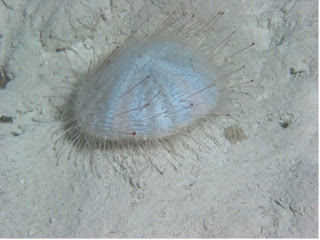 Who, What, Where: Sea Urchins in the Echinothuroida. Most echinothuroids are deep-sea with some shallow-water tropical members (aka the Fire Urchins-see prior post here). They are thought to eat bottom detritus and "macroplant" materials. They have yolky (lecithotrophic)eggs.

How? Sometimes there's cool deep-sea echinoderms that are cool because just KNOWING them is like a cool story. They DO interesting things and HAVE interesting parts!

1. They have little "hooved" walking spines. That's right..echinothuroids often occur on soft, unconsolidated mud..and they have unique little spines that they walk around on with these odd little flat "hooves". 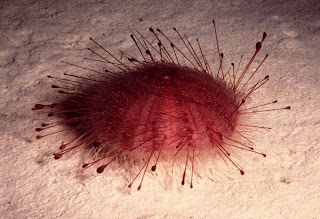 (Araeosoma belli, image courtesy of Dave Pawson, NMNH)
2. The top spines in some species have big, puffy, balloon-like sacs with an offensive substance. Some echinothurid urchins have big fleshy sacs which enclose the spines emerging from the top or abactinal surface.
Based on an study by Emson & Young 1998 these spines are functionally similar to hypodermic needles and may emit an offensive fluid to ward off unwanted visitors. This is similar to the tropical species which have toxic poisons in these spines. 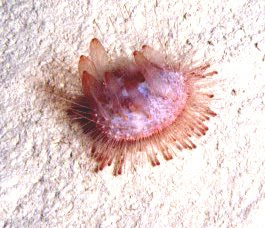 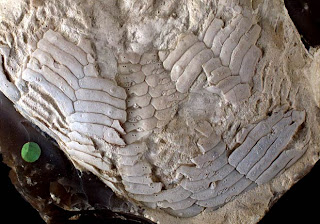 (the Cretaceous Echinothuria shown here from the World Echinoid Directory)

4. The test is decalcified and held up by water pressure. When pulled up on deck? these animals go by the name "Pancake Urchins"

Why? Because echinothuriid urchin tests collapse like a big empty bag of water. That's because in the wild their bodies are HELD up by the positive water buoyance in delicate paper-like skeleton. 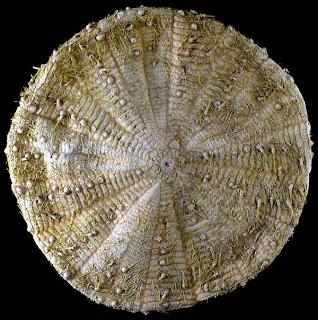 Awesome. Never seen anything like it. What's their geographic range?

The deep-sea ones are widely distributed-Indian, Atlantic, Pacific..don't think I've seen shallow Antarctic or Arctic-but certainly subAntarctic/deep-sea. The shallow, tropical ones are strictly Indo-Pacific tho'

I thought the hoofed spines were cool, but I became a believer with pancake urchins! Do they live below the calcium compensation depth, so it is energetically very difficult to maintain a calcium exoskeleton?

Oh, and the whole fossil before alive thing. Way cool!

Its interesting..but I think that ALL echinothroids have a relatively weakly decalcified skeleton-because the tropical Indo-Pacific ones are kinda soft also..But I should check..