Iconaster longimanus: got a starfish? Share it on the Echinoblog!! 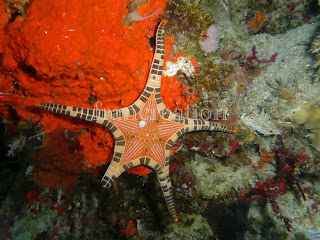 Welcome to the first post of the new year! I thought I would kick-off the year with a new kind of post!

Many of you know that as a taxonomist, I am happy (when i have the time) to identify images of various species that are sent to me from YOU the public. BUT up until recently, I performed this service privately. I am one of the few people in the world who can ID these beasts with some authority, so my time to do "freebies" is at a premium.

So, I was thinking that pics of animals I identify CAN (and should?) BE SHARED with the PUBLIC!

and so here we are.

Today's beast is member of the Goniasteridae, called Iconaster longimanus. A beautiful animal that is found in the central Indo-Pacific, including the Philippines, Singapore, the South China Seas, Indonesia, SE Arabia, and in Northern and western Australia, including Queensland in 6-85 meter depths. You can find a paper I wrote about the taxonomy of Iconaster here.

Today's picture was provided by marine photographer Franca Wermuth, whose website can be found here. My understanding is that she's normally a nudibranch afficionado, but has now added starfish to her list of interests! The animal above was photographed in the Philippines from Romblon (Romblon Province, Romblon Island), next to Lugbung Island in about 35 meters depth. Water temperature was 27.2°.
Relatively little is known about Iconaster's biology. Its name Icon is from the Greek eikon for portrait or image, and possibly refers to the way the marginal plates form a frame around the edge. And -aster of course refers to the word "star".

Its species name longimanus translates into "long hands" which clearly makes reference to the extended arms.

A quote from their blog


What may seem common to divers around the the reefs of Pulau Hantu and the Southern Islands, is actually an animal that is listed as "Vulnerable and rare" by The World Conservation Union's Red Data Book.

The icon star (Iconaster longimanus) is a striking species that occurs on lower reef slopes and the adjacent sea bed around many of the Southern Islands. It feeds on epilithic growth on hard substrata and coral rubble. Zoologically, it is interesting as it has large lecithotrophic eggs which show abbreviated development, without a larval stage. In recent years this sea-star has been found to be moderately common on and around many of the reefs fringing the Southern Islands. However it is considered vulnerable because living on and near the slopes of fringing reefs, it is threatened by reclaimation activities. Additionally, its attractive appearance many lead to over collection as a curio. Such threats are of particular concern given its slow growth rates.

Go HERE to see even MORE pictures of Iconaster longimanus!

The only thing I can add? Iconaster has been made into a plastic toy!

Interesting account. It would be more readable if you used a colour other than yellow for the text!

Hi,
sorry about that, recently changed the blog layout to a light background from a dark one. Its being fixed as opportunity permits. and i've done so here.

If Iconaster interests you check this out:

thanks for the interest!

That's great, thanks for your quick response! My interest is as a writer of species accounts in Wikipedia. I have just written one for this starfish and your Echinoblog often provides useful material.