How Dentures, UV Radiation, Covering Behavior and "Collector" Urchins ALL intersect this week!!!! 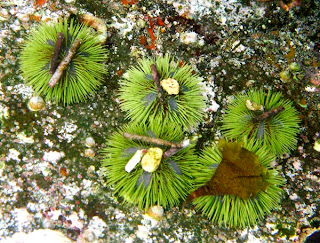 If you have been following the Echinoblog's In-your-face and edgy Twitter Feed, then you have noticed this news jewel in the DestinLog.com,(based in Destin, Florida) that reports the following, curious recent event (highlights quoted below):

As the woman leaned over the boat...the unthinkable happened, the woman's dentures had fallen out of her mouth and into the Gulf. By the time the woman collected herself... the teeth were gone. 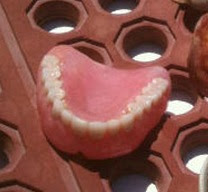 The twist to this tale is that the missing teeth were found...Out on a dive near the bridge rubble, the divers came across the teeth, perfectly propped on top of a sea urchin.(emphasis mine)

“Sea urchins usually like to camouflage themselves in seaweed or whatever, and I am looking down there and the sea urchin had teeth on it,” Epp told The Log Friday morning. “I bust out laughing, trying not to choke on my water. I had to do a double take, I had to look back before I realized they were actually teeth.”

Wanting to help, Birchett took the teeth to the Fishermen’s Co-Op and had a sign made saying the teeth were located, hoping they would eventually be returned to their owner. Through the fishing grapevine, the connections were made and the woman was reunited with her teeth.

Of COURSE, the article omits the MOST important details! What species?? Did you now that this sea urchins' biology may have been directly related to the rediscovery of those dentures?? And what would this have to do with the deadly Ultraviolet radiation in the tropics?

Species! So, we don't know exactly which species it might be, BUT given that its Florida in the Gulf of Mexico, its probably one of two- Lytechinus variegatus -a widespread Atlantic species 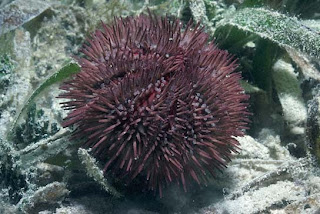 (image from Steve Watts site at UAB)
OR Tripneustes ventricosus. 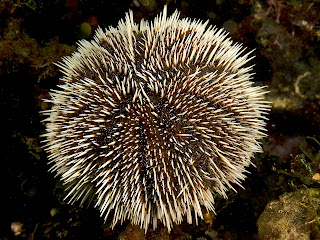 Both are very abundant and commonly encountered species that practice what's known as "covering behavior".. and much of the information in this post comes from two very informative papers by Katherine Amato et al. in a 2008 issue of the Bulletin of Marine Science and a paper by Jessica Sigg et al. in a 2007 issue of the Journal of the Marine Biological Association of the United Kingdom.

What is "Covering Behavior"?? Put simply-Sea Urchins cover their body surface with nearby debris. Presumably, these items are held fast by tube feet on the sea urchins' body surface. Such as this one..

This is practiced by many species of sea urchin from around the world, such as this species from the Galapagos..

and so, the behavior can vary in many different ways, depending on where the animals live.

Here is a video that shows "covering behavior" called "masking" by some, set to a delightful Benny Hill soundtrack...


Why Do Urchins Practice "Covering Behavior"?? And What Does This Have to do with Dentures anyway???

So, the urchins cited in the original article, obviously had been carrying that woman's dentures around, as part of its "covering behavior"!

But believe it or not-there may have actually been a GOOD reason for that urchin to be doing so!
Its tied to WHY these urchins practice covering behavior in the first place.

Sigg (2007) and many other authors have presented evidence that the reason, at least some urchins cover themselves with seeming debris is to protect themselves from ultraviolet radiation, which could conceivably damage their gonads or other tissues (as in most animals).

But, some urchins cover themselves with seaweed versus other species which do so with pebbles and shells? Why do these vary?

(From Ecuador-travel.net)
As it turns out, in some cases, it does!

Below is Fig. 1 from Amato et al. who compares the preferences of two sea urchins (Lytechinus on the left in white versus Tripneustes on the right in black). 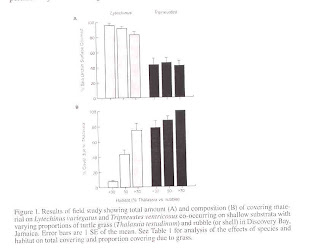 Some dynamics (Based on tests of Jamaican species)


So, the way that Lytechinus prefers covering its complete surface with rubble, suggests that it might be MORE vulnerable to sunlight (and as we'll see UV radiation) than Tripneustes.

Its choice of rubble further follows that trend in that it seeks out items that will prevent penetration of the sunlight.


A further study of Lytechinus by Sigg et al. (2008) showed the preferred sizes of rubble and shelly materials that the urchin collected. 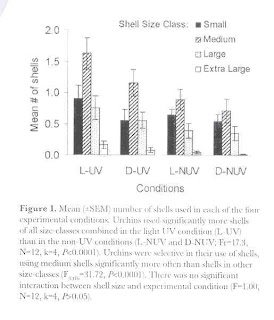 The lab work of Sigg et al., suggested that Lytechinus was indeed suceptible to UV radiation and not simply to light intensity or brightness. Lights alone, apparently did not compel the urchins to cover themselves but UV exposure did, and in fact, UV radiation increased covering behavior!

The bar graph above (Figure 1) shows us that of the rubble that these urchins use to cover themselves, Lytechinus showed a clear preference for (the striped bar in Fig. 1) medium sized rubble/shelly debris!

Given that bunches of small sized shells would be easier to hold onto why choose bigger more intermediate sized shells and pieces of rubble?

Probably because medium sized bits offer better protection from UV exposure. There's no "cracks" or openings if you have fewer, larger sized pieces!!

So finally, this brings us back to the image that accompanied the orginal article in the Destin Log! An image which tells us a LOT about the sea urchin species in question!....

Assuming this wasn't a miscellaneous assortment of shells for a photo op.. this tells us that the likely candidate was Lytechinus variegatus! (otherwise we would be likely seeing more seaweed!) 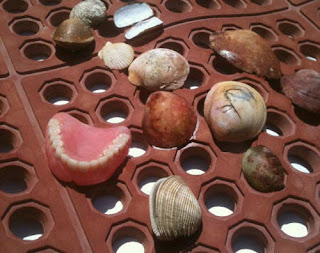 Note the many intermediate to large sized shells! (the preferred cover material)

and the dentures??? Lightweight AND broad enough in size to be capable of broad UV protection/coverage!!

Now, you know the REST of the story! A Florida woman's 1200.00 dental costs recouped? or that individual Lytechinus' best defense against the terrible onslaught of UV radiation??

Knowing that the sands of Destin Florida are brilliant white might help pin down the species.

When I lived there I wondered if I lived in a ocean desert, I couldn't spot anything alive in the water, absolutely nothing, not even tiny fishes.

I kept looking though, and finally found out why.

All the animals near the shore were transparent or white, aside from a few lightly colored hermit crab shells.

I know I never saw a single urchin there despite knowing they had to be around.

I observed the species Salmacis virgulata is also covering coral rubble when this was reared in aquariums.

WOW! Urchins are pretty smart despite their "passive" behavior (as opposed to other creatures at sea). I can't imagine the look on the diver's face when he saw the dentures, but my, that's proof that the make is good.

I havent encountered any dentures so far (LOL)