No term excites a starfish biologist (well, me anyway..) more than trying to figure out what pedicellariae do!

But wait, you've never heard of the word? What are they?  I'm glad you asked!

Pedicellariae (singular pedicellaria) is a blanket term that is used to describe a panoply of tiny claw, clamp, wrench or beak shaped structures that are present on the external surface of starfish and sea urchins.

Pedicellariae absent in sea cucumbers, ophiuroids, and crinoids but seem to have developed as very different structures in sea urchins vs. starfish.

As a generality though, they are used by the animal to interact with the environment. They can grab or protect-but the exact use of pedicellariae in some groups seems... mysterious. I'll treat pedicellariae in sea urchins another day but today, let's go through some examples of what some pedicellariae are known to function as.

In some cases function is known and other times not...There are many different kinds of pedicellariae-but here are some of the best known (and easiest to see..)

1. "Forceps-like" (also called forcipulate) Pedicellariae
These are pedicellariae that are composed of three pieces with two really pronounced wrench-shaped "jaws" that usually have teeth or some kind of nasty looking shank on each piece.

In a lot of forcipulate species, such as this Antarctic Labidiaster annulatus (which I wrote about before here)  they use the pedicellariae to aid in capturing krill!
And in fact there are at least one or two other instances of forcipulate starfish species that use pedicellariae to capture prey.. Go here to see the write up on how some starfish can capture active prey. 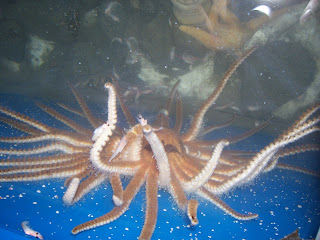 But in Labidiaster, these pedicellariae are HUGE! And NASTY lookin'... The ones in this species are quite large. The one in the picture below is easily a whole MILLIMETER or two across!  (trust me that's big for pedicellariae!) 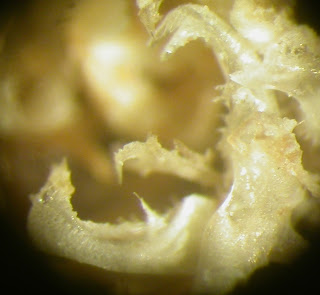 Here's a Scanning Electron Micrograph picture to give you a clearer idea of what they look like and with all of the glorious details!
The pic of the pedicellariae above the SEM was taken from the arm below for scale.. Note the whitish fuzzy stuff on the surface of the arm? Those are the pedicellariae. 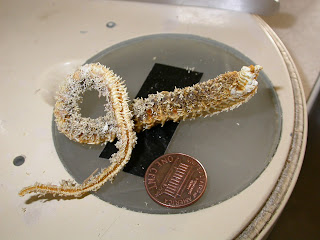 And here's the specimen the arm is from for reference... (a living example is above) 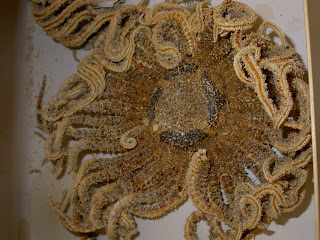 Forceps-like Pedicellariae are formidible and numerous.  Below are some close up pictures of these  tiny structures on two well-known species on the North American Pacific coast: the giant sunflower star (Pycnopodia helianthoides) and the ochre star (Pisaster ochraceus).

Pedicellariae are typically present around the spines in retractable rosettes or pompons, numbering in the THOUSANDS! These could be extended or retracted like gun batteries if the animal felt threatened.

Pedicellariae are smaller in other forcipulate asteroids but can be quite effective.

During the days of my halcyon youth when I worked as a docent at touch tidepools at Steinhart Aquarium and Monterey Bay Aquarium, people with hairy arms had to exercise some care not to completely apply the surface of the ochre star (Pisaster) lest  you wanted all of the thousands of little claws to tear off all your arm hair!


Here's a nice close up of Pycnopodia helianthoides-note the many, tiny white bits around each large white spine. The finger-like translucent structures are called papulae (aka the gills).
Here's a pic of the whole animal for comparison. Pycnopodia are soft to the touch but get quite large-reaching up to 2.5 to 3 feet across! Here's an image of the pedicellariae on Pisaster ochraceus. Pedicellariae are the tiny little beak-shaped structures that are around each spine on the surface of the animal. Those big white things are spines- Here's a pic pulled farther back to give you some scale as to where pedicellariae are found.. There are often several types of pedicellariae on each species. In addition to the ones above Pisaster ochraceus also has these really distinctive ones that look like claws rather than beaks! 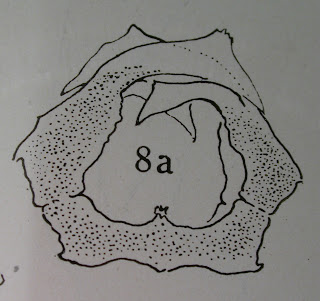 There are a few species of forcipulate asteroids that display how pedicellariae are used-probably for feeding and maybe defense.

But let's look at a few other weird shaped ones...

Starfish in the Goniasteridae and the related Oreasteridae have a different type of pedicellariae. These are flattened and more "lip-like" and can be VERY abundant on the surface of some species. 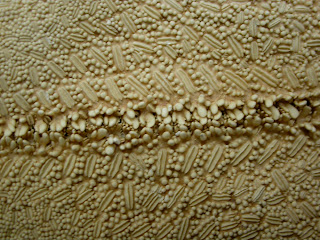 And if we want to take those bivalve pedicellariae to extremes.. here's a genus and species of deep-sea goniasterid I described a few years back from New Caledonia..called Akelbaster And there's some pretty neat triads of bivalve pedicellariae on this beast.. the goniasterid Eknomiaster beccae! This was another species I described awhile back.. 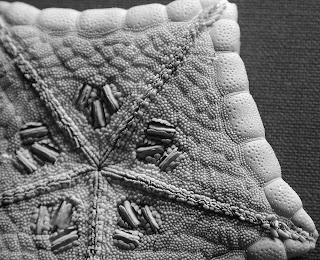 Some bivalve pedicellariae are not only large but also a bit taller such that they actually seem like large clamps! And here is a closeup showing several tinier bivalve pedicellariae on the surface of a tropical oreasterid fron Singapore:  Anthenea aspera. The pedicellariae are the tiny little white clamp-shaped structures.. Very neat looking-but again the question: WHAT DO THEY DO??

Do they use them to protect themselves from small, annoying crustacean predators? Do they aid in feeding? Some weird biophysics thing we've not figured out yet???

And then, every so often you get an especially weird and large pedicellariae such as the one you see in the deep-sea Antarctic Chitonaster felli...

The pedicellariae are these five huge pincer-shaped structures that are present on the surface of each interradius. 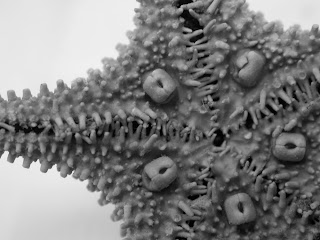 Each one seems to be made up of two clamp-like components... 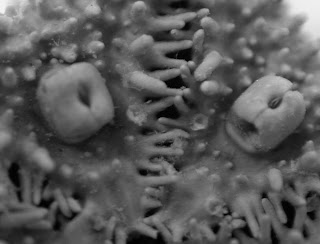 But again the question?? What are they used for? Why so big in this species but so small in its sister species?  How would the animal use these as a defense?  What other function might they be used for?

Scientists have been observing pedicellariae for literally 100s of years (they were originally described as animals! if you can believe it!) but a good understanding of these structures has been elusive! Its weird stuff like this which makes echinoderms such a joy to study...
Posted by ChrisM at 10:39 PM

As for Chitonaster, can we perhaps, capture a few and maintain them in captivity for a while? Is it feasible to do so, once we know what it feeds on?

Great notions! thanks for the interest-but sadly, easier said than done in some cases.

Chitonaster is from the Antarctic and this species lives quite deep, below 1000 m.

Stylasterias is familiar to many but other than 1 paper from the 70s or so the feeding behavior isn't well studied..

Not related query though but I was wandering if the echinoderms(wrt Asterias sp.) possess regular spines on both the surfaces of the body.