Data for this post was derived from Maria Byrne's 1996 paper in Marine Biology: "Viviparity and intragonadal cannibalism in the diminutive sea stars Patiriella vivipara and P. parvivipara (family Asterinidae) vol. 125: 551-567 which is a pretty neat piece of work that set the groundwork for their paper in Biology Letters which was just published today! Today's post has been reported in the news (here) .

Our story begins with an overview of two unusual and quite tiny starfish! Some details:


Indeed! Look how cute and tiny they are!
But the  truth is that these tiny little starfish have all kinds of shocking sex secrets!

1. Both Species of Parvulastra are self-fertilizing hermaphrodites.
I have written about similar species in the same genus (Parvulastra) here.
Yes, that's pretty much self explanatory. Individuals are simultaneously both male and female AND if need be they can fertilize themselves.

They typically have between 6 to 8 female gonads and 1 predominantly male gonad. However the amount of sperm present would not be expected in those species which are exclusively self-fertilizers-so SOME outcrossing (ie sex with other individuals) does occur.
2. Parvulastra broods juvenile starfish in a brood chamber (aka "live birth" aka viviparity)
Several species of starfish are known to possess "brooding" behavior (I've written about them here). That, is the adult "carries" either internally or externally several tiny juvenile starfish with it until they are ready to move off on their own as full adults.

Each adult Parvulastra carried multiple juveniles across a range of sizes. Here was one example of a clutch containing 30 individuals from ONE large individual. Number varies with size..

These further images from Byrne's paper give you an idea of where they are located. Essentially throughout the body cavity between gonads. This differs from other species which can have them living around the mouth or in other locations.
So, eventually, those little baby starfishes have to leave the comfort of the mother's body cavity. This happens when they reach about 25-30% of the parent's body diameter.

The downside of having brooded juveniles is that they tend not to go very far from the adult. In other species, the larvae would be dispersed over wide distances but here, they are retained or crawl away, staying near the parent..

Eventually, they exit via openings in the abactinal body wall called GONOPORES.

But what motivates the exit?

3. Those juvenile starfish are cannibals! (aka intragonadal cannibalism)

Life is harsh and these starfish know it better than anyone. The gonads in these animals are pretty small which implies that food for the juveniles isn't really enough to keep them sustained on their own..

So, as soon as the brooded juveniles develop a mouth they begin feeding on their siblings in the body cavity! In the specimens examined several of the larger brood individuals, which contained traces of the smaller ones in their gut contents in addition to other observations..

Several possible reasons may motivate the departure of the smaller juveniles from the brood space. Temperature or any number of factors.

Byrne speculated on one reason that juveniles may vacate in order to avoid being fed upon by their larger siblings.. Here is a cartoon supplied by the Echinoblog Art Dept. which illustrates this notion (which to be honest was mentioned as only one sentence by Byrne in her paper). 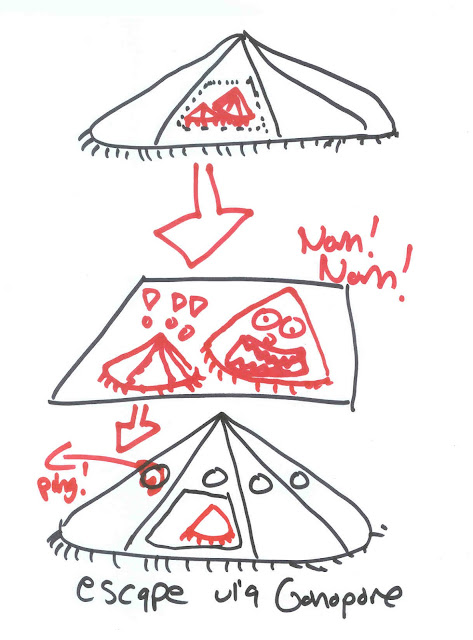 Thus starfish join the illustrious ranks of those animals which have active, intrachamber type young which feed on one another including sharks, fishes and salamanders and insects-although there's a bunch more..

4. Exit to the Outside World!
Ultimately, then we see various brooded juveniles vacating the brood space via the gonopores (which flex and open) with the tiny juveniles emerging on the surface and eventually moving away...
Thanks to the intragonadal cannibalism however, sometimes you get a REALLY big one which continues to grow INSIDE the parent.  Ultimately reaching a size at which it cannot physically escape on its own..

Yikes! Talk about living in your parent's basement!
5. Reproductive Impact on Populations

As indicated above, a recent paper by Carson Keever and others has found some significant drawbacks that this unusual reproductive behavior will have on populations of Parvulastra.
So, there is serious concern about these species to withstand any kind of temperature or climate shift. The populations of these live-bearing starfish species is pretty small and pretty restricted. Potentially any kind of abrupt habitat change could wipe out these starfish with these unusual life modes..
Posted by ChrisM at 10:04 PM

We have a small population of P. vivipara near our Marine Discovery Centre (accidentally introduced by the MDC in the 1990s). Sometimes my students find them on foreshore walks (which is great), and we also find Parvulastra exigua. Sometimes we find what looks, superficially, like a hybrid both species, a little too orangy-green or a bit too greenish-orange. I know that p. exigua can be quite orange (one of your previous articles shows a very orange one) but do you think it’s possible for these species to hybridize? Thanks, Andrew Walsh (http://education.tas.edu.au/woodbridge/mdc/default.aspx)

Andrew,
Certainly other asterinids are known to hybridize: http://www.jstor.org/stable/2410469

but offhand I don't know if these do. In my experience, good evidence for hybridization isn't very frequently encountered. Forms that have "in between" morphology could be caused by phenotypic/ecological effects. Maybe a project for you or a student to undertake!