Last week, I had a pretty fun conversation with some colleagues, namely Anna and Ned deLoach at Blennywatcher.com, about benthic comb jellies and Its been awhile since I've had a chance to play "lets run through Flickr and see if we can discover anything new", so I thought I'd try my luck this week again !!

What are benthic ctenophores (aka benthic comb jellies)? I've explained them before in one of my earlier posts (here), but simply put, they are an unusual group of comb jellies, which you might be more familiar with as purely pelagic or swimming animals, such as this "sea gooseberry"


They swim with the shimmering paddles you see in the video and feed using those long tentacles as they are dragged through the water behind it...

Benthic ctenophores (aka bottom-living comb jellies, benthic comb jellies, sessile comb jellies) are basically the same idea except that the animals live on bottom substrates. They occur in tropical habitats and in shallow to deep-water settings.

Here's a nice pic of a species which lives on coral (image by Ria Tan and my friends over at Wild Singapore). You can see the tentacles doing the same thing..but oriented "upwards" away from the bottom.. and into the current. 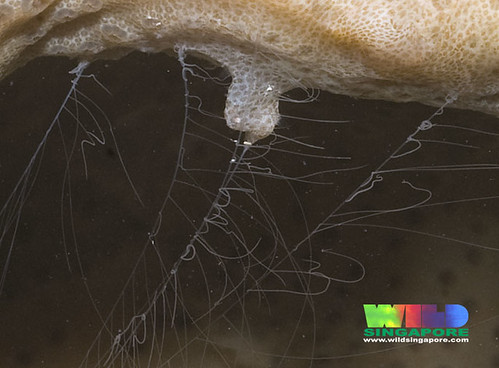 In the last few years with the proliferation of video and underwater cameras, we've been seeing more and more of them. And so, learning more and MORE about them!!

Anna and Ned over at Blennywatcher.com for example were very lucky in that they were able to capture one such animal FEEDING for the first time ever!! (Here)

One of the main reasons, I got so interested in benthic ctenophores was that they live primarily on a starfish, Echinaster luzonicus, a 6-7 rayed species frequently encountered throughout the Indo-Pacific.

The ctenophore species is presumably Coeloplana astricola (no specimens examined, so hence my caution). As you can see in the picture above.. the feeding tentacles project up into the water to feed as they do in other species.. 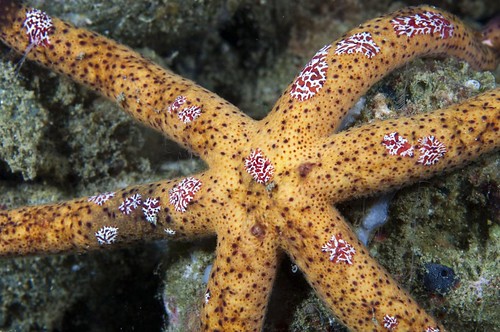 Based on this cool video made by blennywatcher.com, there appear to be different species of benthic ctenophores present on each individual host. But usually not more than one species per host...


Other hosts? Interestingly, a review of images on Flickr reveals at least ONE other sea star that serves as a host for Coeloplana.., Another species in the SAME genus as E. luzonicus.

This one is called Echinaster callosus. A weird but colorful starfish with big puffy protrusions on its body surface... 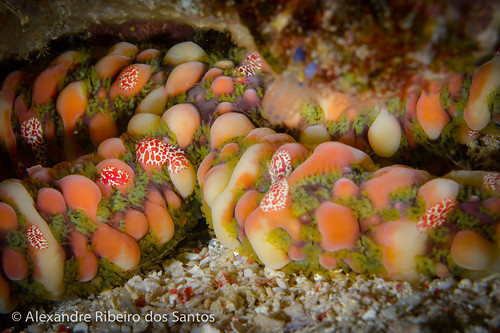 Here is one of the benthic ctenophores of the surface with its feeding tentacles extended... 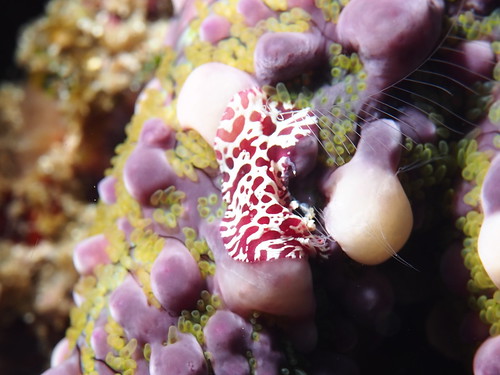 
Are these new records of hosts? I couldn't find these in my brief review of the literature, but I'm not a benthic ctenophore expert....

How Far Can they GO?  Another question we always ask when we see stuff like this, is just how MANY of these ctenophores can "pile on" to a host starfish??

This looks like a LOT. At least 20 to 30!! Nearly covering the surface of the starfish.. 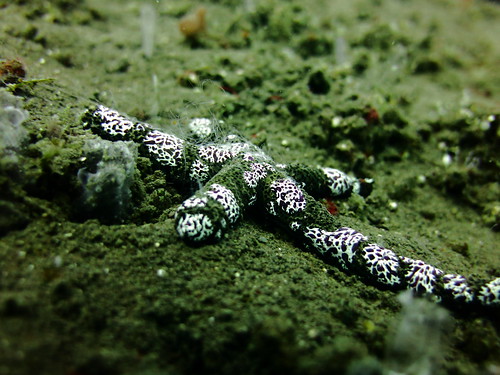 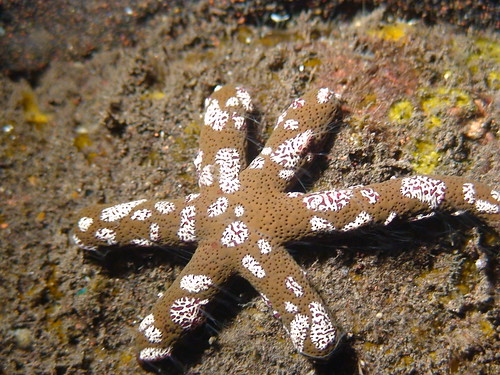 Another one mobbed by benthic ctenophores! 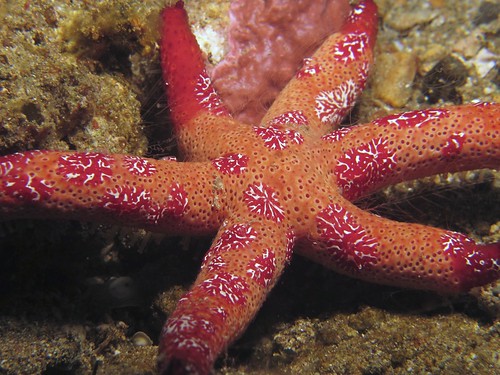 and GREAT scott! this one is almost completely covered by them. By my count? About 40 to 60 of them.. but the outlines of each ctenophore are hard to make out... 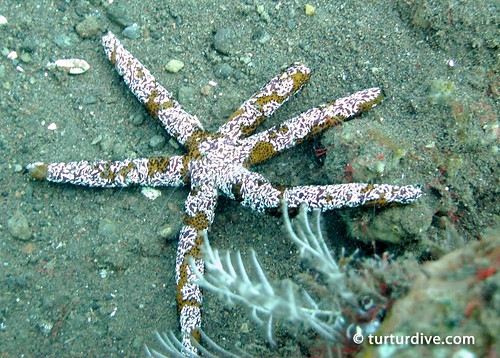 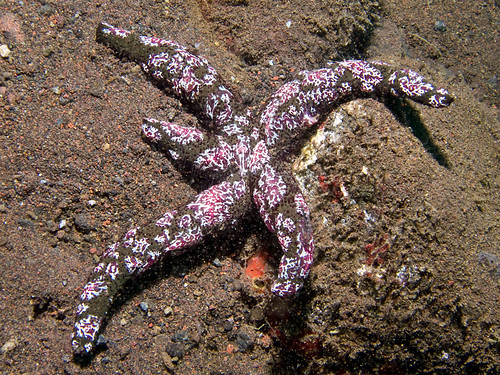 Here's one with 4 arms being regrown also completely MOBBED by these ctneophores.. covering the surface 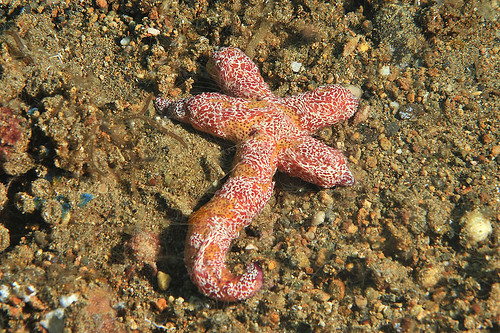 Some individuals of E. luzonicus end up being practically a hotel for commensals! This one not only has the benthic ctenophores but some polychaete worms as well... 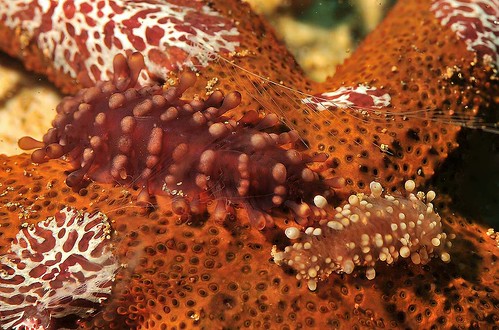 Getting away from the benthic ctenos that live on sea stars, there's also been some cool observations of some others from Flickr and Twitter.. 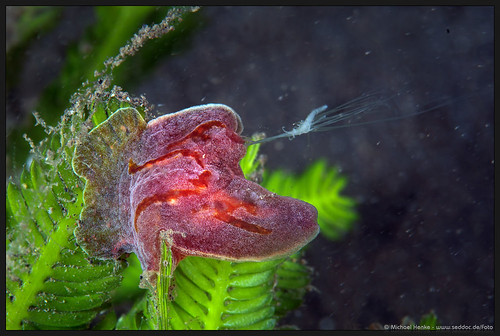 From my colleagues in South Africa are a bunch of images via Twitter of something similar to Lyrocteis, a larger "bunny eared" benthic ctenophore from about 100 m off the coast of Natal...


Some of these are just unearthly..

and finally, from my friends at the California Academy of Sciences (Steinhart Aquarium) the curator of the "living collection" Bart Shepherd tweeted these


"The starfish, about a half dozen, travel rapidly around the bottom in bursts that last about 15 minutes and during those times, I see the ctenophores snag two crabs, another fish and yank a poor tube worm right out of its tube."