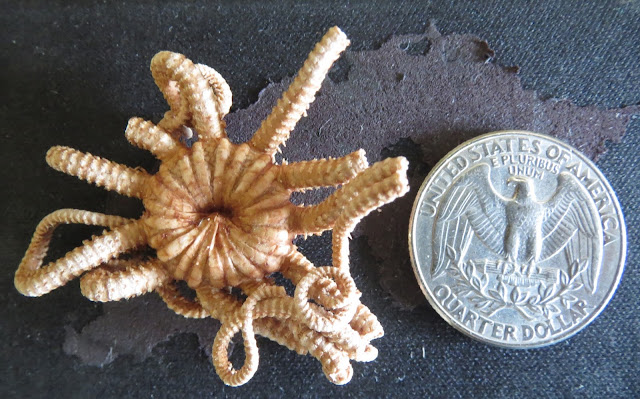 I've often talked of my love of multi-armed sea stars. BUT brittle stars can have more than five rays (arms) also!!

So wait, there are ophiuroids (brittle stars, basket stars, etc.) that have MORE than 5 rays??
Yes.
Most sea stars (close relatives to ophiuroids) have 5 rays, but a significant number of them have more than five rays and there are some entire groups of sea stars (e.g., the Brisingida) which are characterized by having multiple arms (six to 20ish). When sea stars have more than 5 rays there tend to be about 7 to 15 of them. But some, such as the Antarctic Labidiaster can have up to 50.

What one sees in most  starfish species is that multi-armed sea stars tend to be large, highly mobile and predatory. This tropical, shallow water Luidia maculata for example demonstrates all of those qualities. 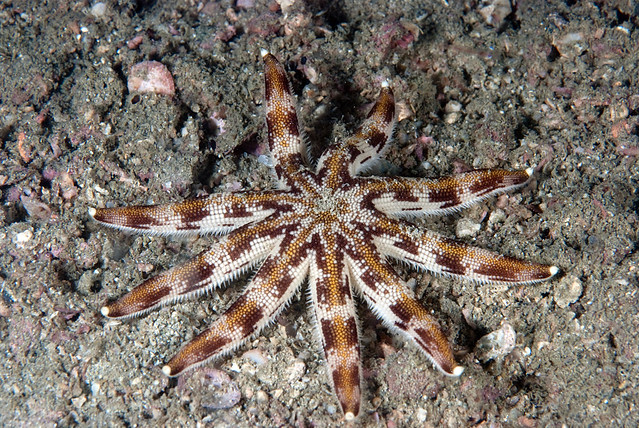 In contrast, Multi-armed ophiuroids have different patterns than what sea stars demonstrate. Ophiuroids tend to be either six to seven rayed or 10 or more. Generally none with intermediate arm numbers (i.e., 8 to 9) and no species are known with more than 12 rays.

Certainly no 20-50 rayed beasts like the sea star Labidiaster. And as we'll see, there's no apparent ecological association with having more than 5 arms in ophiuroids.

The multi-armed condiiton occurs  in many, many different groups of asteroids throughout evolutionary time (here) and has evolved multiple times throughout the group. This is also the case for brittle stars...
(My thanks to Dr. Sabine Stohr for assistance with names!)

Diversity in Multi-armed Ophiuroids
Most brittle stars have 5 rays. Having more, implies that the extra arms are somehow adaptive or suggest that the added investment to develop one further body part is somehow consistent with the life mode of the animal. Most ophiuroids appear to have a much more invested skeleton compared to asteroids, so it would seem that adding more arms is much more of an investment in development,


Low numbered multi-rayed brittle star species, those with about six to eight arms are not uncommon and seem to show a fairly diverse range of habitats. But the ones with more than 10 rays are more seldom seen.

This one for example is Ophiothela danae. 6 rays. These occur in tropical-shallow water habitats and live with their arms wrapped around the stalks of sea fans and sea whips.  Does the sixth arm help facilitate this lifestyle??

This species appears to be successful. It occurs widely in the tropics and has "invaded" the tropical Atlantic from the Pacific. 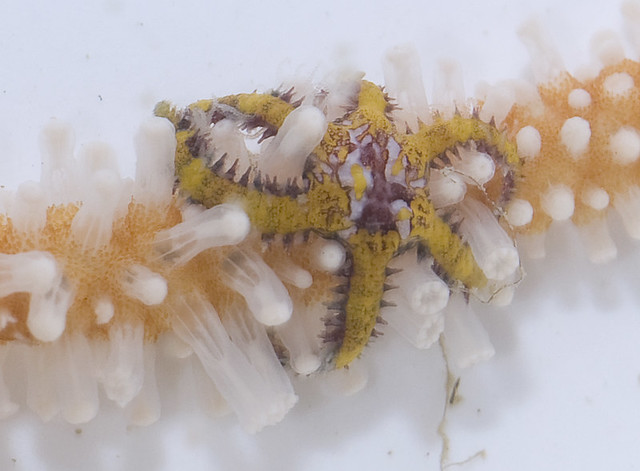 Here is Ophiactis savignyi, a brittle star that reproduces both sexually and asexually (i.e. it divides in half) brittle star which occurs globally all around the world (read more here). Perhaps its sixth arm is part of the asexual condition? Or maybe its cryptic life style? 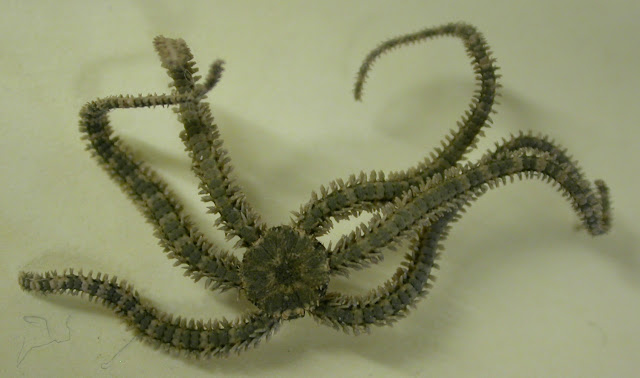 Here is Ophionotus hexactis. Six arms. Adaptive? Predatory? Highly Mobile? An animal I'm not sure much is known about it. 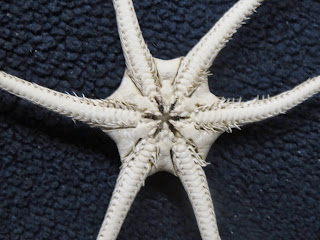 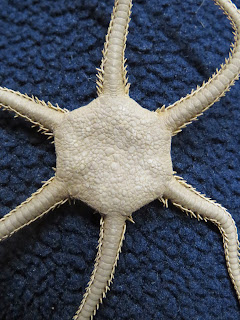 But on the OTHER hand, here are some Antarctic brittle stars, such as Ophiacantha vivipara which have SEVEN arms. Its a brooding species (i.e., the adults raise babies on their bodies). Not sure how this benefits the animal. Maybe in feeding?  Aids in parental care somehow? Or maybe its just an incidental feature? 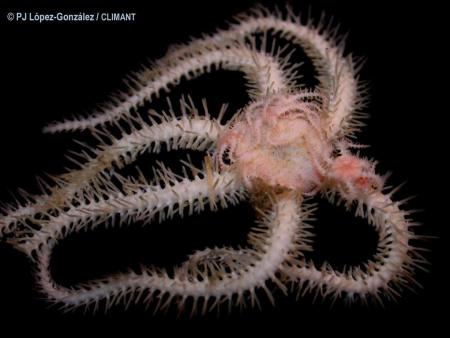 There are a few more species of ophiuroids that show six to seven arms than I've shown here. But for various reasons (i.e,  I either didn't have pictures of them, space, etc) I haven't included them. Several species of serpent stars in the genus Asteromorpha for example can demonstrate six or seven arms.

Species with more than 10 arms

Ophiacantha enneactis & O. decaactis. The genus Ophiacantha, is kind of unusual because it includes several species which possess more than 5 arms (see O. vivipara above).

These are similar species and both are pretty small. What they do down there in the deeps with all their arms is "poorly understood." (i.e. we don't know). Perhaps suspension feeding? Predation? 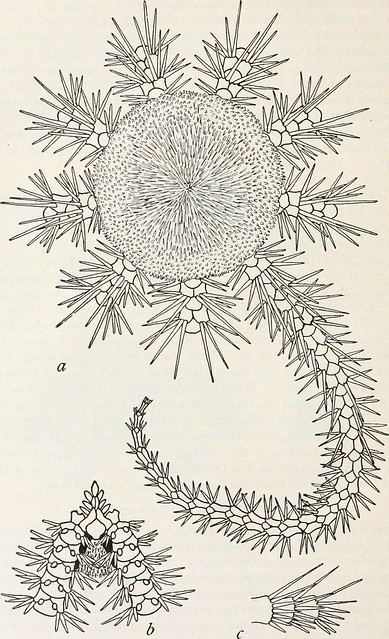 Ophiacantha decaactis Belyaev & Litvinova 1976
Astrochlamys sol Probably the winner of ALL the multi-armed ophiuroids though is this species: Astrochlamys sol, a bizarre Antarctic form, which is a member of the Gorgonocephalidae, so its actually a modified basket star. 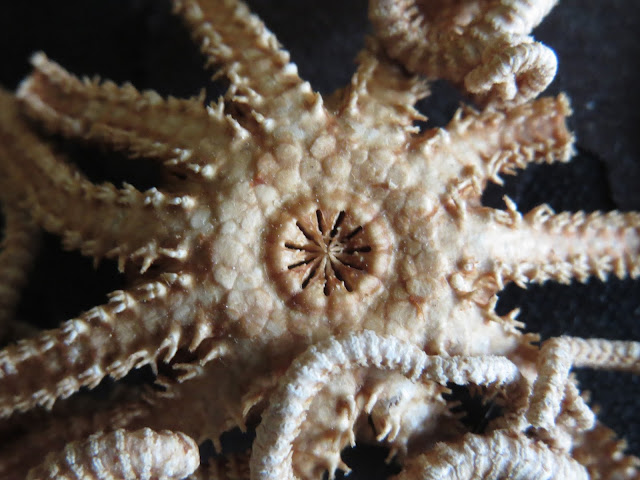 I thought Basket Stars already had more than five arms??
Basket stars are a subdivision of ophiuroids called the Euryalida. They tend to have big, thick arms with fleshy tissue covering over their skeleton. These ophiuroids extend their arms into the water column and usually have hooks or long arms to feed on food or prey as it swims by..

I've written about one particular basket star, Gorgonocephalus here.   But there are a fair number of basket stars in cold water and tropical habitats.

Note that although there seem to be many arms, there are in fact ONLY five. But they branch... 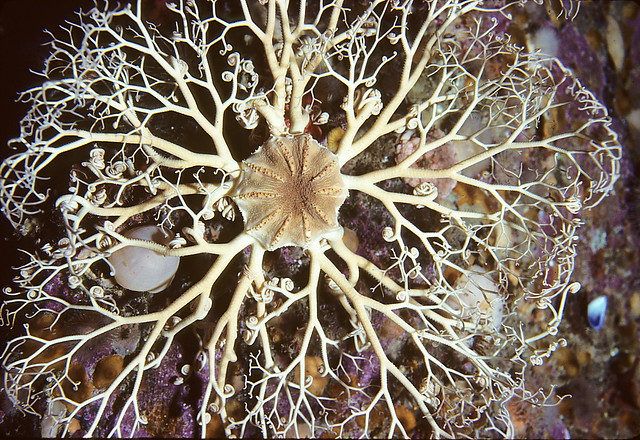 Below is the underside of Gorgonocephalus, the cold-water basket star from the Arctic/subArctic. Note that only five rays radiate away from its mouth. The  arms bifurcate or split for several iterations away from the five primary rays on the disk.. 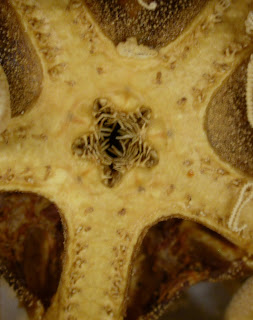 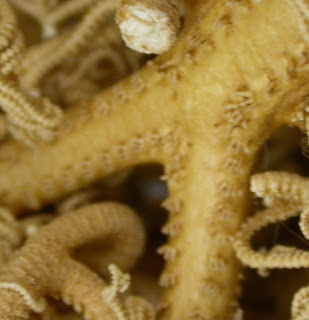 That's what makes A. sol, so unusual. It actually has 10 to 11 arms!! Making it the ophiuroid (not technically a "brittle star") with the MOST number of arms!
Its species name "sol" refers to sun, which likely alludes to its arms radiating away from the mouth.

This species occurs in the Antarctic in fairly deep depths 300-1200 meters. It was described by the famous echinoderm taxonomist/biologist Theodor Mortensen in 1936 in his HMS Discovery monograph. We apparently don't know much about its biology aside from the fact that its a brooding species and tightly hugs its substrate...
On a personal note I'm always fascinated by these forms. Unusual in appearance but also kind of mysterious.  What does it do with all those arms? What is so unusual about deep-sea/cold-water/Antarctic species that they have so many arms? Is brooding related?

Really fascinating...
Thank's so much for sharing that.