This week: Some cool examples of predation by a predator, you've probably NEVER heard of! And yet, they are deadly, efficient and can take down prey or food that is MANY times their body size.

I am of course talking about the Nemertea aka the Ribbon worms (or sometimes the proboscis worms)! This is actually a whole PHYLUM of worms, which in spite of their superficial appearance, are actually VERY different from flatworms and have a very significant number of internal features..

There's somewhere in the neighborhood of 1300 species of ribbon worms. Most are flattened and can be VERY elongate with some (e.g., Lineus longissimus) approaching 60 METERS (nearly 200 feet) long! Most occur in the oceans but there are freshwater and terrestrial species as we'll see.

Here's a nice summary of info from the Smithsonian magazine.


Relevant to today's post is that many nemertean worms are PREDATORY.

They capture food using an eversible proboscis which, thanks to the internet's fascination with weird, gross stuff, you have undoubtedly seen in a variety of formats. Here's two of the popular ones: the red Thailand species expelling its bizarre, almost fractal proboscis:

This proboscis is one of the primary defining characteristics of this group.

and of course this green one from Taiwan!

According to an interview with Dr. Jon Norenburg in the Invertebrate Zoology Department of the NMNH, the proboscis of nemerteans is ejected from a body cavity and used to capture prey. Often times, they can capture prey that is THREE TO FOUR TIMES larger than their body!!

Here's the thing though, the above two video/gifs? Showed these animals in stressed situations outside of their natural environment. And NOT demonstrating their mastery of their predatory proboscis appeasing their ravenous rhyncocoel!

These animals likely represent a HUGE ecological impact which is probably difficult to study owing to their rather cryptic nature.

Here today is a nice little collection of ribbon worms "strutting their stuff" with some GREAT images showing attacking/devouring prey (thanks to YouTube and Flickr!)

Some ribbon worms such as these huge Antarctic ribbon worms (Parborlasia corrugatus) are both scavengers AND predators and have been reported as feeding on nearly ANYTHING:  fecal pellets, starfish, dead seal meat, fish, sponges, sea anemones, worms amphipods, penguin meat AND sardine meat with tomato sauce! and on and on.... 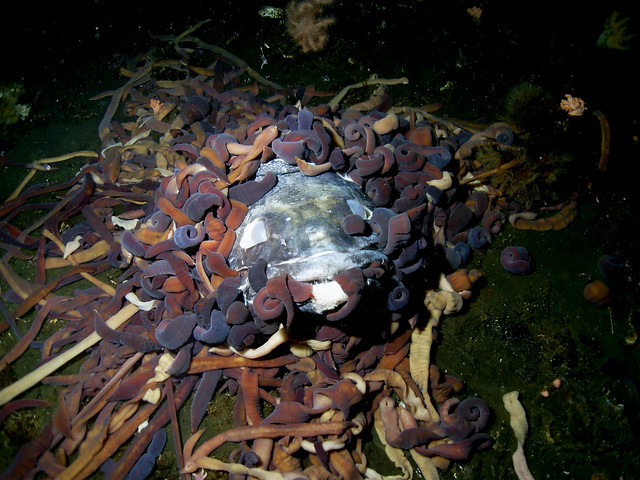 5. POLYCHAETE WORMS! Polychaete worms of various types appear to be a popular food among ribbon worms. 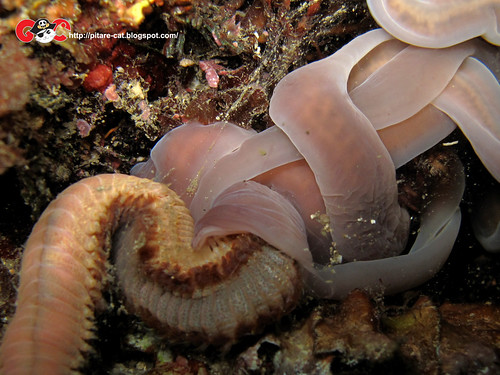 This one is impressive. You can actually watch the proboscis IN ACTION as its used to attack its polychaete prey!

Here are pics AND video from Florida of the ribbon worm Tubulanus feeding on a feather duster worms (a filter feeding polychaete).  Here's a nice shot showing it attacking the "head"
And a separate video showing another interaction with the same two players!


4. CRUSTACEANS!!
From two different sources. Marvyn Yeo shows us this ribbon worm seemingly coming up behind a tiny crab..

And this video shows us a ribbon worm feeding on this amphipod!

Ribbon worm (nemertean) eating an amphipod crustacean from LabNemertea on Vimeo.
and even mysid "shrimp"!


3. INSECTS and land arthropods
Most ribbon worms live in the ocean, but a sparing few have gotten into freshwater and even terrestrial habitats! And yes.. with those same predatory habits!

I'll be honest though, some of these can be pretty difficult to ID even to phylum. these were identified as ribbon worms but I suppose they could easily be flatworms. 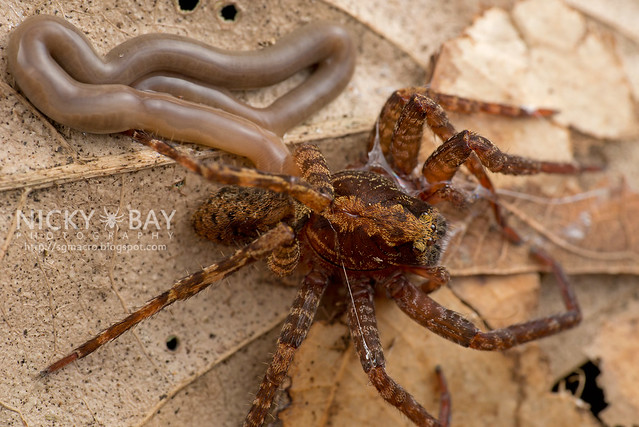 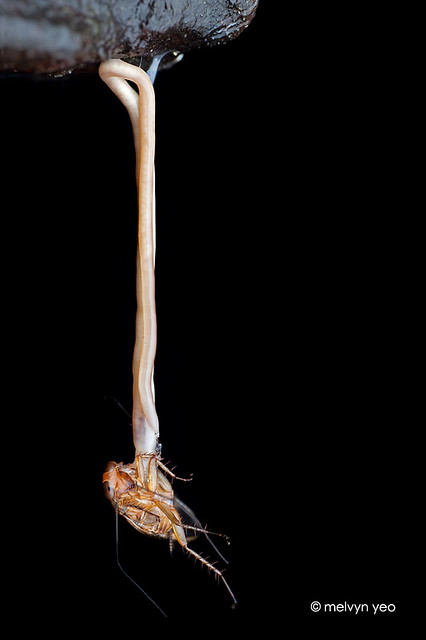 2. Snails! Flickr users Marvyn Yeo and "Paul" brings us stunning pictures from Asia and Ecuador showing this ribbon worm attacking this snail! Apparently by working its way into the shell aperature and attacking the animal in its own shell. 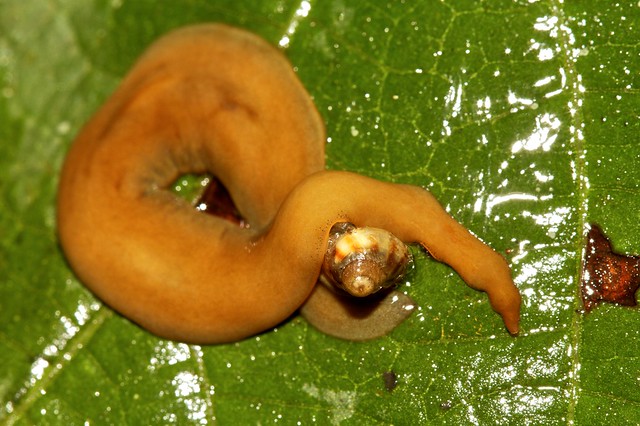 1. FISH!! and finally the pièce de ré·sis·tance! To be sure, I'm don't think that these worms actually captured these fish, BUT they are very clearly DEVOURING THEM.

Many ribbon worms have a stylet or thorn which is thought to deliver a toxin against some prey items.. so is it entirely unreasonable to suggest they capture fish, esp. prey much larger than them? Probably not.

This one is from the Falkland Islands/Malvinas.. 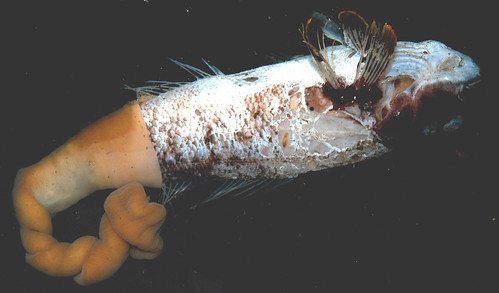 Here is another GREAT feeding observation in VIDEO with a professional commentary by ribbon worm expert Dr. Jon Norenburg at the No Bones blog! here  This one shows a ribbon worm devouring a HUGE fish from a reef in the Cayman Islands.

But good grief: LOOK AT THAT! Amazing.

And of course leave it to the folks at Tokyo Sea Life Park to capture this AWESOME video of Parborlasia corrugatus An Antarctic ribbon worm devouring this mackeral in time lapse! (Although Parborlasia is pretty big relative to that fish-its still impressive to watch)


LOVECRAFTIAN FOOTNOTE
So, I am enough of an old Lovecraft/Cthulu "unnaturalist" to recognize the similarities between aforementioned nemerteans and Lovecraft's famous wormy Dholes! Images shown here from Fig. 8 (Petersen et al. 1988- Petersens' Field Guide to Cthulhu Monsters) on the left and on the right from YogBlogsoth.

The proboscis is close..but I'm thinking.. polychaete instead (dholes do seem to be segmented worms after all)? But that only suggests that if dholes are derived polychaetes than a giant Cthuloid Ribbon Worm may yet be lurking in the darkness.... 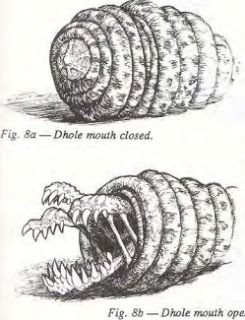