If you had asked me 10 years ago if the echinoderm group we would be learning the MOST from would be the OPHIUROIDS I would have been skeptical.

Plus, Brittle stars were tiny, numerous, CRYPTIC animals. Who would study them?

I'm sure we would see "big picture" stuff from sea urchins, sea stars or maybe even crinoids. But brittle stars? It would take a LOT of work to make them an "ideal" animal to work off of....


This week a BIG NEW PAPER in Deep-Sea Brittle Stars dropped in the pages of NATURE!

I'm sometimes quite happy to be proven wrong!

You can get the paper HERE.

In other words, Tim identified, requested and/or otherwise retrieved THOUSANDS of records of brittle stars! When you consider how MANY specimens of ophiuroids there are? That is a HUGE effort!! 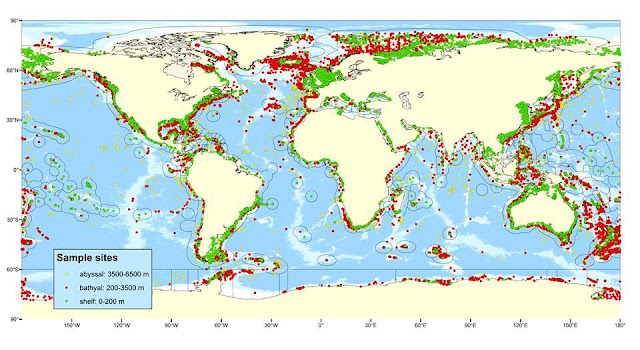 Based on this analysis of species records correlated with different habitats, especially across different depths, they were able to determine several broad based and IMPORTANT patterns about WHERE brittle stars occur..
In other words, warmer water (heated by the tropics) promotes greater species richness.

The yellow and red in the diagram indicate species richness. These are warmer areas with                    relatively high nutrients, etc.  As the colors fade to purple and blue we see those numbers
decrease on the broad abyss of the ocean floor.

If this is the case, then our conservation efforts will need to focus on MORE than simple high species diversity. We'd need to further look at places which are DEPENDENT on diversity!

In some ways, brittle stars are one of the most important "model animals' to observe these trends and interactions. Why?

1. Echinoderms, including brittle stars live ONLY in the oceans. No freshwater, or land relatives.

2. Brittle stars are EVERYWHERE. They are one of the most numerically abundant groups of echinoderms known. 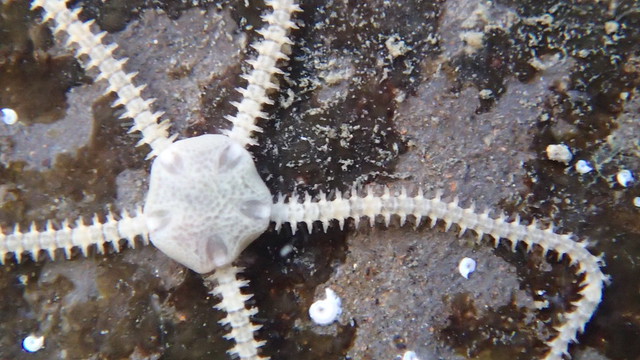 This paper is the latest "big thing" to come out of Dr. Tim O'Hara's echinoderm lab at the Museum Victoria! 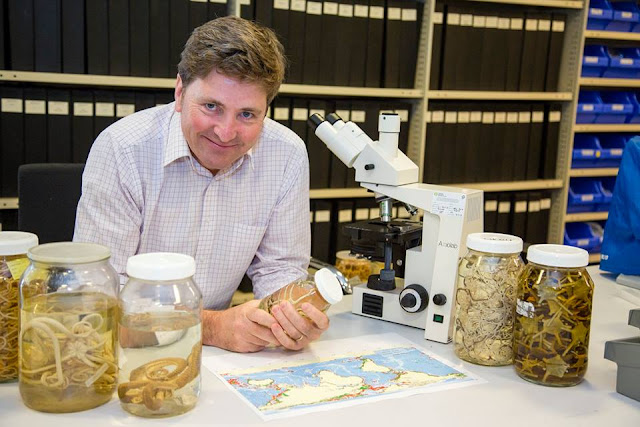 The Nature paper is sort of the "other shoe" that has dropped with big discoveries. (Remember that
echinoderms have five shoes!)

Dr. O'Hara's other BIG news  in recent years has been the announcement of this: a comprehensive family tree of the ophiuroids!

The Brittle Star Phylogeny Project
One of the most important and fundamental elements of biology is understanding the evolution and relationships of your study organisms.
A phylogenetic tree helps to answer all these kinds  of questions!

In biology, a well-supported tree with a strong data set supporting it is BIG DEAL.  You can literally put ALL the information known about a group, in this case-the brittle stars, into a PROPER evolutionary framework!! Perhaps some lineages share a particular ecological nice mirrored by body form. A tree like this can literally be mined for information for years.

This starts with such immediate things as classification and rearranging all the families to reflect "natural" groupings. In other words whether taxonomic groups such as families or genera-created by scientists based on external characters are "real" or perhaps the result of misleading external appearance. At some point, there's probably a whole POST about that topic!

This kind of data is a POWERFUL statement. 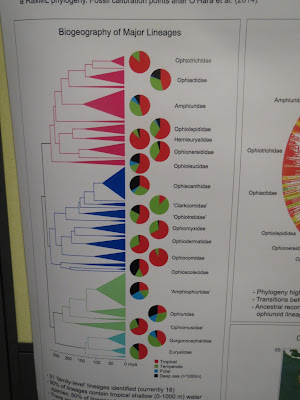 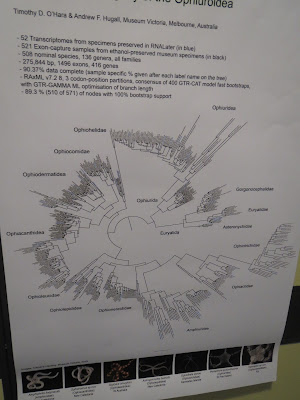 Genetics is powerful stuff. Work on the "Big Tree" of ophiuroids suggests that there are many, MANY more families and SEVERAL orders of magnitude more SPECIES.

Past accounts have estimated about 2000 species?  In fact there are likely several TIMES MORE than that. But the exact number remains to be seen..

The work from Tim's lab has nearly DOUBLED the number of recognized FAMILIES of Brittle stars!

He's also turned the classification of these animals on their head! some of the oldest known species turn out to be these interesting deep-sea forms.. Ophiomusium and their relatives! Many surprises!
You can sort of see how this ties in with the brittle star distribution paper.. How many of these points on the tree will show relationships between deep-sea and shallow-water species??

These efforts are some of the latest results from Tim O'Hara's "Big Data" ophiuroid work!

Remember that the fundamental basis for ALL of these projects has been Tim's skill in TAXONOMY of brittle stars. Many of these species were difficult to identify and reconcile without skills in how to tell them apart.  Here was an account of Tim's work at the Museum national d'Historie naturelle in Paris! He identified over 1000 specimens while I was there.

Other past efforts from Tim's lab:
Here's the time he and his student worked on the mystery of cryptic species in the Australian biscuit star Tosia australis! 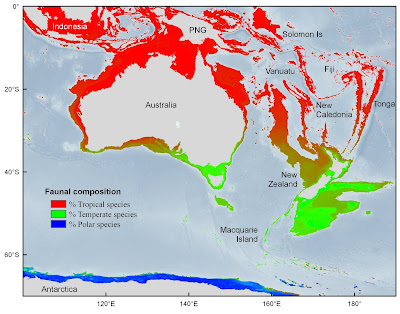 and he identified the many, MANY brittlestars of "Brittle star City" (see the account here) 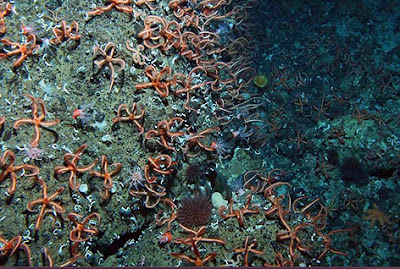 We'll be seeing more on Tim's lab NEXT WEEK! As Echinoblog continues on in AUSTRALIA!!
Posted by ChrisM at 3:19 PM