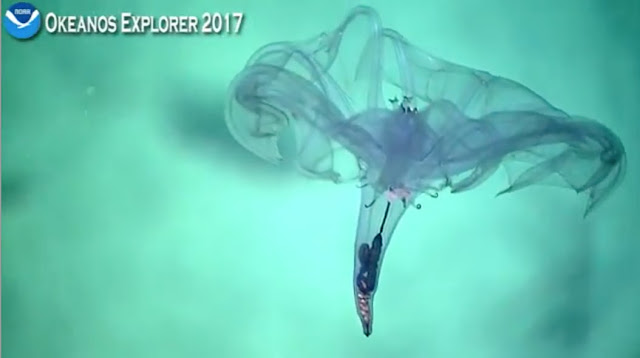 Over the last 10 days or so since Okeanos Explorer has resumed its ROV-telepresence based exploration of the Phoenix Islands and adjacent areas in the tropical Pacific they've seen some REMARKABLE animals of all kinds, from corals to siphonophores, crabs to ribbon worms, etc... but particularly ECHINODERMS!

Before I get into the cool pix.. remember NOAA OPERATES Okeanos Explorer!! NOAA has been threatened with severe budget cuts. CONTACT YOUR CONGRESSIONAL REP AND TELL THEM THAT NOAA IS AN ESSENTIAL Agency!

1. PELAGOTHURIA!  The "TRUE" swimming Echinoderm!!
I have written about this amazing animal before when I found an image of it misidentified as a jellyfish in the Galapagos Rift 2011 Okeanos photo gallery and have written at some length about swimming sea cucumbers here.

Basically, almost all sea cucumbers and indeed most echinoderms are benthic..that is they live entirely on the sea floor and never get into the water column the way fish or jellyfish do.. Yes. Some sea cucumbers can swim but ultimately they return to the bottom.

Pelagothuria is unique because it LIVES SWIMMING in the water column! Similar to the way a jellyfish does. As a result of its strange lifestyle, it has MANY bizarre adaptations and looks unlike most other sea cucumbers much less other echinoderms!

Its not a commonly encountered animal..and we live in a wonderous time that we can see several minutes of HD video of this seldom seen animal swimming by...

The video for this can be found HERE:  http://oceanexplorer.noaa.gov/okeanos/explorations/ex1703/dailyupdates/media/video/dive08_seacuke/seacuke.html 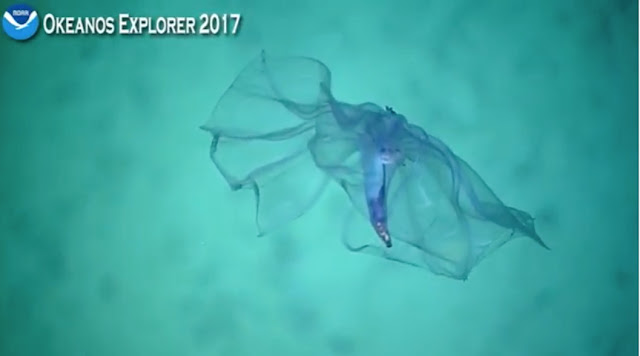 Here are the feeding arms extended into the water... 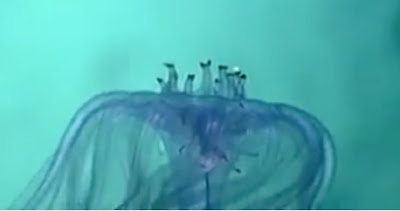 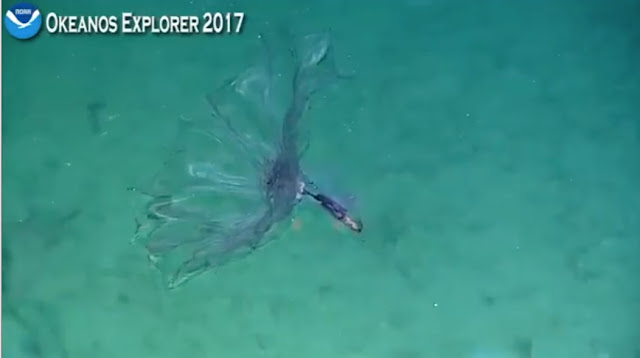 Pelagothuria is contrasted with this other swimming sea cucumber which, after landing on the bottom, poops and then takes off! (from that unnamed seamount off Winslow Reef) 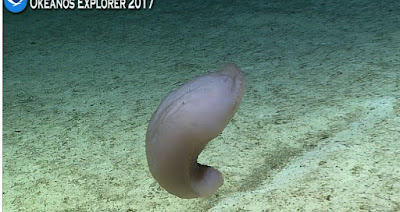 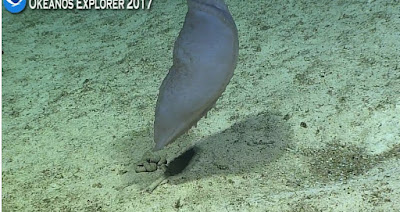 2. The strange irregular urchin Phrissocystis! From Polo Seamount, about 2100 m we saw one of the most seldom seen spatangoid urchins known! These are highly evolutionarily derived sea urchins which live by digging through and swallowing sediment looking for food.

Although they are bristling with spines, they are actually quite delicate. One collected many years ago apparently collapsed as soon as it was brought out of the water in the submersible collection box! 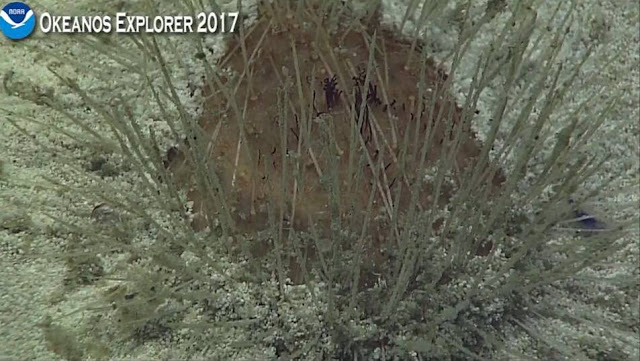 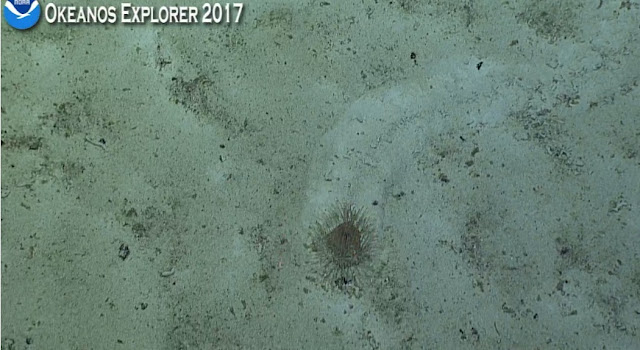 3. A stunning new phyrocrinid stalked crinoid! From an unamed seamount in the Phoenix Island chain, this bold and striking stalked crinoid was observed..and ultimately collected after it was identified as a new species by crinoid scientist Chuck Messing (based on a paper by Tunniclife et al.)

It was quite large with an unusual texture to the stalk and the cup...

Brittle stars, distant cousins of sea stars, are EVERYWHERE in the ocean. And especially in the deep-sea you can see them inhabiting numerous cracks, crevices and living on corals!

Some are VERY spiny.. such as this species, what I think is called Ophioplinthaca. We've been seeing these ever since the first leg of the Samoa Expedition.  They seem to occur on corals with the tissue removed.. possibly by the ophiuroid itself..

Another curiosity is that these seem to "jump" off their perches as soon as the ROV approaches. Whether this is due to light, vibration, the bow wave of the D2 or disturbance in the "ophiuroid force" (NOTE: Ophiuroid force does not exist) is unclear... 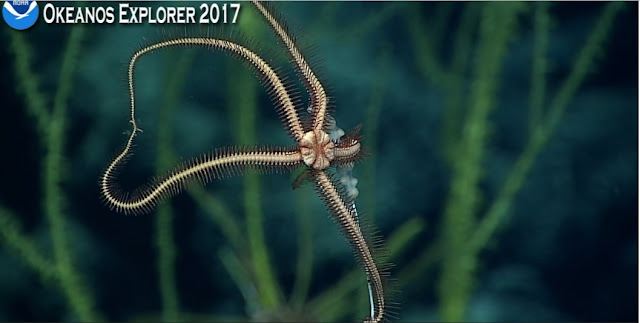 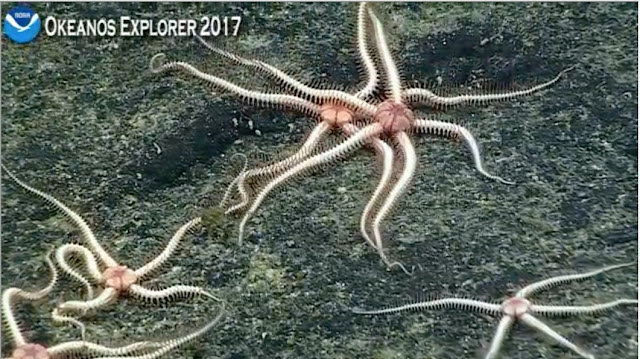 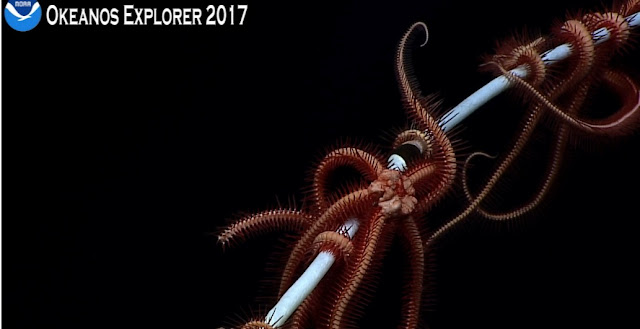 5. The enigmatic sea star Tremaster mirabilis Here's another strange one! A sea star that basically looks like a bowl on the top of a table!

We've seen these before on Atlantic Okeanos dives (see that here) and I wrote about this animal many years ago before people started seeing them alive..

Interestingly, these were found in astonishing abundance on one of the seamount dives 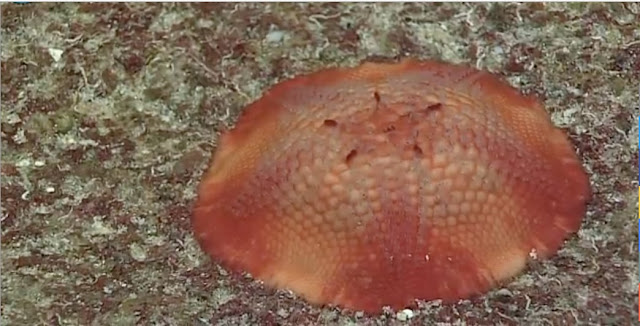 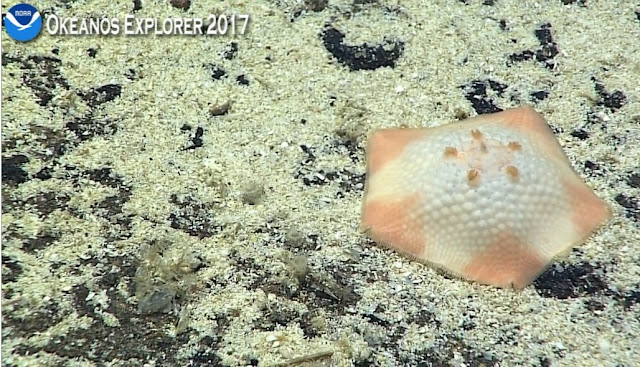 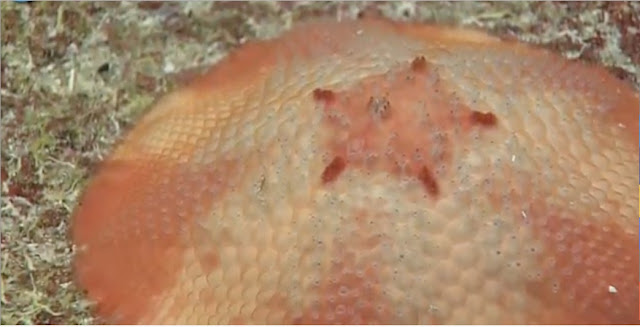 5a. The Deep-Sea Slime Star HYMENASTER
From Titov Seamount was this glorious, glorious deep-sea SLIME STAR, in the genus Hymenaster.

I've written about the shallow water representatives of this genus here. and explored the diversity of Hymenaster in the deep-sea here

*EXTRA! and of course a bunch of weird sea cucumbers!!
A deimatid sea cucumber with many tentacular extensions, this one from Swains Atoll 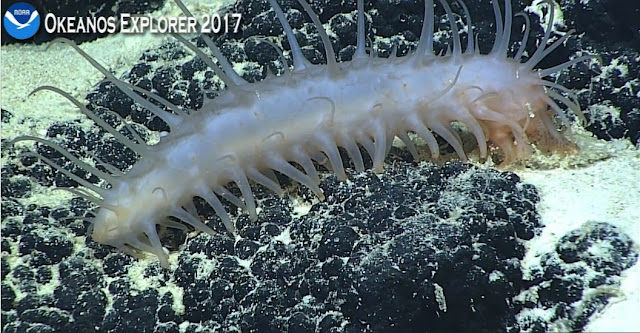 This one has been seen repeatedly rearing back and presenting what I think is its mouth into the water. so maybe feeding?

A red one from Polo Seamount 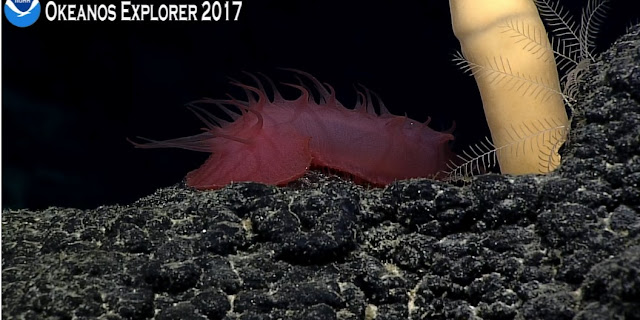 This interesting purple/translucent one from Polo Seamount 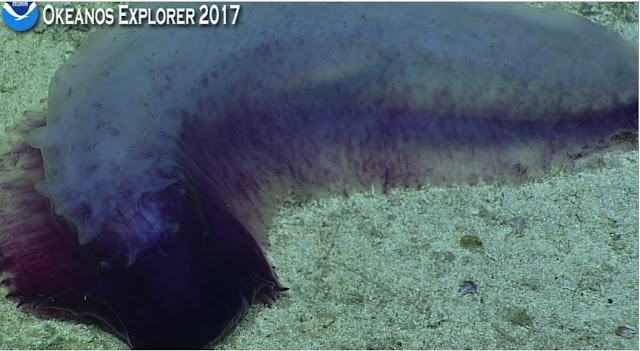 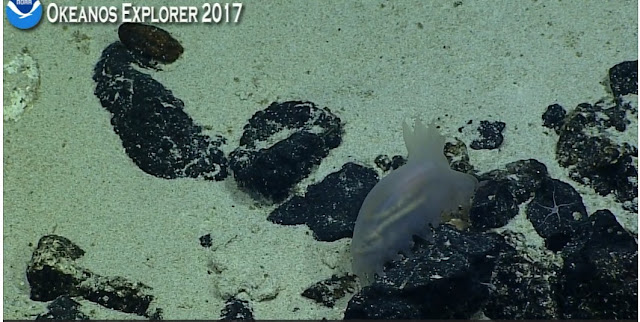 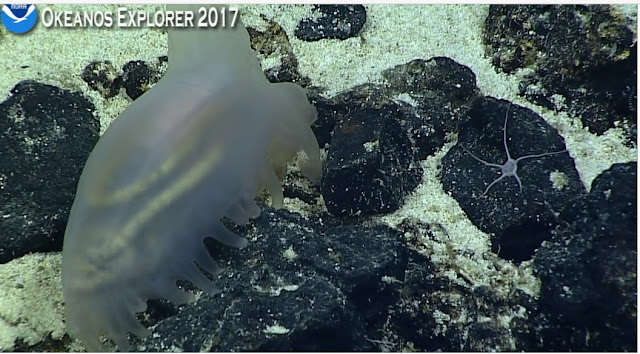 Wonderful recap of some of the most intriguing finds on latest Okeanos dives. Merci!

Amazing stuff,thanks for the postings.