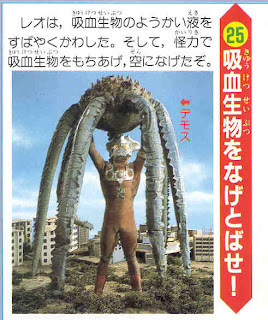 Let's Survey the World's BIGGEST BRITTLE STARS !!!!! The Echinoblog is ALL about enormous ophiuroids this week!

I did one on gigantic starfish a little while back-Click here to go see!!


A family with arms that branch and branch and branch....until they form a huge "basket" with which they use for suspension feeding (see video above). The Gorgonocephalidae is a pretty big family (with some 55+ genera) distributed around the world.

Some basket stars, such as Gorgonocephalus have arms that will reach almost 2 to 3 feet across! Not all of them are this big but a lot of them are pretty sizeable.... 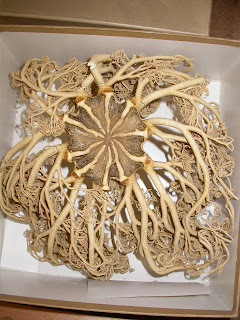 2. Ophiopsammus maculata (New Zealand)
A member of the Ophiodermatidae, which are usually pretty small tropical beasts..but this one gets pretty big!

A disk that is about 2-3 inches across with an impressive arm span of over 6 to 7 inches!!

Its unclear how they feed but some suspect that they do something very similar to this! 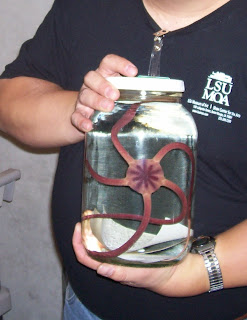 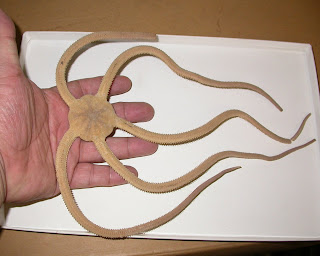 3. Astrostoma agassizi (Antarctic: Southern Ocean)
Okay, so, I'm cheating. Because Astrostoma agasszi IS a member of the Gorgonocephalidae (see above).
I will probably write this up in more detail later but here's some quick details at this site:

Astrotoma is BIG. Disk is easily 2-3 inches across with correspondingly thick arms. 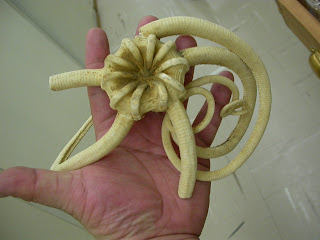 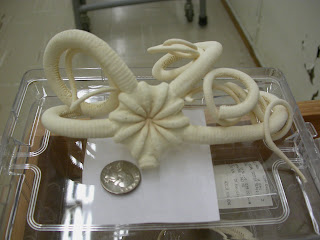 They live in the Southern Ocean/Antarctica in relatively deep-water (about 90-1500m) and feed on crustaceans and other various prey using their very long arms! 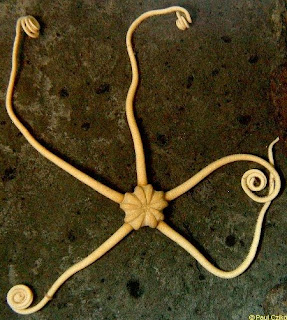 (this image from the Underwater Field Guide to Antarctic Inverts!)

4. Ophiarachna incrassata: Giant Green Fish-eating Brittle Star (tropical Indo-Pacific) I wrote up something about this species awhile back There's a lot of neat things to say about it..but it is BIG. check this video out again!


5. Ophiocoma aethiops (Baja California/Mexico)
All members of the genus Ophiocoma are tropical, shallow-water in all of the world's oceans and all of the species are pretty sizeable. 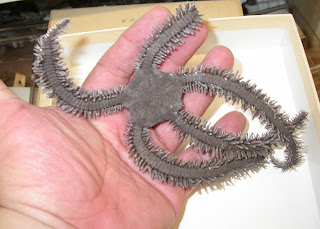 But for some reason, Ophiocoma aethiops from tropical East Pacific is just a bit bigger then the others species of Ophiocoma that one sees in the Indo-Pacific. There's more to this beast..but for now..just appreciate the fact that its a BIG one! 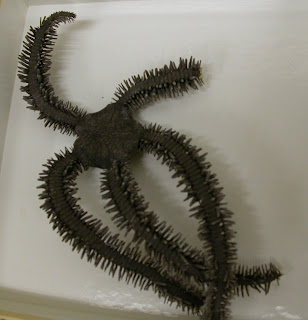 Honorable Mention: Stegophiura ponderosa
So, this is a deep-water species (at least 100-500 m) from off the west coast of North America, Japan, and Russia. 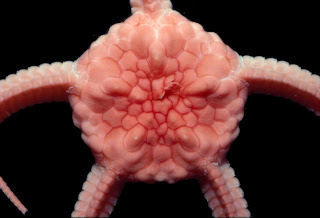 
This animal is pretty big, but doesn't get beyond about 2 inches in diameter?? So how do they qualify?? 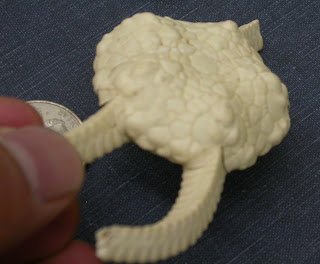 Unfortunately, very little is known about its biology. What does it do with all that heavy body mass?? Arms that don't really move out of one plane?? What do they eat??

How do we know so little about critters that are this frakkin' big????

Has the monophyly of the Gorgonocephalidae been tested? I'm curious to whether the branching arms evolved more than once. It is a large family after all.

I'm pretty sure the branching arm thing has evolved more then once.

There are a handful of ophiuroid phylogenies but I don't believe any of them are deeply sampled enough to show whether the Gorgonocephalidae is truly monophyletic or not.

Ophiuroid phylogeny/systematics is pretty much an open book-but there's this obstacle: someone to ID them for you... Nobody really does both.

Some Indo-Pacific reef field guides list the basket star Astroboa nuda for being notably 1 meter across in diameter. Is that true?

Tentaculus,
I think that is overall armspan (tip to tip) but yes. About a meter in diameter sounds right for some of those taxa.

Sigh...I do miss it, really I do... I enjoy the paycheck and all. But my heart is still with ophiuroids. Thanks for the fantastic reminder of just why that is the case :)

Hi, I am from Rebecca Johnson's Biology 555 marine invert zoology class. Wonderful post showing the varying sizes of these beautiful critters. I was curious as to how quickly the basket stars grow? Also, what material comprises their tentacles?

OH, and also, are these basket stars able to control every since one of their tentacles? What preys on them? (they're quite large!)