Raiders of the Lost "Ark"arua? The oldest Echinoderm?? 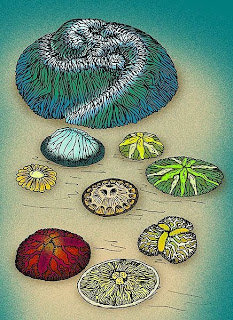 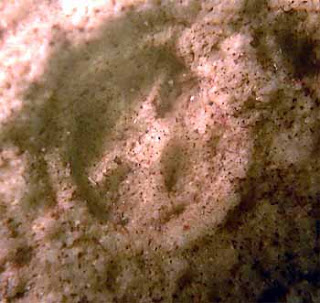 (from the UCMP Berkeley website)
Details for this are from this paper by J.G. Gehling. In 1987, a new fossil, called Arkarua adami, was described from the famous Precambrian Ediacara beds in the Flinders Range of South Australia (about 635-542 millions of years ago).

The absolute age here is important. This fossil is PRECAMBRIAN. Geologically, that's right at the edge of what we think are animals in the fossil record!!

Between the absolute geologic age and the fact that these are potentially early animals-its often difficult to "make the call" as to the importance of these fossils relative to more modern forms.

This beast has a GREAT name!! The genus is named for Arkaru, the name given to a large mythical snake by the Adnajamathana Aboriginal people of the central Flinders Rangers. (with species named for his eldest son). To quote from the paper:


Two of these legendary serpents are credited with the formation of what is locally the most prominent landform: Wilpena Pound, a synform after which the Pound Subgroup was named.

What makes it an echinoderm?

(from the UCMP Berkeley website)
It apparently has pentagonal symmetry (which one finds in echinoderms) with what seem to be ambulacral grooves (where the tube feet emerge) and a distinct marginal rim similar to those in Paleozoic echinoderms called the edrioasteroids. With mouth facing down. They're small. (Only about 3-10 mm in diameter).

Unfortunately, the usual dead give-away characteristic, the calcium carbonate plate skeleton was not identified on the fossil...

Here, we have a reconstruction from Gehling's (1987) paper. 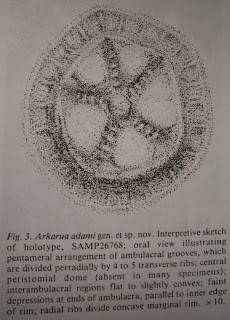 Gehling collected some of these fossils from sediments that showed micro-current scour shadows where flow turbulence eroded a down-current crater. 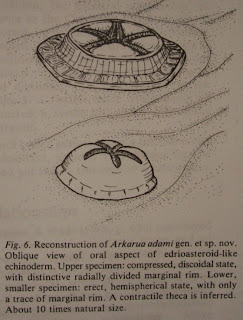 There were apparently two forms that he collected. One that was flattened with a disk-like strongly expressed marginal rim (top) and another that is more convex and looks sort of like a big delicious piroshki (a tasty meat-filled Russian pastry)!! 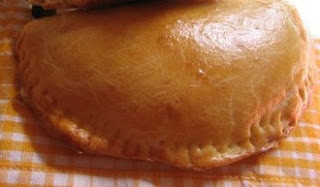 Those are Echinoderms? REALLY? What are they related to?
These look like other Precambrian discoid forms like Tribrachidium, shown here:

(from the UCMP Berkeley website)
And in the grand Echinodermata viewpoint, they go right down at the bottom..especially relative to the more familiar Paleozoic Edrioasteroidea...(see the bottom in red) 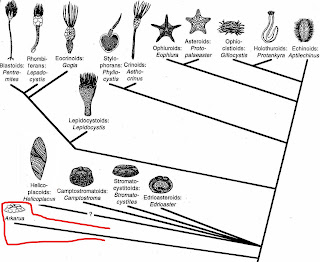 REALLY?
BUT not everyone thinks that these fossils are echinoderms. Arkarua is more easily justified as an echinoderm because its pentagonal but this and the related forms have been interpreted as MANY other kinds of animals: sponges, cnidarians, lophophorates and etc..

If its 5-part symmetry makes it an echinoderm, then wouldn't it be up there where that synapomorphy evolved? If so, then stereom should have evolved prior to Arkarua. But, there is no stereom anywhere (so far found) in Precambrian rocks.

I would conclude that Arkarua cannot readily be interpreted as an echinoderm.

Second line of evidence: If Arkarua is an echinoderm, then Bilateria is older than Ediacaran. Early bilaterians were worms. Worms make tracks. No tracks or trails prior to the Ediacaran. Thus, Arkarua probably isn't an echinoderm.

For what they are worth, my 2 cents.

Well,
I think that the problem with these very old fossils IS the interpretations of the fossils. Some might argue that the marginal rim IS stereom or stereom-like. I believe Gehling interpreted several of the features as consistent with echinoderm characteristics.

The difficulty of your position is the argument of non-presence. The absence of presence is not presence of absence.

No worm tracks? Not evidence that they weren't there-only that you don't see them in the fossil record.

I honestly have no position on this fossil one way or another-and your arguments are ones I might use if I were attempting to argue against Arkarua as an echinoderm. They are good ones. I'm just playing devil's advocate. :-)

In my professional opinion, it looks like a smiley face, therefore bi-symmetrical.