Last week I wrote up a general overview of evisceration (and regeneration).

Evisceration is a general term that describes the expulsion of how SOME sea cucumber's "viscera"-intestines, respiratory structures, gonads, etc. (varies with time of year and presumably the species) is EXPELLED through the body wall. Here's a nice video that shows what that looks like..

But if we get away from the general phenomena of evisceration-we can focus on the defensive ecology!! Specifically in tropical sea cucumbers in the Aspidochirotida (and I believe only in the Holothuriidae) which have special organs ONLY for eviscerating! 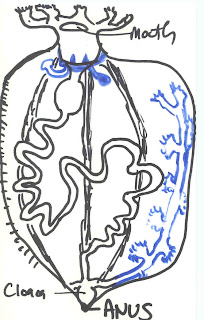 Cuvierian tubules are branching structures that occur on the respiratory tree (seen above in blue) of sea cucumbers. (this drawing from the University of Michigan Animal Diversity Web)

They branch off the respiratory tree and are expelled through the body wall at oncoming predators, such as fish, crabs, or predatory echinoderms, such as sea stars. But how effective are they? How do they work? How do these affect the sea cucumber's day to day ecology?

Ecology and Defense
Much of the information used in this section is taken from an excellent paper by Jean-Francois Hamel and Annie Mercier in Marine & Freshwater Behaviour & Physiology 33: 115-139 and this: physiology and regeneration oriented papers by Didier Vandenspiegel, Michel Jangoux and Patrick Flammang in Biological Bulletin (2000). and this: Patrick Flammang, Jerome Ribesse and Michel Jangoux in Integrative and Comparative Biology 42: 1107-1115.
Hamel and Mercier studied the efficiency of Cuvierian tubules in 3 species of tropical sea cucumbers (note that idents were taken on face value from labels-but used for educational purposes) Some ecological dynamics...
Flammang and his associates found that tubule "tenacity" or the adhesive strength varied with the surface it was in contact with, temperature and salinity of sea water and the time following expulsion from the body.


Regeneration of Cuvierian Tubules
There's a whole blog that is to be written about all of the various dynamics involved in sea cucumber regeneration.

But what it comes down to is that there are many cells which are "undifferentiated" that is-their use in tissue has not yet been determined by the body's needs.

These "proliferate" or become more numerous and as regeneration begins, these undifferentiated cells decreases and the "specialization" or "differentiation" of cells begins to replace the lost tissues (i.e., the Cuverian Tubules).

Vandenspiegel, Jangoux and Flammang summarized the strategy for Cuverian Tubule defense and regeneration very eloquently and so I repeat it here:


Holothuroid Cuvierian tubules thus constitute a very efficient defensive mechanism. Indeed, in addition to their remarkable structural organization, which accounts for their adhesive and mechanical properties, their large number, sparing use, and particular regeneration dynamics also make them an almost inexhaustible line of defense maintained at limited energy cost.

Very interesting, thanks for the info!

THANKS!! XKCD AND ALCOHOL LED ME HERE!

cool! was I mentioned on XKCD? which one?

Help! Do the tubules get from the coelom cavity into the digestive tract so they can be expelled

... expelled? How do they cross the intestinal wall or whatever? Help!

Reading between the lines, does the spike of intracoelomic pressure actually rupture the wall of the intestine near the anus, and the tubules are blown out through there?

The anatomy of how they manage and repair deliberate colon ruptures seems like there's a PhD in it. I wonder if they have a deliberate weak spot or something like a Ziploc portal.