The Natural History Museum: An Overview 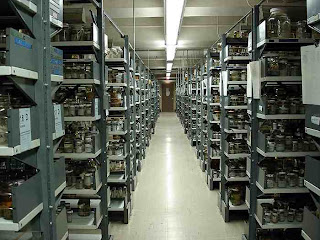 Today, I thought it would be interesting to talk about how natural history museums and natural history collections are important to biology, and to the "big picture" in general..

A lot of people who are reading this are probably already quite familiar with all of this-but I discover in one way or another that every day is filled with an educated person who knows NOTHING about what I or so many others do at work.

What is a natural history collection?? 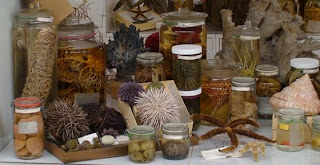 A natural history collection is a massive storage "warehouse" of sorts, that includes almost exclusively natural history type specimens. Historically, they have included minerals, gems, anthropological artifacts, shells, insects, plants, pelts of mammals, birds, and preserved specimens of a myriad of other animals.

The amassed aggregations of these artifacts led to people who began to study and describe them. Often for the first time. It is for this reason that a great deal of taxonomy and systematics is done at museums.

It is important to note that the collection data (i.e., where it was collected, when, by who) is crucial towards the value of these artifacts. Without them..all you have, at best, is a pretty display specimen.

When new species are described there are rules in the International Commissions for Zoological and Botanical Nomenclature which mandate that some kind of voucher specimen must be deposited for long-term storage. Specimens can be dried, preserved in some sort of fluid (ethanol, formalin, etc.) or sometimes even as a slide or a video (although this is not very common). 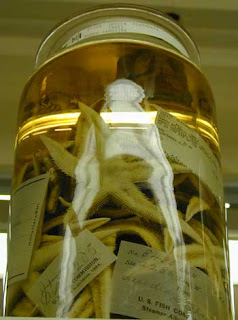 This is done for many pragmatic reasons, the least of which, is so that someone else can clearly see the concept for that animal on an actual specimen. In other words...what does "big spine" or "cruciform lip" mean???

There might be a picture..but ultimately seeing the original specimen..known as the "type series" and other subsequent representatives give future generations a tangible idea (and sometimes even the intentions) of the original author.

Where do natural history collections come from?? 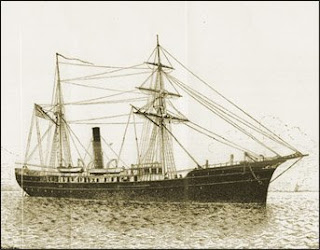 A lot of natural history museums have their roots in either a federal, state, or some local government natural resources survey (or surveys) or sometimes the massive collection of a private collector.

Pictured above is the the United States Fisheries Commission vessel Albatross which was reputedly one of the first vessels ever built for marine research. USFC Albatross surveyed throughout the Atlantic and the Pacific, ranging from the Caribbean to Alaska, Hawaii and Japan.

During the tour of the Albatross, she collected thousands of specimens of animals, plants, and etc. from around the world. These were part of the first natural resource and biodiversity assessment performed for the United States.

Can you imagine a Washington or California coast where we didn't know ANYTHING about the animals that live there? (note that there are now about 2 dozen field guides for this area alone!

They did.
Specimens from the Albatross were among the first to collect and return those specimens to the scientists of the day for description and our understanding.

Today, modern biodiversity expeditions and similar natural resource studies continue to provide the main fodder for museum collections. Everything from SCUBA trips to fisheries studies to submersible dives amass materials which are studied and eventually deposited in a natural history museum.

How do you tell what specimens were used for an environmental assessment?
Go check out the museum vouchers.

How can you be sure that all of the specimen identifications for that phylogeny of the Fang-toothed Astropectinidae were correctly identified?

Go check out the museum vouchers.

Where do you go to make sure that you identified all of the rare cookie-monster jaws from your recent expedition to the Mongolian mountains?

Go check out the museum specimens. (or the types in this case...)
What are the dynamics at a Natural History Museum?? 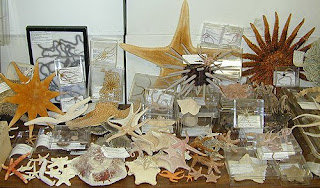 The modern natural history museum acts as a library/storage vault of valuable biological vouchers. There's a couple of things that makes places like this pretty cool:

* Specimen treasure awaits!!
Generally speaking most scientific expeditions bring back hundreds to thousands of specimens with MANY different taxa. Often, the initial exploratory "cut" of an expedition may not identify or sort all of the specimens collected. Because of this, specimens, often rare or even NEW SPECIES will often sit for decades before someone identifies it. That someone could be YOU.

*Historical Wonder.Most natural history museums contains specimens anywhere from hundreds to MILLIONS of specimens, sometimes collected over the course of hundreds of years. Specimens at the Museum nationale d'Historie naturalle in Paris, France for example, have specimens studied by Lamarck, d'Orbigny from the 19th century and thereabouts.

Between specimens I've seen at the California Academy of Sciences, the Smithsonian, and the MNHN in Paris..I've held specimen tags written by Ed Ricketts, Lamarck, Darwin, d'Orbigny Walter K. Fisher, Austin H. Clark, the crown prince of Japan, and any number of other prominent biological luminaries.

*Museum people+environments=funky, cool science place.These specimens attract museum-oriented research visitors, making museums a great networking source. You can practically have mini-scientific conferences during a good visit. At the right time, at the right museum I've been around when 3 or 4 of the world's experts have just been coming through town and stopped into say hello.

Like universities, natural history museums are academic environments but with the added dynamic of the exhibitry, adult education classes, school group tours, etc, etc. There isn't as regular an input of students, but you get many different types of people in and around the facility.

Often times, museums are places where cutting edge innovation (e.g., DNA barcode extraction) meets classical 19th century conceptuals (e.g., taxonomic codes). You may or may not get critical mass..but you can get a lot of smart, creative, and unusual individuals around in a unique setting.

How do they keep track of all those specimens and how is that important? 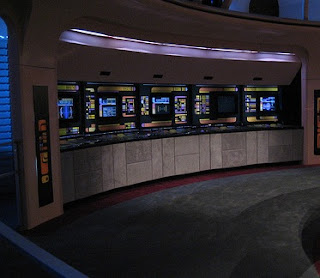 (this is not an actual museum database)

With computers and electronic databases!!

So, of course, one needs to be able to keep track and retrieve a needle in a haystack (so to speak). Museums can have millions of specimens and they would be lost without some way of retrieving them.
But this has been taken one step further and the data from these databases has found use for all sorts of things!  Museums have been around for a long time and often think about recording long-term changes.

They can record changes of baseline faunas over hundreds of years. What did San Francisco Bay look like when the Albatross first surveyed versus what it looks like now? All interesting challenges for these database assessments.

Even an assessment of an expedition of specimens from a particular place can be compared over time to assess how many species live there and where. And where they are no longer...

Some of the original specimens even contain enough DNA for studies of animal specimens that are 10s to 100s of years old!! 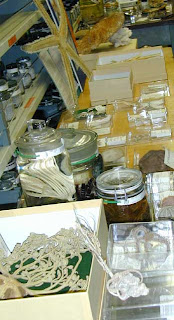 Nice post, but in honor of LOL OSHUNZ week.

good to hear from you freaks - you are doing a interesting job for sure.