CRINOIDS!  These are considered the oldest of all the living echinoderm groups. Fossils of crinoids are commonplace in the Paleozoic (see examples here).

Most modern crinoids go by the name "feather stars" (for example here) because their adult forms no longer retain the long stalk present in these older forms. This heritage, however, IS retained in feather stars, which have a stalk when they are juveniles (see this post).

Crinoid feeding biology is fundamentally a simple matter. Arms are outstretched into the water current and food is caught by the branching on the arms and moved to the mouth present in the cup (also called the calyx which is a damn good Scrabble word).

Of the approximately 600 species of crinoids alive today, about 95 of them are stalked but belong to a diversity of different genera, family and species. Nearly all of these live in the deep-sea where they occur at great depth, ranging down to the deepest known depths (9000 meters!)

NEW species of stalked crinoids continue to be discovered!! Such as this Antarctic species described by my French colleagues at the Museum national d'Histoire naturelle in Paris.

One of the primary differences in overall morphology is how and whether they are attached.. As you can see, the yellow Hyocrinus  (family Hyocrinidae) on the left side is permanently anchored to the rock, whereas the Endoxocrinus (Isocrinidae) on the right side has a stalk that ends as kind of a tail, which allows it to crawl around and move. (presumably to escape predators as outlined here). 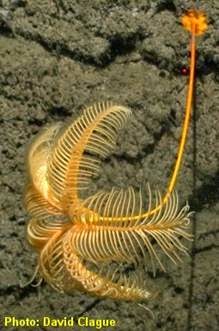 Today, I just thought it would be cool to share the diversity of stalked crinoids that are around TODAY.   Life modes of fossil species can be pretty amazing as outlined here.

We start with an unusual stalked crinoid.. Neogymnocrinus richeri in the Sclerocrinidae...

These have a short stalk with these thick, unusual arms and a palm-like cup. Its possible these feed a little more aggressively than their other filter-feeding cousins... 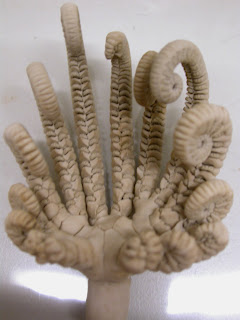 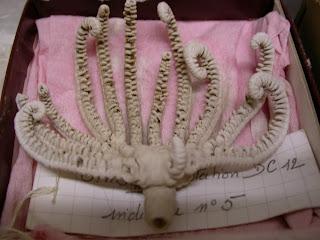 Endoxocrinus? (I think) from the tropical Atlantic


An interesting stalked crinoid I don't recognize with distinct segments on the stalk..  from Indonesia)

Another interesting one with only 5 arms..(from Vailu'lu Seamount in the central tropical Pacific). Dr. Marc Eleaume at the Paris museum thinks this might be Guillecrinus neocaledonicus

The distinct yellow stalked crinoid Hyocrinus  from the North Pacific


A red stalked crinoid species from Indonesia. Probably Proisocrinus ruberrimus according to Marc Eleaume at the Paris museum.


Another interesting red stalked crinoid from Indonesia. Note the weird fuzz on the stalk? Possibly hydroids or some other kind of animal....

Some of you may remember that we saw a stalked crinoid in the North Atlantic via the Okeanos dive last year which ALSO had these interesting growths on the stalk... 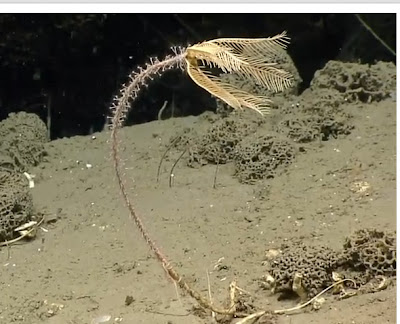 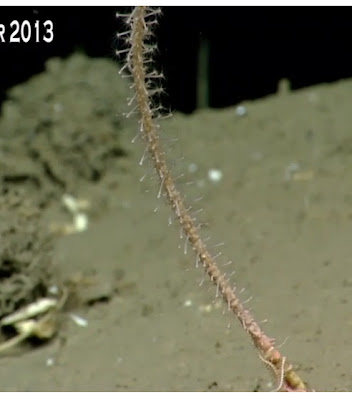 Here's one of the deepest occurring kinds of stalked crinoids, a bathycrinid which seems to be anchored in sediment..
Like their shallow water counterparts, its not unusual to find several stalked crinoids in the same place, taking advantage of a good water current for feeding... which makes for an almost surreal deep-sea bottom...

The red stalked crinoid species from Indonesia is probably Proisocrinus ruberrimus. It is closely related to Pentacrinitidae (the ones with the cirri on the stalk) and has lost most of its stalk appendadges, except on the proximal part of the stalk, just under the calyx.

Hmm... that red is an interesting one!