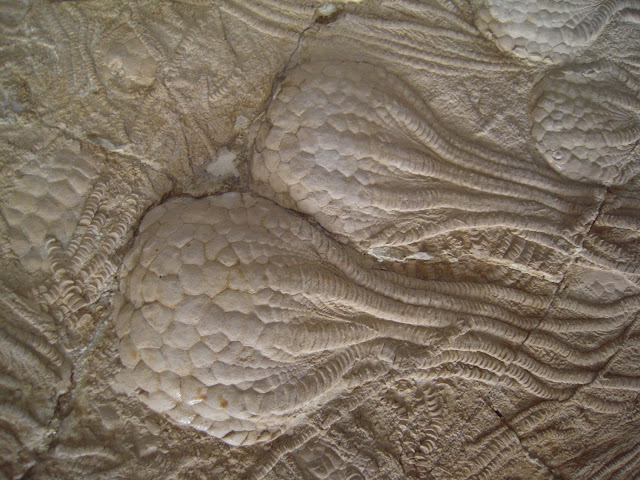 This week I thought it would be fun to revisit the wonderful world of stalked crinoids!  I've previously looked at photo galleries of deep-sea living stalked crinoids here and a few from the Hawaiian Okeanos expedition. 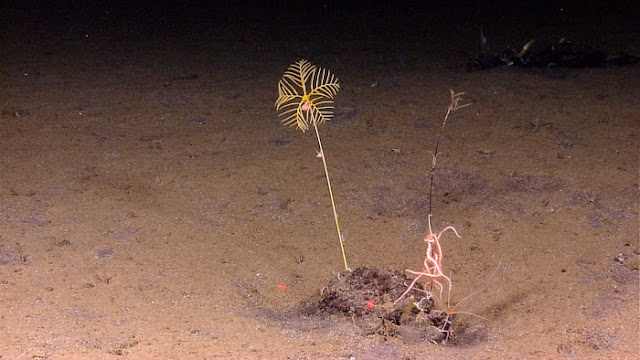 For those who might not be familiar with stalked crinoids, they are the ancient ancestors of modern day feather stars (aka comatulid crinoids). 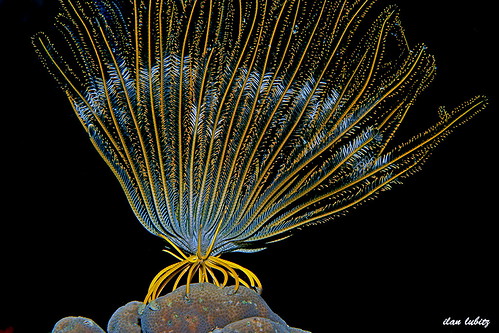 Stalked crinoids are fundamentally composed of three main regions: the calyx (or cup), arms and stalk which is very nicely illustrated by this diagram from the Field Museum in Chicago!

Stalked crinoids feed on food particles in the water column using their arms which they move down to the mouth located at the top of the calyx (or cup). The stalked and unstalked forms have an unusual relationship which you can read about in an earlier post here. 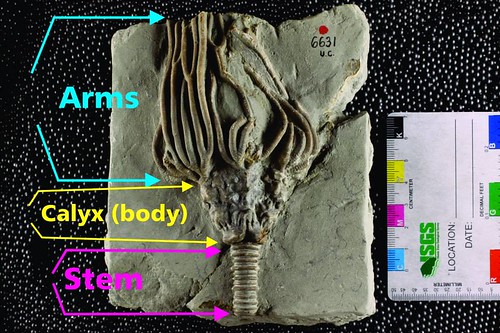 Let's start off with this gorgeous one called Acanthocrinus rex! from the lower Devonian of Germany. This image was reported by crinoid scientist Hans Hess as "certainly one of the most beautiful crinoids ever found.." Sadly, this specimen was lost in World War II.
The images below are a nice set of Paleozoic crinoids by James St. John on Flickr.. 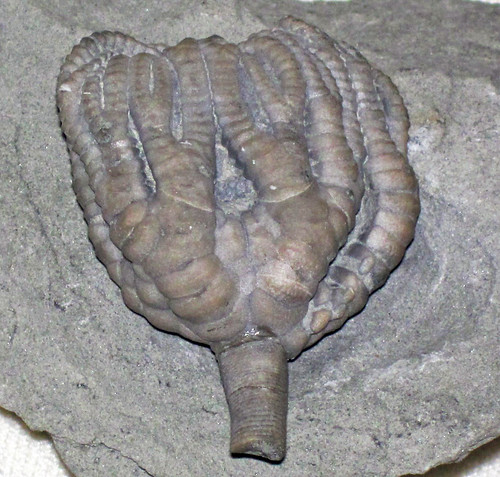 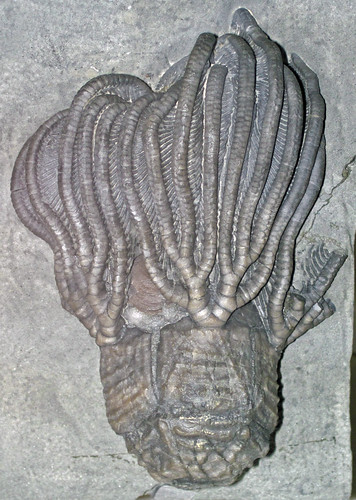 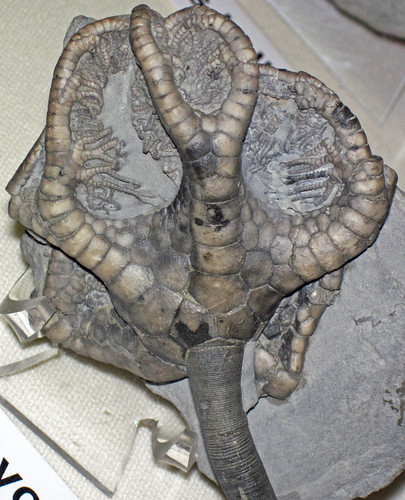 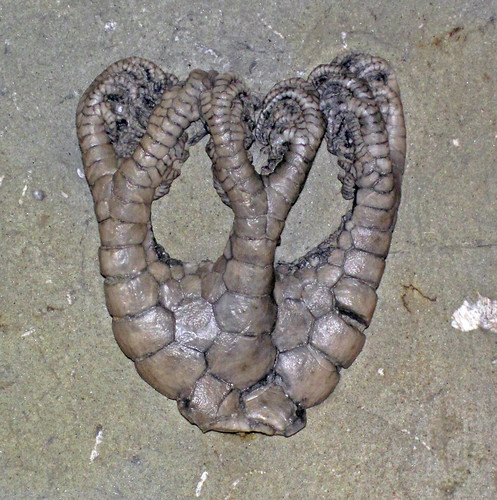 David Clark on Twitter brings us this interesting one with large spines emerging from the calyx! The aptly named Acanthocrinus! (from the Devonian of New York)

This next series is from Elrina753 (thanks for the awesome images!) from the Houston Museum of Natural Science. These look like the Mississippian, Platycrinites 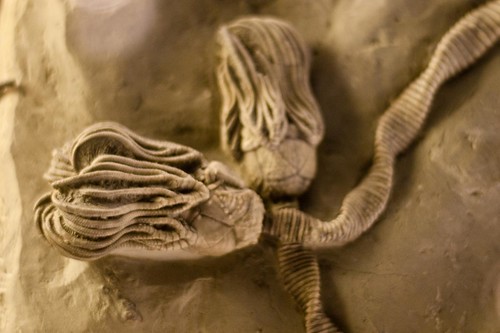 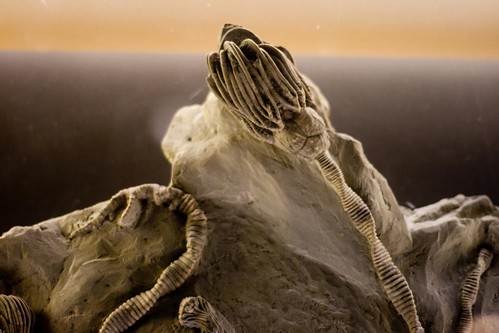 Another gorgeous one from the Houston Museum of Natural Science: Onychocrinus exsculptus 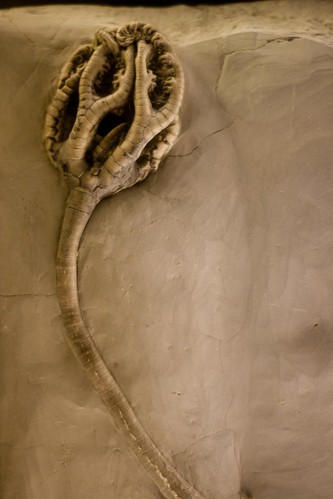 And this third one from Houston which I don't have a name for... 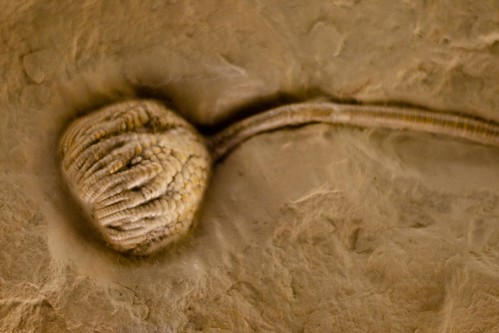 An interesting Paleozoic one called Eretmocrinus (no other info, so unsure if ID is correct) but the arms have very unusual morphology. Notice how they become paddle like towards the tips! 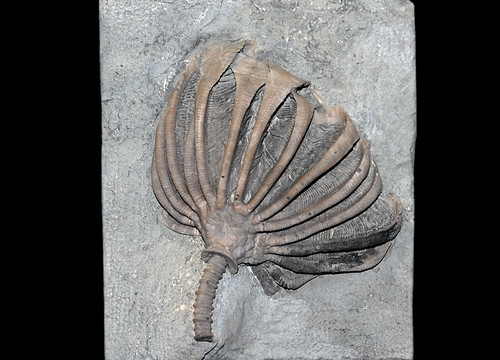 And from the displays/collections in Washington DC at the NMNH.. the massive Jurassic Seirocrinus which was actually thought to be pelagic and might have attached to floating logs! More on these two unusual swimming/floating crinoids here. 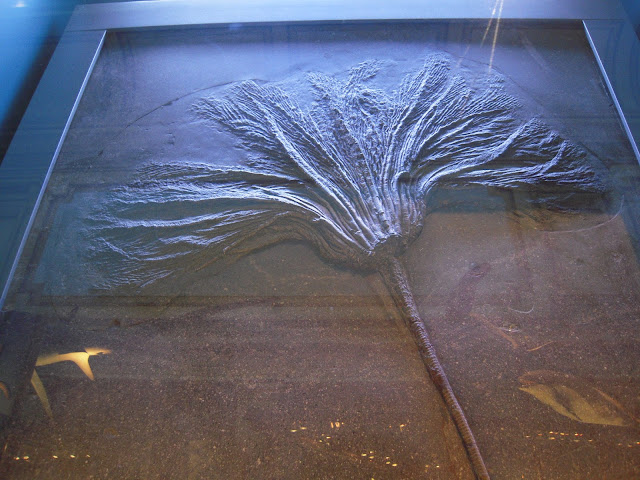 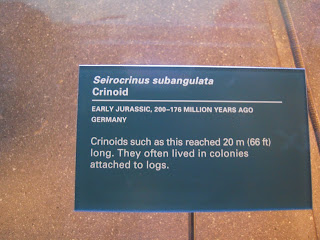 The bizarre Uintacrinus which some thought might have actually dragged its arms over the bottom as as it floated by...

Are there any extant shallow-water stalked crinoids? I am now a PhD student in marine ecology but years before I went back to school I saw something in the intertidal in New Zealand that looked distinctly like fossil sea lilies.

Those are beautiful. I'd love a 3D print of those Onychocrini, if somebody would kindly do a good scan.

The polygonal tiling structure, does that correspond to anatomy of modern species?

To mechanical lye hammer: There are not any shallow-water stalked crinoids exactly..but some shallow water feather stars go through a stage where they appear like very small stalked crinoids. I'm unsure of what you saw in the New Zealand intertidal but many filter feeding animals display a parallel or convergent appearance.

To Eli: Living stalked crinoids have cups or calyxes but they are very different from the ones observed in Paleozoic species.

Luckily there is a cast of that Acanthocrinus rex specimen at the Natural History Museum in London! Not as good as the original of course, but better than nothing. It's slightly ironic, because I suspect it was a British bomb that destroyed the original.