Another Giant Monster Starfish from Japan!! 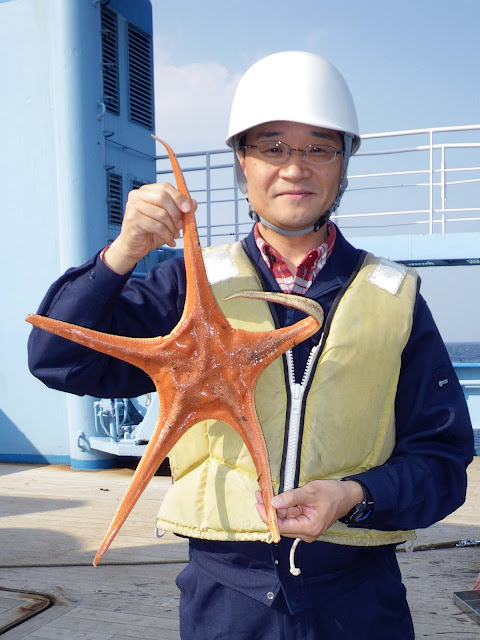 "Giant sea star with an endangered sea-star taxonomist in Japan"

My colleague, Yoichi Kogure at the Japan Sea National Fisheries Research Institue in Niigata Japan just sent me this GREAT pic of him with what is probably the largest starfish in Japan! (and probably a contender for one of the largest in the world).

The latin name is Mariaster giganteus described by the famous Japanese starfish taxonomist Seitaru Goto in 1914 and seen only rarely since then!

M. giganteus lives in relatively deep-water from the upper continental slopes around Southern Japan. It is a rarely collected species. There have only been maybe two specimens, reported from Japan and I've only seen one specimen from outside Japan.

He has provided a caption for the picture which alludes to the ongoing rarity of sea star taxonomists both in Japan and around the world..

Yoichi proposes a Japanese name for this species:

Thanks again to Yoichi! A great weekend to everyone!
Posted by ChrisM at 7:14 AM

The claim of "largest starfish in the world" would need to be amended with a note, "five arms" to be true. I've seen some pretty hefty sun stars in my time.

This only shows big starfish from Japan. Here is a survey of the world's largest...