yeah, I said I was off this week..but I couldn't resist these.. Go check out the arranged diatom photo set at the California Academy of Sciences Flickr. here.

Happy Holidays! Who loves a Christmas tree decoration? And has broken one in their lifetime?

Well, in the real world, we get to see LIVING glass (or sometimes chalk) boxes that might pass for ornaments! But you need to shoot electrons at them to get something like a similar effect! Scanning Electron Microscopes are the gift that keeps on giving!


Here is a diatom called (appropriately) Skeletonema. This one occurs in Florida waters..Image by FWC-Fish & Wildlife Research Institute

The following are SEM images of foraminifera (shelled amoebas) taken by the National Museum of Wales..
You know what people like?  COCCOLITHOPHORES!!  These are algae which have calcium carbonate (i.e. chalk) skeletons which under the surreal view of an SEM appear like this...

Cretaceous coccolithophores!
Here's a nice conglomerate of Umbilicosphaera sibogae from the folks at Zeiss microscopy!

Happy Holidays! Echinoblog is off next week !
(thanks to Chris Taylor and Rhi L. for corrections!)
Posted by ChrisM at 7:53 PM 1 comment:

SAND ANGELS! Astropecten The starfish that dig it!

So, y'a know how people do this snow thing? SNOW ANGELS?  Drop yourself in some powder and go wild! 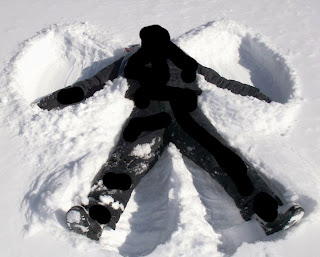 Well, la-dee-da! Starfish can do that TOO! Except, not in snow. not in the winter. Not on land.  In sand. in mostly tropical shallow to temperate waters. So there.

I am referring to the widely known "sand star" called Astropecten, which includes over 100 species present all over the world, in tropical to temperate waters.   Go here to see some awesome pics of Japanese Astropecten and related spp. Most occur in shallows but some live in deeper-waters.
Astropecten is often confused with Archaster typicus aka the "fake Astropecten" aka the "typical star" aka the "other sand star." Go here to see the difference. But one important difference? you will NEVER catch Astropecten pseudocopulating! Bfah!

Which famous Simpsons gif meme does Astropecten remind you of?

This one is probably one of the best videos of Astropecten burying and reburying itself. A video from the Enoshima aquarium of A. polyacanthus.

Although they dig, they are not, strictly speaking, infaunal. They live buried right under the surface of the sand...
Where, they are often digging through the sediment trying to find goodies to eat, such as this clam. But really whatever they find, they will swallow and devour. Note that Astropecten and its relatives LACK an eversible stomach (that you might see in other starfish). So they literally can ONLY swallow their prey..   This image is fr. A. aurantiacus in the N. Atlantic somewhere..

As I mentioned, Astropecten occurs widely around the world. And is quite diverse.  Here is Astropecten articulatus from Georgia (south coast of the US)

Where do those starfishes & Sand dollars on Holiday decorations come from?

December Greetings! As we get into the holiday and Christmas season, I always get certain questions which pop up around this time of year, asked by the public. One of the common ones I receive around now is (paraphrased)
"Where do those starfish and sand dollars on holiday decorations come from?" Usually followed by "Are they alive?" and etc...

So, let me take a trek through several recurring photos of holiday decorations and show you species by species how they compare.

I have written before on where these decorations come from. A prior overview on starfish here.  A prior account on sea urchins (and sand dollars) here.

A general rule about echinoderms used in decorations: WHAT YOU SEE ARE NOT SHELLS, THEY ARE MUMMIES (dried endoskeletons).
A bit of a refresher on basic echinoderm anatomy. All of the distinctive features one sees in echinoderms- spines, tubercles, the various shapes and etc. are covered by epidermis, in other words, SKIN.

So, yes, in order to get one of the starfish dried and made into a wreath? It has to be killed. (that's one of the questions I get about these by the way...)

So unlike say, shells which are secreted outside or independently of the animal's body, echinoderms have an internal support that is analogous to the skeleton in vertebrates. Their tissue is actually infused into this skeleton.

I've said this before many times. Here and here.  I've always found the whole concept of putting echinoderms onto holiday decor as kind of macabre unless you're that guy who puts dead, dried frogs on your Christmas tree, which is perfectly fine.... 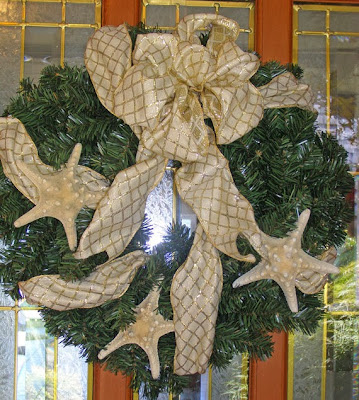 These are Protoreaster nodosus, a species which occurs in the Philippines, Singapore, and all throughout the North-Central tropical Pacific.

Protoreaster nodosus is an abundant and easily encountered species where it occurs. It is harvested in several places for tourist and gift making decor. A whole industry is oriented around fixing (ie treating with formalin), drying and exporting dried starfishes. I've briefly discussed this here and here

So, there is a fishery of this species, even if people don't eat them. There has been some ongoing work to determine if the species is sustainable (such as this paper by Bos et al.2008).  I'm not sure the results are encouraging.

2. Pisaster ochraceus & the "Coastal Wreath"(thanks to Gail for the tip!)
Thanks to the wonders of the Internet and directed marketing, I clicked on the link to this item ONCE. And it now shows  up on ALL of my social media and other shopping pages... 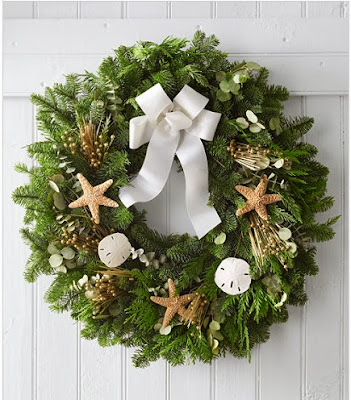 The picture actually shows up on several different gift and other sites, which I'll decline to name. But two species are observered here. the starfish is Pisaster ochraceus aka the Ochre Star from the Pacific NW coast and the sand dollar Mellita (prob. Mellita quinquiesperforata ).

Its not unusual for Pisaster to turn up dressed up as any number of awful, tacky holiday decorations 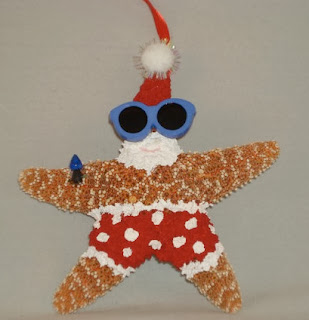 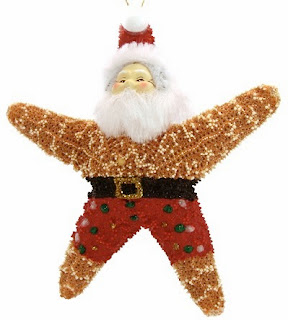 Here again, is a pic of the animal alive to remind you of the contrast...
So, the ochre star, the ecologically important keystone predator, which feeds on mussels and so forth. This species, among several others, is currently under attack from starfish wasting disease
So, perhaps it is NOT the best species to be turning into garish Christmas and holiday ornaments, eh?? 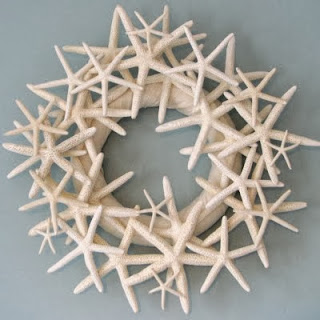 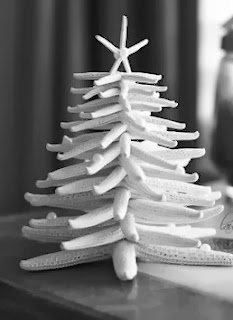 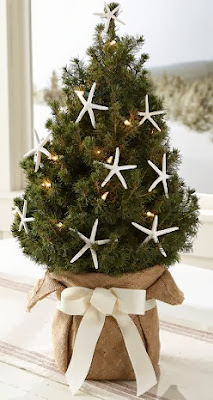 Linckia laevigata aka the "Blue Linckia"(although it does occur in other colors) is one of the most heavily fished sea star species in the tropical Indo-Pacific.


I wrote up a bit more on this species here.

This species is "fished" for both holiday trinkets AND the aquarium trade and is probably NOT a good sustainable species for those industries...

3. Archaster typicus
This treats the two specimens at the top of the "wreath".. these are another species which is widely occuring the tropical Pacific. 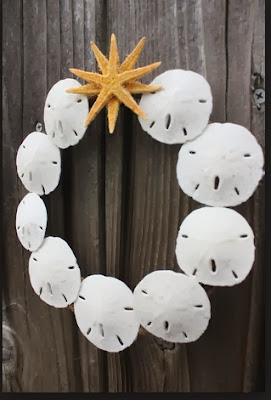 Mellita spp. are from the tropical Atlantic coast, the Gulf of Mexico, Florida, etc. in shallow water.
Sand dollars are sea urchins! And here's more on that.   Those holes in the body (ie. the skeleton also known as the test) are called lunules  and they are pretty nifty.

Another commonly encountered species in holiday decorations. Sand dollars, especially these species have the most "benefit of the doubt" because its not unusual to encounter their dead skeletons as beach wash.

Although one has to wonder how much collecting one needs to have enough to create a regularly marketable wreath such as the ones I've been seeing marketed on the Internet...

I'm pretty damn amazed at just how WIDESPREAD these get via the tourist industry. I've literally seen these sand dollars shipped across the country and across the WORLD for sale at tourist shops.

Here is what they look like with all the original spination and such...

and we even got video! 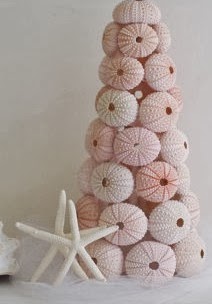 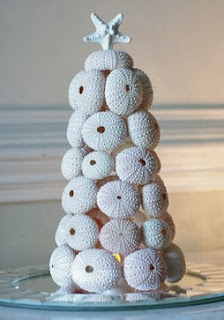 Maybe Echinometra from Australia?  Not sure. Like sea urchins, the tests can be gotten as beachwash.. but not regularly. So, I'm thinking these were likely harvested...


The websites for "urchin trees" and such were running these items for anywhere between 70 to 150.00.  But cripes! 150 dollars for sea urchin tree???

So to recap:
1. Starfish decorations are mummified remains of living animals, which had to be killed in order to get you a holiday wreath. I wouldn't lick them.
2. Many of the species used in these industries from the tropical Pacific are probably not sustainable fisheries.
3. Personally, I just think decorating starfishes like Santa Claus is tacky. So, please. just stop. Use sea shells or give people candy. People like candy.
4. Sand dollars are okay. Still possible to kill them for use as decorations. But also possible that they were collected beachwash.
5. Good grief. Who pays 150 dollars for holiday decorations made from beachwash??? or mummified starfish remains??? You know what's good for 150 dollars? chocolate.Send to the Echinoblog. Or charity. charity is good.
Posted by ChrisM at 6:38 AM 5 comments: