The world's OLDEST MULTI-ARMED Starfish!! A lesson in Starfish Evolution! 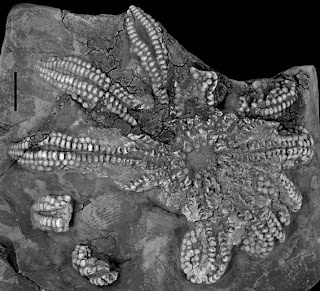 Today, a cool post with contributions from my colleague Dr. Liam Herringshaw who blogs at the Daily Liam

and he's written two very interesting papers on the OLDEST known multi-armed starfish! Most of this blog post is based on this paper in the Zoological Journal of the Linnean Society. But he's also written this paper in Paleontology about the fossil starfish diversity from the Silurian of England.

So people know that MOST starfish have five arms. But a bunch of starfish species all over the world have 6 ore even more arms..many have about 10-15 arms..up to 50 in the Antarctic Labidiaster.

Among the better known of these is the predatory Sunflower star (Pycnopodia helianthoides) from the west coat of North America....
Multi-armed starfish occur in tropical (for example, Coronaster) and cold-water (for example, Labidiaster or Solaster) environments as well as in shallow-water (Coscinasterias or Pycnopodia) and deep-water habitats (for example, the Pacific California Rathbunaster or the brisingids).

Liam's PhD work focused on, among other things, fossil starfish from Silurian deposits (about 444 million years ago) in the English Midlands and Welsh Borderlands. His work introduced him to this amazing beast..

The legendary Manx naturalist Edwin Forbes described the fossil in 1850 (this is the Forbes for whom the Atlantic starfish Asterias forbesi is named), calling it Lepidaster grayi.

The name is composed of the Ancient Greek for "scale"...Lepidos and -aster for "star" for the scale-like body elements. Forbes named the species for John Gray, one of Forbes' colleagues and fellow scientists.

Based on Liam's accounts, it apparently not clear to Forbes if his fossil was even a starfish!