This week is busy for travel, etc.. So what do you get? yes! Its time for BRITTLE STAR COLOR EXPLOSION!

Let's start out with some Arthur Anker goodness!

Ophiothrix spp. below Fantastic images below by Michael Zeigler via Flickr...

It lives commensally on ANOTHER echinoderm! Feather stars!

An outstanding ophiothricid in pink and blue...
This one from Wild Singapore looks the same

Ophiothricid on a sponge..
Arm spines!

A few words today about SYNAPTID sea cucumbers! (i.e, Family Synaptidae). These are a family of unusual sea cucumbers which are observed in shallow/SCUBA depth waters in the tropics! There are over 120 species of synaptids which occur primarily in the Indo-Pacific.

Synaptid sea cucumbers move pretty actively via peristalsis (i.e., body pulsates in a manner similar to that of worms. They seem to have lost any external manifestations of tube feet..
Synaptids have a well-developed array of feather-like feeding tentacles they use to move organic food into their mouths. Here's a video that shows one alive and kicking!

As the video shows, synaptids move along the bottom in a snake-like-fashion using their tentacles to move food into their mouth as they move as this species (Synapta maculata) from Lembeh Strait in Indonesia is doing..

This shows how long these get.. Some reach 6 FEET long...

Some are decoratively patterned!
But while some species are huge and massive, others are tiny and form HUGE aggregations...

In Synaptula spp., you'll often see hundreds of them on a single sponge! What I like to think of as a veritable city of sea cucumbers!

See all those wormy white things on the sponge? THOSE ARE SEA CUCUMBERS! (the genus Synaptula sp.).
Another dense sponge colony overrun by Synaptula!
Here's a less populous one..
More!
some of them crawl around on purple sponges!
This is not the same sponge colony but a close up of a different one.. it gives you an idea of what's they look like (close up).
But what are they doing? Presumably this posture of them reaching upright into the water is feeding,i.e., taking advantage of the water currents.  Sea cucumbers living on a sponge is actually a pretty convenient place to live.. as sponge filter water, they likely accumulate all sorts of potential food particles that Synaptula can take advantage of...

Amazingly, this is only the TIP of the iceberg where these animals are concerned..but that will have to wait for a future post!
Posted by ChrisM at 11:50 AM No comments: 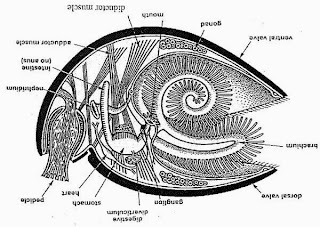