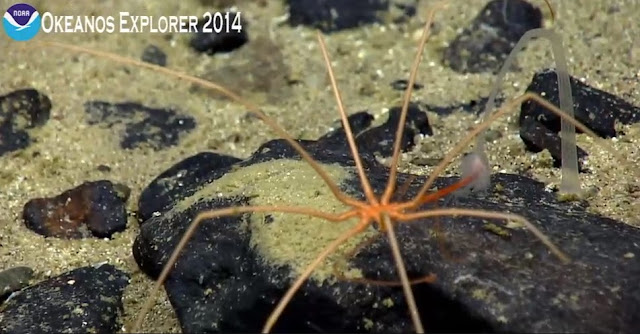 Many of you know that I occasionally "call in" when the NOAA deep-sea research platform Okeanos Explorer goes out to see on its missions. (remember the next leg BEGINS APRIL 27  http://oceanexplorer.noaa.gov/okeanos/media/exstream/exstream.html)

Mostly I call in on starfishes or echinoderm biology..but I do have a broad interest in deep-sea biology. And I just LOVE seeing observations like the one above: a weird animal doing something no one is familiar with!

...BUT of course, our ship and shore-side scientists can't know EVERYTHING. We'll often observe an event, many of us make note of it in case we see it again and often times we'll move on.... forgetting about it until such a time when the observation comes up again.

ONE such observation was one from 2014 on the Atlantic Physalia Seamount wherein we observed a sea spider in the genus Colossendeis sp. with its proboscis (that's the long cigar shaped feeding tube) stuckINTO into this hydroid (an animal similar to a Hydra from freshwater)! Was this feeding? Was it NEW?
A brief into: Sea spiders are not spiders. They belong to a group known as the Pycnogonids (also called the pantopods) which are mysterious arthropods. Some folks consider them distantly related to the greater group of arachnids whereas others think they are even more unusual...

Most sea spiders are pretty tiny and are less than about an inch (2 cm) across and its not unusual for them to be quite cryptic. So even though they can be present, you really DO have to look for them...
Here a photoessay of tropical, shallow water species by scientist/photographer Arthur Anker displaying some spectactular colors!   Here's a spectacular male carrying eggs.. 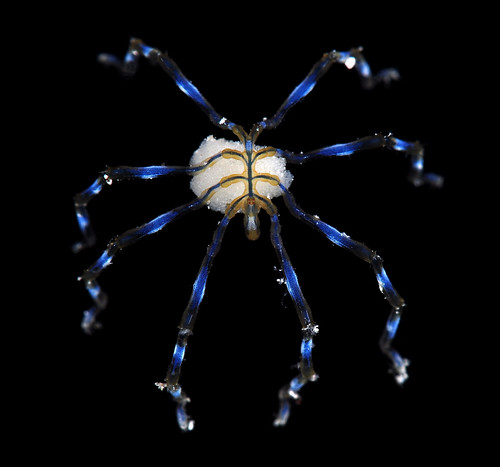 Many live in shallow water but are never seen (hidden and small)... but that's NOT a problem with the deep-sea and Antarctic species!  There's one frequently encountered genus: Colossendeis which is one of the largest known sea spiders reaching a leg-to-leg diameter of over 50 cm! that's almost a FOOT and a HALF!

Most members of Colossendeis live in the proper deep ocean abyss: roughly 1000 to 5000 m and also in Antarctica where the cold-waters allow them to occur in relatively shallow water settings.

Note also the sizeable cigar shaped projection at the top end! That's called the PROBOSCIS! That will be important later! That is presumably what they use to feed. 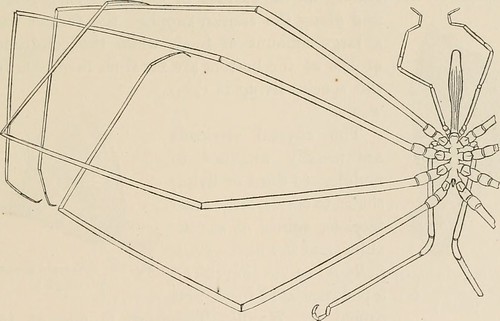 Unfortunately, there is relatively little information known about sea spiders..... And the deep-sea species? Even less!

So, were the observations something unusual? Has science encountered something like that before??

But much to my delight: YES! There WAS a previous account of sea spiders feeding! and WOO HOO!  It turns out my friends at the Monterey Bay Aquarium Research Institute in Moss Landing, California actually observed something JUST LIKE THIS in 2010!!! Here was their blog post about it!

The paper, by Caren Braby, Vicky Pearse, Bonnie Bain and Bob Vrijenhoek was published in Invertebrate Biology in 2009, 128(4): 359-363. and it documented "Pycnogonid-cnidarian trophic interaction in the deep Monterey Submarine Canyon"

They observed the same genus, Colossendeis, but at least two species, C. gigas and C. japonica feeding on commonly encountered sea anemones in the deeps of Monterey Canyon. 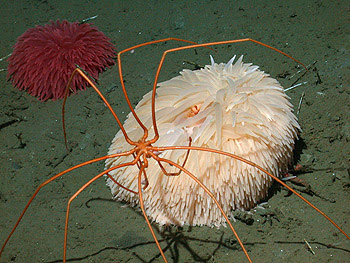 Braby's paper reveals that only Colossendeis in Antarctica had been observed feeding. These animals fed on limpets and bristle worms and in 1999 sea spiders were observed feeding on sea anemones

Braby et al.'s observations were the first for deep-sea Colossendeis (as opposed to Antarctic) species. Her team's work focused on their feeding on the deep-sea "pom pom anemone" Liponema brevicornis, an unusual sea anemone which literally "rolls" along the bottom of the deep-sea in a manner similar to a tumbleweed!

After the last 2017 Okeanos leg in the Phoenix Islands, I rounded up a BUNCH of the sea spider-feeding observations and decided to share them here as a comparison! Who knows? perhaps it will inspire a further paper!

Remember that NOAA's Okeanos Explorer program has captured these images and made them available for EVERYONE's enjoyment! Please remember that the next time someone talks about government funded science!

Pacific Observations! Over the last few weeks of the Phoenix Island expedition, we saw a BOUNTY of sea spider feeding observations!

Winslow Reef: This one had its proboscis firmly ensconced into this flytrap anemone and was apparently sucking something out of it! The rather lethargic looking appearance is likely the result of being on the receiving end of whatever is going on here... 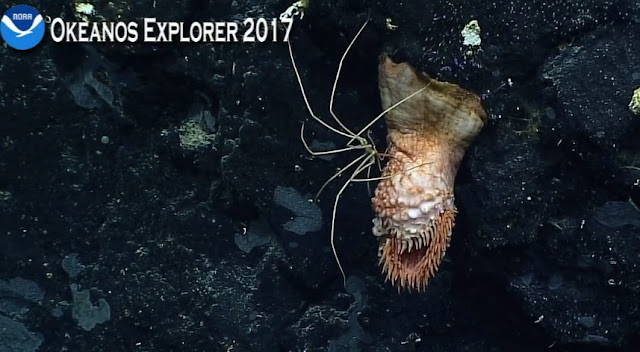 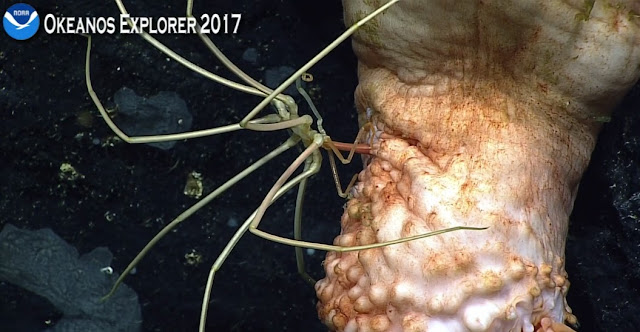 And ANOTHER on Winslow Reef! that was QUITE a dive! Here's another flytrap anemone with a sea spider attacking it!   As we saw earlier from Monterey Canyon, sea anemones and other cnidarians seem to be one kind of preferred food! 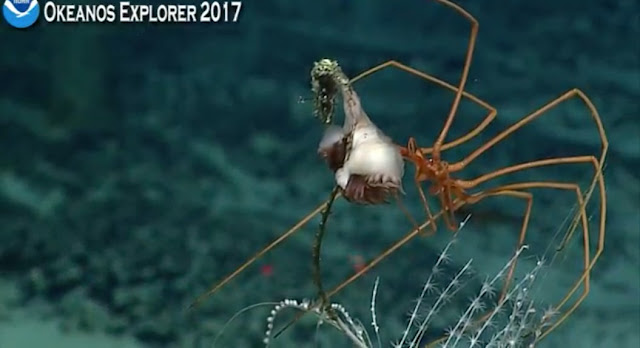 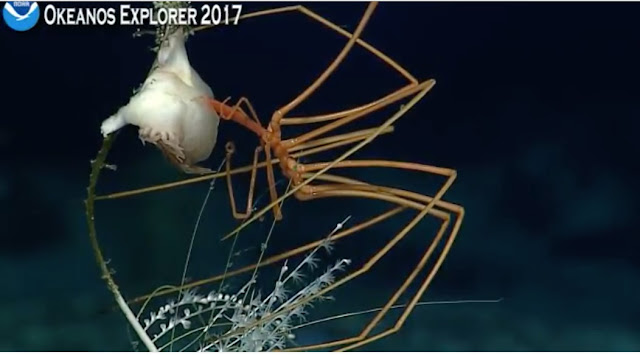 Baker Island we saw one attacking what was identified as a cup coral...The proboscis seemed to be "drinking" pretty heavily on this one... 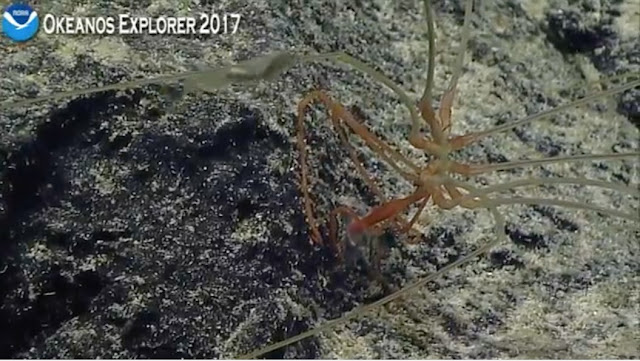 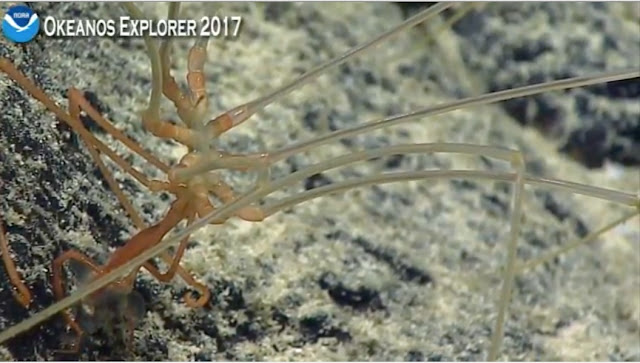 Howland Island.....and just for good measure they saw this one crawling over a glass sponge

More Atlantic Feeding? Here we had a sea spider in the Atlantic Nygren Canyon which has been identified as Pallenopsis (thanks to Bonnie Bain), climbing and possibly feeding on this sea pen. 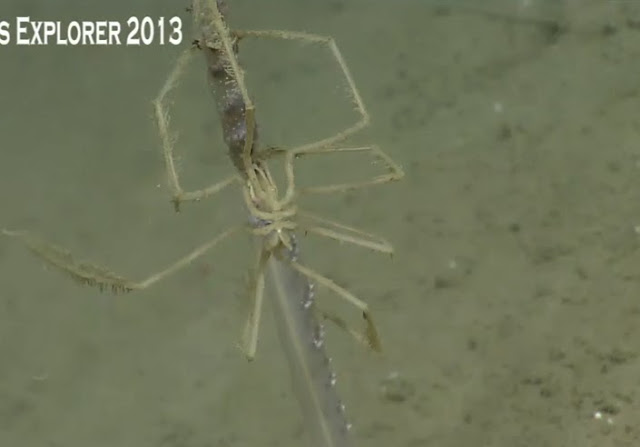 So, unfortunately I'm not really a sea spider taxonomist, so beyond the genus Colossendeis, I'm not sure how many species we are looking at here..but images such as this inspire many questions: Is predation specific to species? Or generalized?  How significant are these events to the ecosystem?
Do sea spiders attack the big colonial corals as well?

Stay tuned for the next exciting episode!
Posted by ChrisM at 6:35 AM 6 comments: