Happy 2016! And a fine one it has been so far! I'm on my annual holiday travel to San Francisco visiting friends, family and my colleagues at the California Academy of Sciences..

During this visit, Curator Bart Shepherd, a colleague of many years from our days at Steinhart Aquarium indulged me in showing off this recent collection from the Academy's scientific expedition to the Philippines: the benthic ctenophore Lyrocteis! Possibly Lyrocteis imperatoris.. 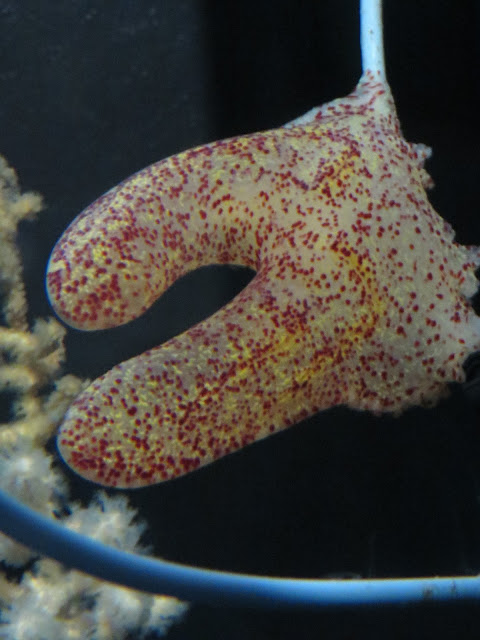 These are inspiring animals. They're not only big (about four to 6 inches tall) but they are also WEIRD things that nobody (other than scientists) ever gets to see, but now? thanks to social media and some excellent aquarium science.... these mysterious animals may actually get some time in the sun!  This aquarium in Japan has actually be able to breed them

But WHAT ARE THEY??
I have described and mentioned benthic or "bottom" ctenophores (= comb jellies) before (and recently! see here).

Long story short: Most comb jellies are midwater (=pelagic) swimming gelatinous animals... but SOME of them are unusual in that they have adapted to living on the sea bottom.. Some live on sea stars, while others on coral.

Today I thought I'd just focus on this one genus: Lyrocteis the only member of the family Lyrocteidae. Lyrocteis includes two species, one from the Antarctic and one from the tropical Pacific.
The name apparently refers to its resemblance to a Lyre. (think of the root word of "lyric" which means "of or for the lyre") Neat, eh?  and "cteis" which refers to the comb rows present in all "comb jellies" 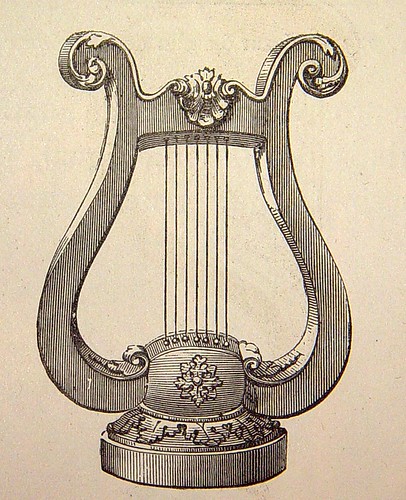 There's not a lot known about them. They feed (see below) in a manner similar to the swimming species using long tentacles to capture food. When described in 1941 (here), they were labelled as "sessile" but the Antarctic species was described as being able to move 1 to 2 meters per day (here to see)

Here's an individual identified as the Antarctic species: Lyrocteis flavopallidus 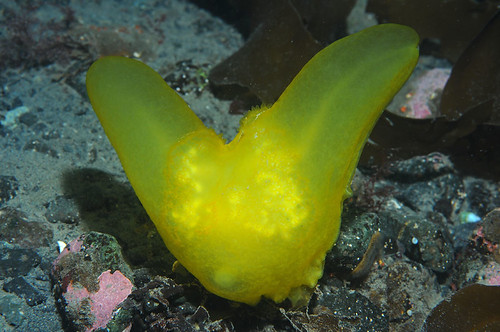 2.... and the other one?
and there's a second species known from throughout the tropical Pacific called Lyrocteis imperatoris, described in 1941 by Professor Taku Komai at Kyoto Imperial University to honor Emperor Showa of Japan. The original specimen was apparently collected from Sagami Bay by the Biological Laboratory of the Imperial Palace. He described it as a "strange marine animal.."

This species is described mainly from the tropical Pacific. Possibly the Indian Ocean I suppose (based on the ones below) but none are known from the Atlantic.  Most of these live in relatively deep-water, at the lower edge of SCUBA depth to significant depths in the deep-sea (>500 m).

Here's the species we saw in the Hawaiian Islands during the Okeanos Explorer cruises in September. In theory.. there are only two species.. the Antarctic one and the tropical Pacific species. 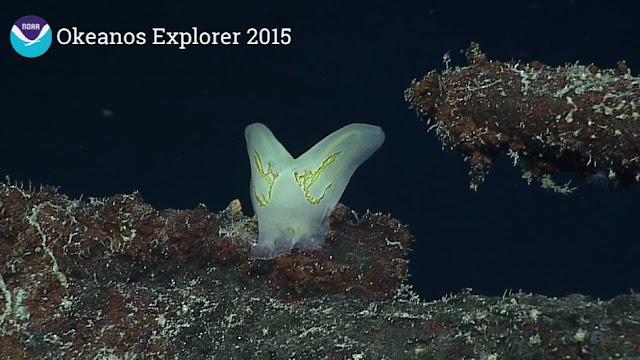 So, this is possibly Lyrocteis imperatoris.. but exact details remain elusive.  A great MANY different color variations have been observed in observed specimens of Lyrocteis.. This makes biologists wonder if they are seeing multiple species??? Or perhaps one species with a lot of color variation??Dr. Komai, the scientist who described this species noted a great variation in color when originally collected.

Its possible (and even likely) that there is more diversity (i.e., more species) but the animals don't make it easy to study them.

Why? Because they aren't seen frequently and when they do, collecting is difficult. The individuals
aren't easy to sample and for whatever reasons, the body of these animals is extremely difficult to preserve..so intact specimens aren't generally available to study...

Here were some spectacular red ones from Okinawa.. 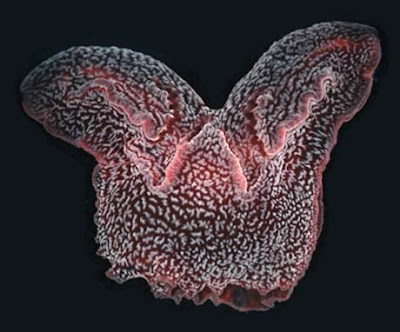 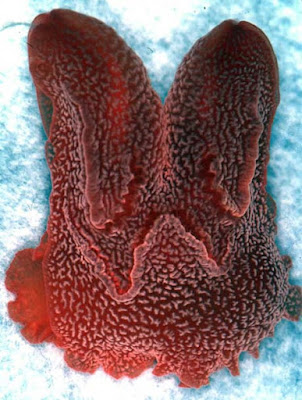 Back in 1997, the Coral Reef Research Foundation and the Bishop Museum were studying the "Twilight Zone" aka the Mesophotic zone and encountered this white benthic ctenophore which also looks like Lyrocteis 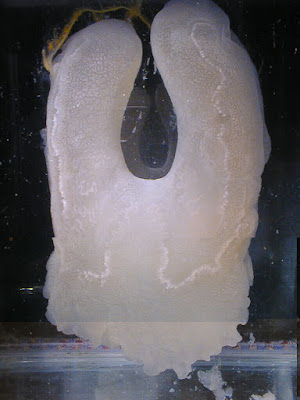 Bart Shepherd & the California Academy of Sciences Expedition to the Philippines encountered THREE color forms... the speckled one above and two others: a purple/red one and a yellow one...

and here's a South African species in the Indian Ocean. Another color and puffier..

Feeding!
One of the nice things about our modern age is that video and image observations have become easy and of high quality

If you have Facebook, here's a feeding video of the Lyrocteis collected by Steinhart Aquarium from the Philippines..


Here's one of the purple south African species observed via video with its feeding tentacles extended...


Here's a nice one of a Japanese species with tentacles extended... from SHINKAYABLOG which translates to "deepsea" blog  This is basically similar to the way that swimming comb jellies feed... 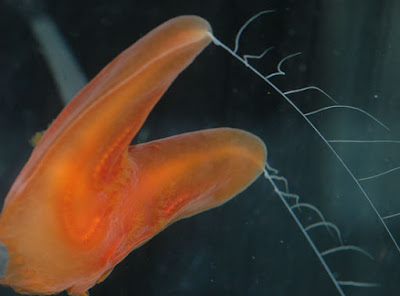 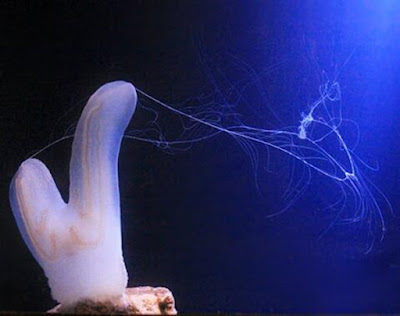 This also explains the kawaii (cartoon mascot) for Lyrocteis imperatoris!   Note the feeding tetnacles catching the fish!!
Amazingly, someone is SO fond of these that they have made tiny magnets out of them!

3. The Story About its original discovery!!?
Dr. Komai, in his 1941 description of this species recounts an interesting story about "when" this species was discovered. Because apparently, although he described it in 1941.. he was NOT the first one to have encountered it!!


What makes the story of the discovery of this remarkable ctenophore more interesting is the fact that another specimen of evidently this form had been obtained previously from the same Sagami Bay and recorded by a Japanese zoologist, but without any idea of its real nature....

...in August, 1896, we find a short note in Japanese by T. N. (obviously Tokichi Nishikawa, the inventor of the famous cultured pearl) entitled " A curious animal" with rather good illustrations, one of which is reproduced in Fig. 3. The accounts and figures clearly show that the 'curious animal' was no other than a specimen of the present platyctenid. 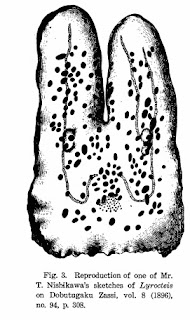 " Nobody who saw it at that time could tell what it was. The real nature of this form thus remained enigmatic only to be made clear forty-five years later."

..and don't worry, I haven't given up echinoderms! But travelling makes you appreciate opportunistic topics!!
Posted by ChrisM at 8:40 AM 1 comment: