Crinoids, aka Feather stars are probably the least familiar of echinoderms to many people. They've been around for awhile and you can often see their older Paleozoic ancestors with stalks in fossil beds throughout the world.

But most modern crinoids almost resemble plants (albeit stunning ones). The picture above shows a typical "feather star" or comatulid crinoid. The arms have feathery appendages called pinnules which are used for capturing food.

To give you some reference.. here's a generalized diagram. Food goes into the mouth located on the "inside" of the cup where the arms meet.
I've often tried to make several echinoderms more "visible" to people by sharing some incredible imagery of them-from perspectives that might be unfamiliar. Some of my posts on ophiuroids here and here for example...


Here is a very busy picture of the many structures surrounding the MOUTH (at center covered by more tentacles) (critter from Fiji) (image by Jaw'sDad-Jeff Williams):

Here's a great picture of the UNDERSIDE of a feather star. See those tentacle-like things wrapped around the whip coral?  Those are called "cirri". Those are the "feet" that adhere the remainder of the animal to its perch.   This image by "sabahsharky"

Blue Crinoid Close up.. from Sulawesi, Indonesia.  These are the feeding arms with yellow tipped extensions called pinnules. Image by Richard Merritt, FRPS.

A stunning image of Oxycomanthus bennetti from Indonesia by il Cosaro.


A nice close up of the feeding arms. Three Photos below by Geoff Spiby.

A stunning shot of a red-white crinoid by Russel Taylor

Another amazing close up by Russel Taylor

Two photos of crinoids from the Philippines by Courtney Platt

A neat red/yellow crinoid from the Philippines Image by Jex207

There's a shrimp in this..but mostly I just think the arms are amazing. Photo by MerMate

And a fossil for comparison. Note that the cup is upside down. Photo by zxgirl

And one of these days I will follow up with the commensals that live on crinoids! The mimicry is stunning...
Posted by ChrisM at 9:57 PM No comments:

Recently made available to the Echinoblog!  by Emily B.!  Some swimming sea cucumber (Enypniastes, I believe..) video from the Gulf of Mexico...


Here's a few more classics-all conveniently here in one place!

As I write this with 2AM jet lagged eyes I'm listening to the unique techno sounds of Brussels' unique nightlife from my hotel room.

If you have been following my twitter feed (on the side bar if you missed it!) I have been tweeting the 14th International Echinoderm Conference   under the tag #14echino 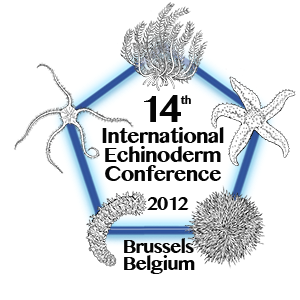 currently being held in Brussels, Belgium at the distinguished Royal Academy of Sciences of Belgium! 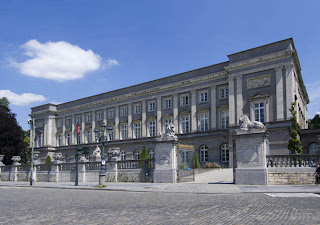 As I write this, we are on day 3 with 2 more remaining. This is actually the 40th anniversary of Echinoderm Conference meetings, the first of which began in my own Washington DC in 1972. Today the meeting includes 250 participants from 43 countries!

Here are some snapshots of Echinoderm Conference life...

SWAG! Meetings gotta have a t-shirt with a cool logo and a satchel to carry all of those program books and etc.! 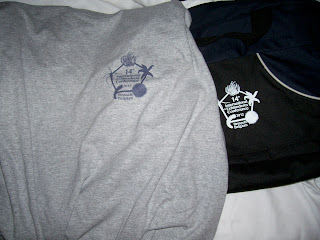 One of my colleagues from Japan is a fellow kaiju/kaijin/monster enthusiast!  Here is a little figure he brought me of a Japanese starfish monster!

The name is HITODANGER..a combination of the Japanese word for starfish... hitode+"danger"!! 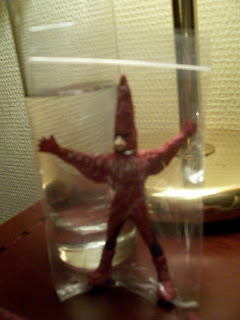 Here is what the orignal looked like from the show... 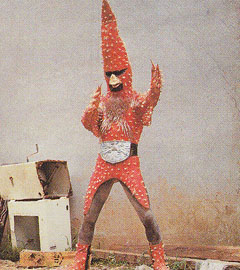 Brussels, Belgium was a gorgeous venue!  A city known for many things internationally...

Such as its architecture... 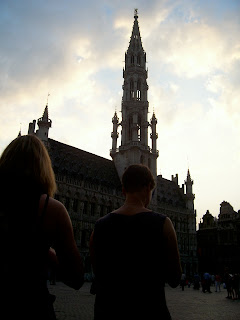 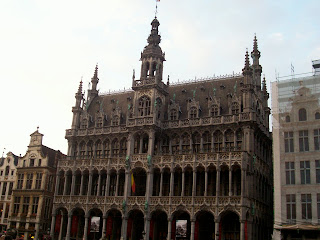 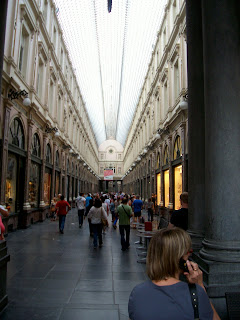 And for eating mussels! (moules)  Here is a giant example from the park...(tree for scale) 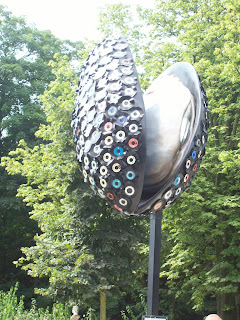 and here we see it compared with some proper mussels from a recent meal... 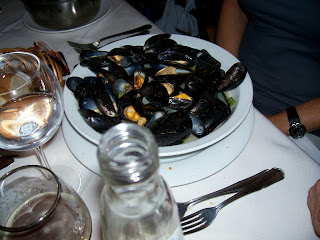 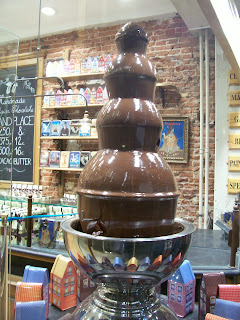 Look forward to more on the Twitter Stream under the tag  #14echino!
Posted by ChrisM at 6:03 PM No comments:

Probably one of the great allures of paleontology and studying fossils, especially OLD fossils, is this:
It's Weird.
Its probably (evolutionarily) Important.
Its Rare (or rarely encountered) and we know almost nothing about it.

These were a group of Paleozoic fossils that occurred in the rock record from the Early Ordovician to the Permian (that's about 475 to 254 million years ago!).

Life in the Paleozoic was MUCH different from what we recognize today. Continents and oceans were different and the animals that lived in them were a menagerie of weird evolutionary experiments. Many remain around today, but there are many unusual forms which have been long extinct.
There are plenty of fossils from the Paleozoic but some had weird solutions to problems and often, we lack paleoecological data. So, it can be quite a mystery trying to deduce HOW and WHAT some of those fossils were when they were alive.

Ophiocistioids look like they escaped from a Cthulhu family reunion.  The name is composed of the Greek words ophis ("snake") and kiste ("box"), (and you can see why below) so the "Snake Box" echinoderms!

These animals were free-living (as far as we can tell) and were basically a low rounded dome-shaped animal with a bunch of tentacle-like, large tube feet emerging from the five radial (=ambulacral) regions.
There are a lot of different kinds of ophiocistioid fossils with some 39 species (with the most species present (n=10) in the Devonian) present in a whopping 15 genera within 6 families found throught the world, but mostly from North America and Europe with some known from Australia.

This might mean there was a huge diversity of them in the past or who knows? Maybe we just found them all. (although the literature suggest new specimens and thus new species are awaiting description!)

A useful paper on diversity of Ophiocistioidea can be found here by M. Reich and R. Haude.

The first one ever discovered with described in 1889 by W.J. Sollas from the Silurian of the United Kingdom.

What do they look like??   Here's a plate from a monograph by American paleontologist Charles Schuchert (1915).  The top figure "reconstructs" from the animal as seen from the top 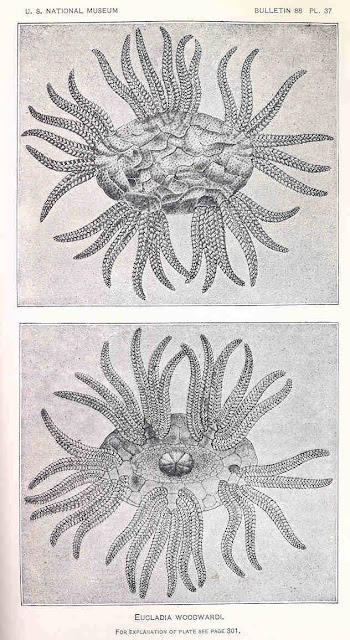 This pic gives you some perspective as to what the animal looks like from the side.. The animal below is called Gillocystis polypoda from the Devonian of Australia.

Here is the ACTUAL fossil of Gillocystis polypoda to give you a notion of what the fossil looks like by comparison.  (These are actually pretty small..the scale bar is about a cm I think?)

The odd one below is called Volchovia and was described from the Ordovician of Russia. It was much different in that its got these much larger plates arranged into a more discrete upside-down vase like shape.

Preservation-What part(s) are we seeing?

Complete body fossils of ophiocistioids are pretty rare and as you can see-what you get can be pretty varied.

There are a lot of factors that can affect how readily an animal preserves/fossilizes including the skeleton and relative "stoutness" of the body as well as the liklihood that the environment would be conducive for preservation (in other words-it needs to be buried quickly before the body distintegrates among other things).

In spite of all of these problems, enough fossil material is available that some inference about their life modes has been made. Sometimes you don't get anything left but these tooth like fragments called goniodonts.
Goniodonts are basically part of the jaw-like apparatus that you can see in the cross-section of the animal below.  These operate differently from say, sea urchins in their orientation. Note how they are oriented horizontally?  It was thought that they operated in more of a "saw" like fashion, shearing off food.

Sometimes, that's it.  Like finding teeth from a vertebrate or scales from a fish.   You can tell it was there-but that's about it.

How Did They Live??
There really isn't a lot of info on how these animals might have lived, but there is some information...

Info is taken from the Treatise on Invertebrate Paleontology [U-3(1): pg. U174 by Georges Ubaghs and etc.] and from a recent paper by R. Haude in the 2004 Munchen Echinoderm Conference Proceedings (p. 409-416) cit. link is here.


One of the important things to realize about fossil "paleoecology" is that often times, scientist have to deduce the function of a structure from the external morphology of the animals of interest. We work on the underlying assumption that features will behave similarly to features on modern animals (e.g., teeth serve roughly the same purpose on a Paleozoic tetropod as on a modern cat).  This is often what makes it so difficult to work on Paleozoic organisms because sometimes, there is no modern example for comparison...

AND podia (tube feet) that have scales on them

The "armored" Rhenosquama (above) was compared to a second "naked" genus, Rotasaccus which had a more weakly developed skeleton but instead had small tiny skeletal bits in the very flexible body wall.


Tube feet between the two were different. The more strongly armored Rhenosquama could probably move more quickly via longer podia versus the podia on Rotasaccus which had podia with an adhesive disk which suggests it could have climbed up surfaces.

Haude (2004) suggested that the longer, more pointed podia (in the armored form) are similar to the tube feet of some sea cucumbers, such as sea pigs 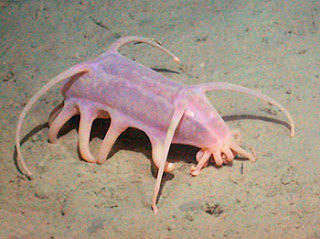 As opposed to the more suckered tube feet which would have given them the capability for climbing surfaces and maybe living in "algal jungles" and other complicated environments.

Importance to Understanding Echinoderm Evolution!
So, amidst all of that discussion of the above discussion of "jaws" and "small skeletal pieces" in the body wall a pattern emerges. One that has not escaped the studious paleontologist.

What modern echinoderm has a jaw arranged into 5 part array set around the mouth like this?  With a dome like body? 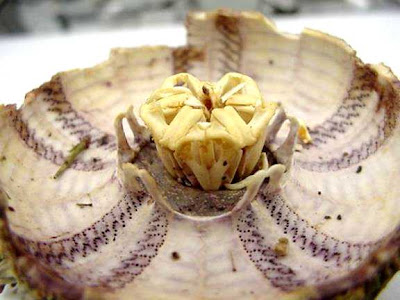 But on the other hand, Rotasaccus (and presumably other taxa) have a fleshy body with skeletal bits! This is most like what is found in sea cucumbers!
Ophiocistioids thus, appear to have a morphology INTERMEDIATE BETWEEN SEA URCHINS AND SEA CUCUMBERS.

This has actually been so much the case that they have been historically classified as a member of the "Echinozoa" which supports sea cucumbers and sea urchins as closely related.

One such evolutionary hypothesis (not the only one) is outlined here which posits ophiocistioids as more closely related to sea cucumbers. But I'm sure there have been other arguments may place it more closely to sea urchins.
These fossils invite a lot of intriguing questions that can't simply be explained with extracting DNA from the living members.

Is this form ancestral?  or more like a "dead end"?
What about the evolution of the jaw in sea urchins?
Is something like an ophiocistioid closely related to early Paleozoic sea urchins?

What role did such odd but so damn cool looking beasts have in a Paleozoic ecosystem? How does something that look like this, live?
Personally, I'm kind of hoping that some of these turn out to be flying, predatory monsters! Ha! Hollywood here I come!