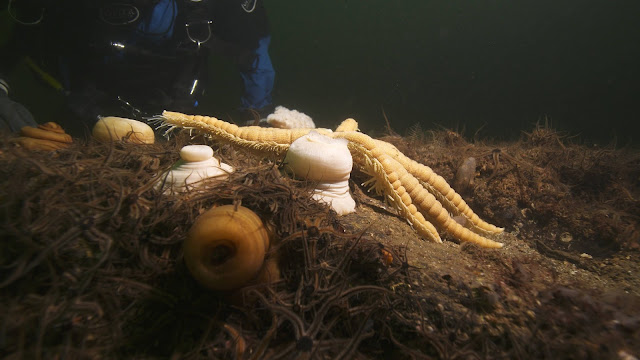 GREETINGS! and Happy New Year! Yes.  Sorry. Its been awhile since I've blogged.. Lots of travelling and research are a good thing...but time for essential outreach can sometimes be fleeting!

I've written about the genus Luidia before.. these are predatory sand stars which are found all around the world.

They can vary in appearance and in some places they are very abundant.. Most species are shallow and occur in temperate tropical habitats. Although many species are five rayed.. some such as L. ciliaris can have seven or more arms. Some species in the tropical Indo-Pacific have very striking patterns and can reach almost 2 feet in diameter!

Luidia ciliaris is found pretty much only in the North Atlantic although it has likely close-relatives in nearby areas. This species is regularly seen by divers in the United Kingdom, France, Spain and etc..

Interestingly, he noticed that THIS one had a VERY unusual banding or strange segmentation on the arms!

He came to me with the question.. WHAT IS the BANDING??? That strange surface texture that is visible on the surface of the animal???

You see it in headlines a lot...but I will actually say it "Scientist (in this case-ME) was baffled!!"

BUT, it turns out other people on social media have seen it before.. even if they didn't realize what it was... 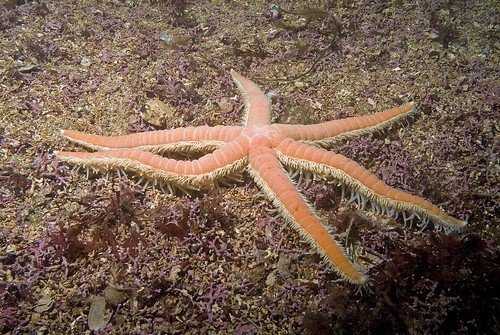 Here is a normal one again for comparison.. the top surface is even.. NOT with the strange surface segments present along the arms..
So, when I see deformations like this.. I always have to wonder about two possible hypothesis:

1. Is this a "normal" part of this species' behavior?? Something which we have simply never seen before?
2. Or could it be NOT normal... What could this mean?? I don't know. But years ago? Sunflower stars in British Columbia began experiencing weird "arm twists"  and it wasn't much longer after that, that the entire population of sunflower stars suffered from SSWD

One might see from Andy's video that the animal was in the process of moving through a field of brittle stars..could the odd surface texture have been caused as a defense? from irritation? stress?

This is why "Natural History" becomes important! and how citizen scientsts, including everyone from divers to intertidal naturalists have something to contribute!

For example, this Twitter thread from July 2017 shows a specimen of Luidia ciliaris washed up on a beach with the"banding" on its arms.. (note arm in front above the person's left hand)
One person in the thread speculates that the star was not in good health...was it? Possibly just stressed from being washed up??  Certainly, this was idle speculation and it is difficult to know what was going on...

So, I am putting this OUT THERE to let people be aware of it.. and who knows?
WHAT DOES THIS MEAN???
Perhaps a pathologist, natural historian, ecologist and more? Might take up an interest... More data and MORE OBSERVATIONS could well help us figure out if this is something to be concerned about..
(thanks to Andy Jackson and Bernard Picton!)
Posted by ChrisM at 10:27 AM 1 comment: