And a HAPPY NEW 2017 to everyone! Yes. Obviously everyone has noticed the Echinoblog has gone to an "irregular" publication schedule. This is one of those "be careful what you wish for" issues- a lot of museum travel = a lot of new discoveries and thus papers and more work!  And so, like a lot of artisan comic books.. I'll be publishing when good topics and/or when the inspiration strikes me.

Today, is a NEW paper (published just last year) by Brooke Ingram, Kylie Pitt from Griffith University and Peter Barnes from the Australian Dept of Parks and Wildlife in the Journal of Plankton Research!

Their work presents NEW data on the relationship between the "jellyfish hitchiking" brittle star Ophiocnemis marmorata (on the moon jelly Aurelia aurita)! The species occurs widely throughout the Indo-Pacific from Japan to India. I previously wrote about this phenomena back in 2009! here.

1. How many different types of Jellyfish species does Ophiocnemis marmorata occur ON??
The paper reports at least five or six, including at least 3 species of Rhopilema, Cephea cephea (the cauliflower jellyfish), Netrostoma and Aurelia aurita. But other internet records  and social media show further hosts.. such as this hydrozoan, Aequorea from Thailand..

And here's a blog that documents this brittle stars on the "hairy" jellyfish. Lobocnema

2. Where/How many are present on a jellyfish host?
Based on their sample of 92 Aurelia aurita, the authors, found that 79% of them (n=73) hosted brittle stars! quite a large number. Most of them were present under the bell or on the "oral arms" (the lobes hanging down from the bell) 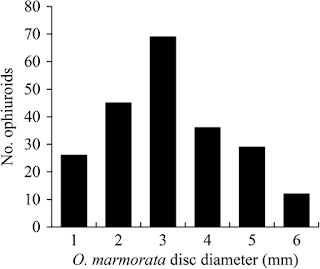 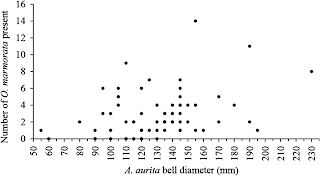 The largest number of brittle stars recorded (n=14) occurred on a medusae with 155.0 mm bell diameter.


Its also worth noting that the brittle stars stay on the medusae ONLY within their home range. Many of these jellies, such as Aurelia (i.e. moon jellies) actually go beyond tropical settings and they really aren't seen on jellies in cold to temperate waters..

3. So, what are the brittle stars EATING??
The authors used a novel new method which basically breaks down the organic components of specific isotopes (Carbon and Nitrogen) and looks for how much of those isotopes is present in the subjects versus that which is provided by the environment.

Long story short: The data indcates that most of the food sources in Ophiocnemis seems to come from PLANKTONIC SOURCES! (i.e. the mesozooplankton) and NOT from the medusae itself and there were not any observations of Ophiocnemis filter feeding (i.e. arms up in the water).

And so the authors suggest that they are what's called KLEPTOPARASITES (a great word-really!). In other words, they take food directly away from the jellyfish out of the mouth or the oral arms, stealing or scavenging food from the jellyfish which are known as big pelagic predators.. What would be called "indirect food sources"...

There are several reports of other brittle stars that practice "kleptoparasitc" behavior.. i.e. moving down into the feeding arms or near the mouth and stealing food directly from the host. Some of it might not be a big deal to the host.. scraps and etc.. but meaningful to the ophiuroids..

4. Growth and Settlement..aka Living on a Changing Jellyfish World

Although its not entirely clear HOW these brittle stars get up onto the jellies, one reasonable hypothesis is that they settle there as swimming larvae. Many of the brittle stars observed were tiny (smallest =1.0 mm disk).

Larger medusae seemed to carry a higher "brittle star load" than smaller ones. Its not clear exactly how/WHY certain species are chosen. Whether it is simply the physical dynamic of having a larger  medusae that facilitates more larvae to settle or if perhaps there are other cues??

It also turns out, based on further obsevations by others,  that this species DOES occur on the sea bottom on its own. So, its possible that as they get larger.. the brittle stars fall/jump/ or otherwise "settle" away from their floating substrate.

Or perhaps the jellies themselves die, as we see here on this unfortunate jelly in Singapore!

5. Why go to all the hassle??
Well, one must ask, WHAT does a brittle star get OUT of basically jumping onto a jellyfish as a freshly settled larvae and living on it until it gets too big and falls off??

Obviously, they are getting FOOD. So that's one thing. And to a certain extent they are being PROTECTED..because what better thing to live on that a giant stinging gelatinous mass that eats fish!

but perhaps the most important benefit is DISPERSAL.. that is the species is carried wide and far..
It was suggested that some medusae could carry these brittle stars up to 1000 kilometers from their point of colonization! 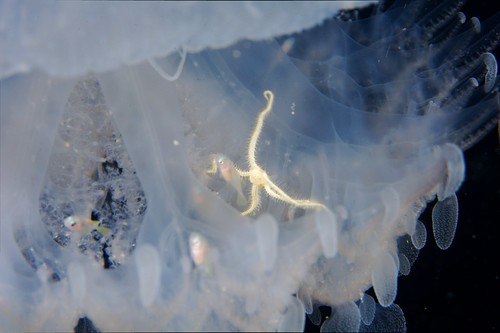 The apparent range of possible hosts adds further questions about the life mode and just HOW many different types of Ophiocnemis are present? And how do the different jellies affect how the brittle stars diversify and spread?