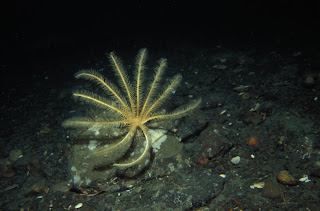 (from www.pangaea.de)
Today, a new installment of "Echinoderms? What are they good for?"

This is based on a paper by my crinoid colleagues in Paris: Marc Eleaume, Nadia Ameziane, Lenaig Hemery and others..in Deep-Sea Research!

Crinoids, aka Feather Stars, are echinoderms that are filter feeders-they capture food from passing water currents.

These animals are structurally pretty simple- a cup with a mouth and guts which sit at the base of a bunch of arms. Each of these have tube feet that help capture food and move it down to the mouth. 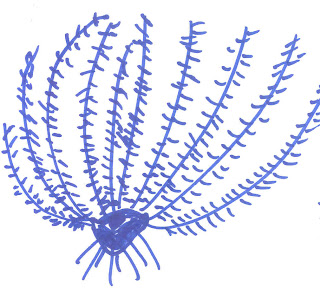 Where does this food come from? Water currents bring tasty organic bits or what-have-you...

Crinoids hold their arms up into the water to capture food particles...but often they do so at different angles and positions relative to the flow of water... like so.. 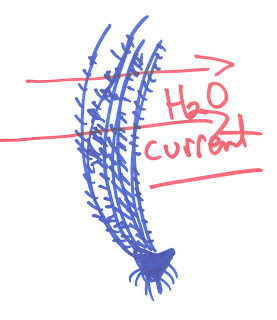 (From Echinoblog Art Department!)
The feeding "fan" created by crinoids is thus, consistently at a specific orientation (in this case perpendicular) as the current flows "downstream".

So, it turns out there's actually a USE for observing these animals when they FEED!

What if you could use the crinoid's orientation to actually determine what DIRECTION the current was flowing?

Eleaume and his colleagues took video footage from the 2007-2008 R/V Aurora Australis cruise operated by the Australian Antarctic Division, looking at 66 video transects of the bottom (each about 17 minutes long) in East Antarctica around Terre Adelie and the George V shelf. !!

While that may not sound like much, here's an example of what that video is kinda like...


Eleaume and his crew identified the number of crinoids, their position and feeding orientation.

(Figure 1A from Eleaume et al. 2010)
Based on these 66 transects, they collected a total of 1537 observations which were subsequently analyzed!!

The orientations of crinoids along each transect looked like this: 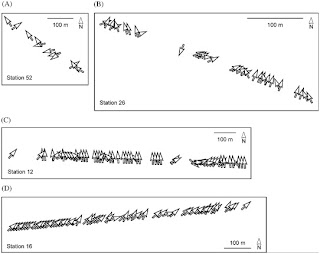 (Figure 4 from Eleaume et al. 2010)
Each individual arrow above indicates an individual crinoid's orientation in the current across a transect.

The multitude of individual arrows were analyzed with Natural Neighbor Interpolation, which is part of the ArcGIS program Spatial Analyst.

The top figure below is a map that shows depth as indicated by color and gives you a general idea of the region and local topography. 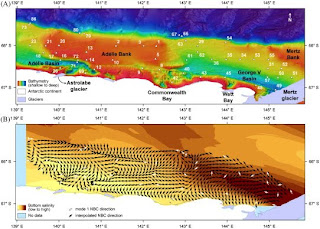 (Figure 2 from Eleaume et al. 2010)
This lower picture with all the arrows is essentially the combined data points that show the overall orientation and near-bottom-current flow of all the crinoids mapped onto the same area.

Eleaume et al. found that based on an interpolation of all the 1537 observations of crinoid feeding fans, there was an EASTWARD near-bottom current flow, becoming southestward over the Adelie Bank..

What are Near-Bottom Currents Used for?
Basically, this is a very clever way to use animal observations to obtain what's called oceanographic or hydrographic data. This is useful for a variety of reasons.

Near Bottom Currents (NBCs) are important because they give us insight into where larval animals/organisms (and eventually ADULT animals and/or organisms) will be dispersed and thus how they can be present throughout their range.

This can have important repurcussions for everything from invasive species to determining how climate change can affect where some species "settle out" when they become adults. 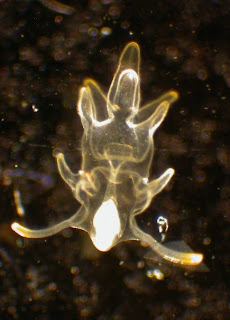 (yes, I know its not a crinoid larvae-its just to illustrate a point)
It occurred to me as well, that something like this would also be useful for reconstructing the paleoecology of crinoids, provided there was good enough preservation and all of the individual fossils were preserved in "life mode"...
Posted by ChrisM at 6:31 PM

At one "garden" that I have been collecting from the Ord., I have started taking strikes of all finds (not found in float). And while I haven't compiled the data, a large(>90%) majority strike east to west(calyx east-arms west).

I find this curious as the paleo-land mass in this area(Eastern Laurentia) was north to south???