Sexual and Asexual Reproduction in Coscinasterias! Two ways a starfish can get a date on Saturday night! 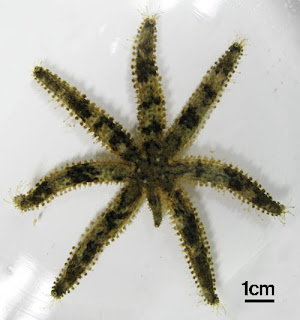 This week..an interesting story about a little starfish from the temperate-tropics that can go from being ONE to FOUR or even SIX starfish all by itself! An ability I'm sure everyone wishes they had when moving furniture or cleaning your apartment!

Data from this week's blog comes from the work of Daisuke Shibata and colleagues Y. Hirano and M. Komatsu (2011) in the new issue of Zoological Science 28: 313-317

The subject of today's blog, is this guy: Coscinasterias acutispina-a member of the Asteriidae that occurs throughout shallow waters in temperate to tropical waters in the Pacific. One sees this species throughout Asia and out to Hawaii (see this past Echinoblog).

And just to give you a sense of what the animal is like alive, here's a neat video of it turning itself over!

But one of the immediate things one notices about this species is how it always seems to have an unusual number of shorter arms. Such as in a specimen like this. 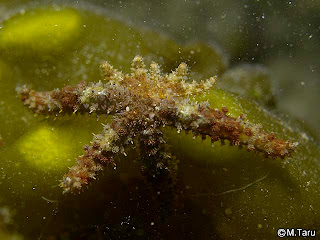 (this image is from Toho University's Ecosystem Research Center)

Its been observed over the many years since this species was described in 1862 that this species is what's known as fissiparous, or in other words, the animal is asexual-it can divide into two separate individuals!

The authors raised C. acutispina from embryos to juveniles and proceeded to observe how these individuals underwent asexual fission.

Here, the authors show examples of wild caught adults versus specimens which have undergone fissiparity while in captivity. 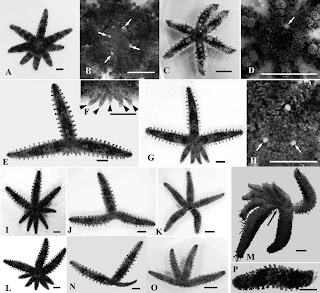 Ultimately, the authors raised three individuals after 12 months of growing the juveniles and rearing them out. It is quite impressive when you consider this dataset took YEARS to collect!

After awhile, these three began to undergo fission!! On the left side is the amount of time in months that proceed 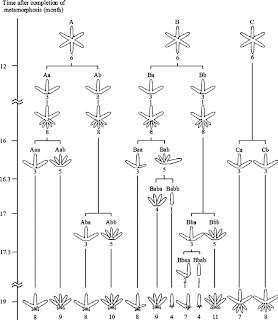 Their results were very intriguing (and were no doubt the result of a long wait!).

Over the course of over a year (19 months), these THREE individuals had essentially divided into TWELVE separate individuals! Not evenly...one individual into four, the second into six and the last into two.

But that wasn't all! After about 1-3 months, each one of the above (following second fission) had gonads and were able to produce reproductive cells (i.e., gametes-eggs or sperm).

So to summarize- the authors provided this handy-dandy flow chart of the "life cycle" of the sexual and asexual life of Coscinasterias acutispina: 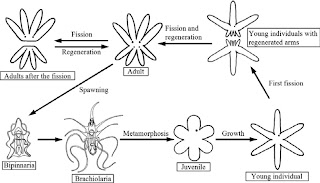 This is almost kind of reminiscent of the life cycle of something like a jellyfish, which also has alternating sexual and asexual life stages.

The part missing from the paper though is " What so interesting about it in the "big picture"? How is this adaptive for this animal's evolution and/or biology?
Here are some of my thoughts:

1. Dispersal. So, this is probably the most logically obvious benefit to being able to reproduce in this fashion. The more individuals are abundant, the greater they are able to carry your genome farther away. Those that survive and are best adapted-carrying on optimal reproductive material- can presumably also divide and reproduce later on.

2. Could asexual vs. sexual reproduction be more energetically expensive? A paper by Crump and Barker (1985) on the New Zealand species, Coscinasterias calamaria observed that those individuals with better quality food were more inclined to divide than those with poorer quality food. Its not clear to me which mode of reproduction involves more physiological energy..but perhaps different species switch off when times are poor?

Do the ecologists and fissiparous indivdiuals out there have more to add? Feel free to drop them in the comments!
Posted by ChrisM at 7:37 PM

Totally makes sense! If there's lots of food, (a) I can afford to divide and then grow my body parts back, and (b) my offspring will be both genetically identical to me and definitely in a place with lots of food. If conditions are kinda crappy, splitting would be a terrible idea because it makes me 50% smaller and also puts my offspring in a crappy place, but sexual reproduction lets me blow my gametes all over the ocean, where hopefully some of them will find a better place to live!

Parthenogenesis is usually associated with good living conditions, actually -- this is exactly what facultatively-asexual aphids do, except that they lay clone eggs instead of splitting in half.

Basically, the mobile larval stage is cheap and great for getting your offspring somewhere a long way away, but going straight to an adult clone is the way to go if you're basically looking to produce twice as many gametes next time you produce them!