Sea Cucumbers in Peril? A Look at the Fishery 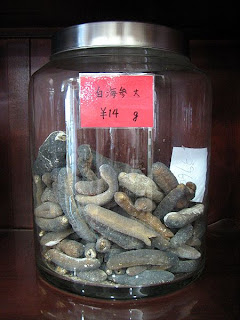 (thanks again to Wikipedia! I love you.)

Sea Cucumbers are known by many names! Including "teatfish" aka "sandfish" aka trepang and beche de mer and probably a bunch more if I looked around more.

These are all common names for members of the class Holothuroidea or the holothuroids (the group which also includes sea pigs!)

Sea cucumbers are unusual and interesting for many reasons-but probably one of the most important reasons that people study them today is because of ALL the echinoderms, these are probably the MOST heavily harvested for food!

While they seem unpalatable, sea cucumber is a HUGE global industry and as we'll see, one that is quite important.

A newly published review paper in Fish and Fisheries by Steven Purcell and co authors outlines the current "scene" for sea cucumber fisheries, takes assessment of how many and how much remains (ie. stocks) and looks at the effect exploitation has had on abundance and the ongoing potential for the species as an exploitable fishery.

What We Know about Sea Cucumber Fisheries (in general)

With the general decline of "fin fish" fisheries (e.,g proper fish) there's been a general increase in invertebrate fisheries.

Here we see a graphic from their Fig. 1 that shows how sea cucumber fisheries in terms of dried metric tons has grown over the last 60 years or so.. 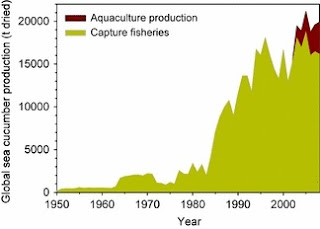 (Figure 1 from Purcell et al. 2011)
Aquaculture has only emerged recently.. we see the sea cucumber fishery jump immensely in the last 20 years. Some interesting factoids:

Sea cucumbers are often dismissed as sort of the marine version of earthworms. But if you stop and think about it-earthworms are pretty important.

I wrote this blog post awhile back about the effect that one tropical shallow-water species, Holothuria scabra have on sea grass beds. Basically, they ingest nutrients, aerate the sediment and so on. Their presence changes their habitat. 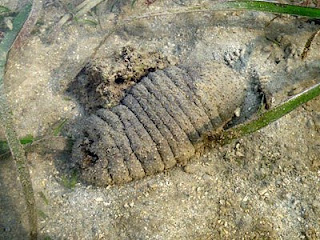 By extension, the diversity of animals that make a home out of those sea grass beds are affected by what sea cucumbers do. Thus, even if hypothetically, sea cucumbers were not directly relevant to fisheries or related activity-their indirect presence would still be important.


Managing Sea Cucumbers is a Challenge
So, we know they are important. Wouldn't raising them in farms be easy? How could something that looks like a giant dirt-eating log possibly be complicated?

As it turns out, we know very little about sea cucumber life cycles and on top of that all of the conventional means and assumptions that biologists use to study normal fish are not always effective.

For example, its quite difficult to actually tell how old a sea cucumber is. Growth rates can be variable and in fact, adults can shrink in size!

A common tactic-tagging juvenile fish to observe as they grow to adults-is often ineffective in sea cucumbers owing to their soft-bodies.

And finally, reproduction and replacement of the population is thought to be a complicated business in sea cucumbers. Realize that an "adult" animal may take 10 to 25 years to mature.

Reproduction in these guys is often accomplished when a significant number of OTHER individuals is either nearby or perceived by the animal as being nearby. Perhaps triggering this sort of behavior where ALL of the individuals simultaneously release their eggs and sperm!

A rash fishing expedition could conceivably wipe out a local population of sea cucumbers pretty decisively.

Fisheries Status. How bad is it? Purcell et al's Figure 2 lays out the status of fisheries around the world in this nice color graph with red indicating where the stocks of sea cucumbers have collapsed. It was not encouraging..

The authors describe the situation:

Who Fishes for Sea Cucumbers?An important dynamic to understanding the sea cucumber fishery is to look at WHO fishes for sea cucumbers ! Some factoids:
Fishing for Sea Cucumbers is something that is performed by a wide range of individuals ranging from women and children to more sophisiticated fishing outfits.

Here is a video that illustrates some of the practices..

The cucumbers processed and then are sold to higher level dealers who then export the materials from the home country typically to Asia.

Some 2 million individuals have been engaged in collecting sea cucumbers from 39 of the 77 fisheries that were examined! The authors estimate that some 3 MILLION people collect sea cucumbers worldwide-either full or part time.

Among the countries with the highest number of individuals fishing were:
What the Future Holds
The authors state in their Discussion:

Many sea cucumber species face a high risk of extinction through overfishing coupled with inherent biological and ecological vulnerability.

Apart from an unlikely reduction in demand from Chinese consumers, we believe that sustainability and resilience of troubled sea cucumber fisheries will only come from the adoption of radically different approaches to management.

The authors also emphasize that regulation and ultimately enforcement are among the most important tools that can be applied to the sea cucumber fishery.

It was also worth noting that sea cucumber fisheries were heavily relied upon in low-income countries for "poverty reduction and/or subsistence diets".

Purcell et al.'s data showed that these countries tended to experience overfishing MUCH more than those in high-income countries.

This has led the authors to hypothesize that the crash of these fisheries is likely a confluence of:
1. ease of sea cucumber collection
2. and biological and ecological vulnerability (growth, reproduction, etc.)

So...the future for sea cucumber fisheries seems bleak But Purcell et al remained insistent that management and especially INVOLVEMENT was crucial to the ongoing maintenance of sea cucumbers as a fishery...