The Anus as a Second Mouth! A Sea Cucumber that feeds via its butt!

This year it will be FIVE years since I began the Echinoblog in 2008. I always used to worry about having new topics to write about-but I'm quite happy to say that I've yet to run out of fantastic images or new discoveries to be shared.

Today is a good case in point. A GREAT new story from the journal Invertebrate Biology (go here) by two of my favorite colleagues, Will Jaeckle at the Illinois Wesleyan University and Richard Strathmann at Friday Harbor Laboratories in Washington.. a NEW paper that MUST be shared!
This week, Echinoblog brings you:
A sea cucumber that feeds not just using its mouth but ALSO via its butt!!

First, Let's look at some basics...
Jaeckle and Strathmann were studying the Pacific Northwest species Parastichopus californicus-the handsome fellow pictured above (and below)!  These occur along the west coast of North America in relatively shallow water...
Here is the primary way that sea cucumbers feed-by using the feeding tentacles surrounding their mouth to ingest tiny food particles or sediment.. as such..
As it turns out, sea cucumbers (and many other invertebrates) use their anus as an opening for pumping water in and out of their bodies!
This whole water pumping into and out of the mouth/anus thing is actually pretty common- a bunch of worms, crustaceans and other echinoderms perform this same thing.

As a generaltiy-sea cucumbers can pump quite a bit of water in and out through their anus-with tropical species measured between 40 to 860 milliliters/hour..that translates to about 3.6 to 4 cups of water per hour!

Sea cucumbers are essentially a big fleshy tube with a mouth and a butt that pumps water through itself!  Here's the basic anatomy below...

Note those two bluish/white, feathery branches that come off the cloaca and the anus... those are called the respiratory trees.  That is where water enters via the anus and is used to respire or "breathe". The cloaca has muscles that PUMP the water in!

Here's an actual pictures of these below from Jaeckle and Strathmann's paper (Fig. 1)
Note that one branch of these structures 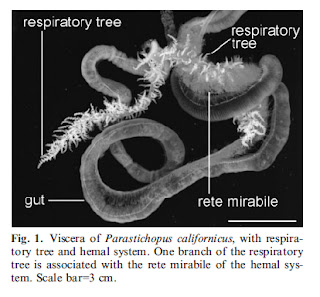 Water enters through the anus and is pumped via the cloaca (and the cloacal muscles) into the respiratory trees (=long tubes with lots of branches), where there is gas exchange or "breathing".

Note the structure labelled rete mirabile, which is a network of blood vessels which interaces with the gut. That will be important later on!

There's a LOT of water that flows through these areas, so conceivably, could these be used for ANOTHER purpose?  Such as.... feeding?

Jaeckle and Strathmann set to find out!  They used biological tracers such as the isotope Carbon-14 which they applied to various algae cells and other nutrients that were added to seawater.

Evidence for the Anus as a Second Mouth!
Folllowing the trail of traced algae through the sea cucumber, Jaeckle and Strathmann tracked the isotopes throughout the body and found out where they were most abundant.

Enter The Rete Mirabile! (this sounds like a great episode of Star Trek doesn't it?) Basically after exposing the sea cucumber to tagged algae they found the tags taken in and were present in highest abundance in the Rete Mirabile which connects the respiratory trees with the gut..

This supports the notion that organic food is drawn in from the respiratory trees and eventually transferred to the gut..
They looked at specific tissue cross-section of the inside of the respiratory trees. Lo and behold the blue bits in the picture reveal that they are inside and being absorbed! 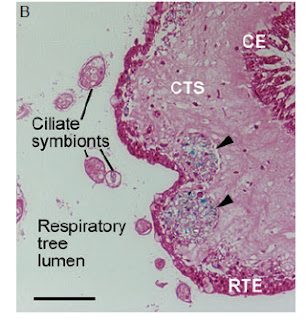 On top of everything else, histology of the INSIDE of the respiratory trees shows internal tissues that you might expect to find in a gut: such as microvilli (tiny finger like doodahs that serve to absorb or secrete. We have these in our intestine) as well as certain kinds of cells in the stomach lining that are recognized in other animals for digesting food.

Note above that they also found tiny ciliates (protozoans) swimming around inside living commensally. ANOTHER feature common to spaces where food is digested.
It had been suggested before that the respiratory trees were used only for respiration/breathing.

In other words:  They use their anus as a SECOND MOUTH!

This phenomena is what the authors term "Bipolar Feeding"

To be sure, its not likely that this means of feeding is as substantial as its primary feeding mode (taking organic materials from sediment or from the bottoms via the mouth) but it does appear to be significant. Also, obtaining food in this way may be an important way to supplement its main feeding mode.

Perhaps the sea cucumber version of an  apéritif with dinner?

How does this fit into the "Big Picture"??
At first glance, all of this sounds more like just weird butt stuff..
But let's remember that this mode of feeding is probably present in a LOT of sea cucumbers, which are ecologically important. Such as this post about tropical sea cucumbers being important to sea grass ecology.   And bear in mind that nutrient cycling is an important consideration these days. A LOT more nutrients go INTO sea cucumbers than perhaps was realized.

Another indicator of how echinoderms might be the ecological "canaries in the coal mine" perhaps?

Information like this may seem like an unusual natural history factoid but conceivably things like this can ultimately be VERY important to the big picture...
Posted by ChrisM at 5:44 AM

Hah the cucumber isn't doing anything we can't do. LOL

In the early days of modern medicine, during war time, one thing physicians devised to help patients with wounds involving their digestive system to survive was butt feeding (seriously).

Ill patients would be given a nutrient loaded enema and told to hold it. In doing so, they'd give their body time to absorb the liquid nutrition they needed to get better.

As practical and easy as this was, culturally it was disgusting of course, and as soon as medicine made the necessary advances to ensure intravenous feeding didn't cause infections it was abandoned.