A Big Deal over a Little Starfish: The Leptasterias Species Complex!!

Ah Spring! As the sun emerges and the tides on the west coast go out, so also the many marine biology students! And so too come the many welcome questions!! 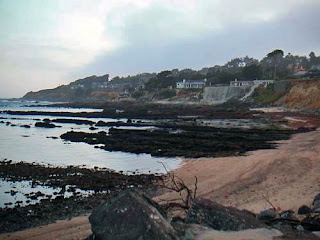 One of the more common questions I've been getting recently has been about this little six-rayed starfish called Leptasterias..... 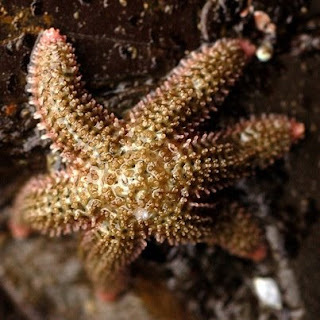 Its commonly found and is quite a resplendent little animal (in California only about 1-2 cm across).

Leptasterias is quite widespread, extending from the North Atlantic through the Arctic to the cold-temperate North Pacific (Alaska to Southern California). The species in California are nearly always SIX rayed, but the ones in the Arctic and the Atlantic are often five rayed. They are often found to brood eggs and juveniles (but this is a story for another day).

The name "leptos" (in Leptasterias) refers to the Greek for "small, delicate or thin" (with asterias meaning star) alluding to the small, delicate size that many Leptasterias spp. are known for (although some Arctic species can be quite large!)

Leptasterias is a great example of how evolution is both a vexing puzzle and fascinating conundrum for the interested biologist. How can something that is so well known, and play such an important role in our understanding of marine ecology ALSO be so evasive that we don't even know what to call it???

Species in this genus form what is called a species complex. Here is a convenient definition from Wikipedia:


a group of species which satisfy the biological definition of species, that is, they are reproductively isolated from each other, but their morphology is very similar (in some cases virtually identical).

Put another way, this could be interpreted as sort of a "snapshot of evolution" in the works...There is such subtle divergence among closely related species that they we can barely tell them apart!!

Since the late 19th and early 20th Century, scientists, such as pre-eminent starfish biologist Walter K. Fisher at Hopkins Marine Station, have recognized the difficult lines between species along the west coast of North America. 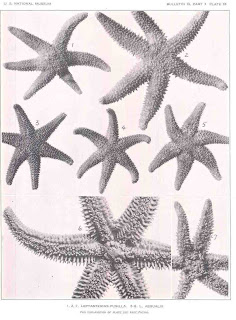 Figurin' It Out...
In the mid 90s, David Foltz, a population geneticist (and colleague) at Louisiana State University in Baton Rouge and student Jon Flowers got involved with the Leptasterias questions and he applied a variety of allozyme and later molecular tools towards the many species of Leptasterias and its near kin. 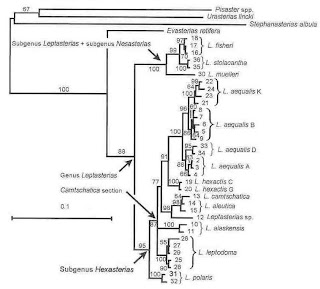 Results can be found in a great many of his papers including this one, this one and this one.

They sampled primarily from Alaska to California and discovered several different lineages of Leptasterias...especially in California where they identified 6 apparently distinct cryptic species in Leptasterias "hexactis" and "aequalis"!!! 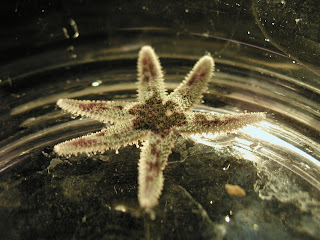 So, what do you call these?

Right now, this is a pretty tricky question which I typically answer as good news/bad news.

What's the bad news? We are only at the first step. What comes next is the 'synch' up between the molecular /DNA characterisation of the species in Leptasterias AND the taxonomy.
What's the good news? We have a good idea what's going on and it seems pretty clear about what will need to be done.

So, the issue is NOT that the taxonomy itself is hopelessly confused (altho it IS very complicated) but that it just hasn't caught up with some of the more.... formal nomenclatural "loose ends"...Give it time!

Believe it or not, Leptasterias isn't the "worst" species complex problem/question known out there... (either on the west coast of North America or the world....)!!!
Posted by ChrisM at 3:09 PM

Wow that is really neat!