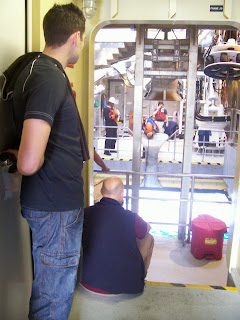 So, when last we left off...the ROV Doc Ricketts had been deployed into the depths! We did this almost EVERY day we were out. 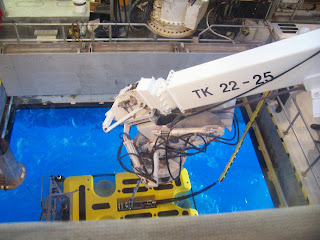 We were pretty much on track with the expedition for the first half of the dive. Got to see several of the targeted northern seamounts- CoAxial, and North Cleft...but weather out there can be tricky and we ended up moving south to President Jackson and then gradually down to the Northern Escanaba Trough (called NESCA) and then eventually a final day at Pioneer Seamount close to the California coast. 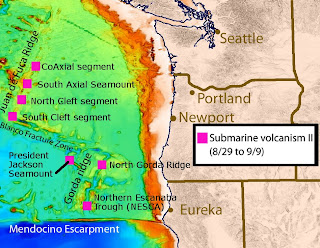 Most everyone, then focused their attention on the dive depending on what the priorities for the diver were that day. 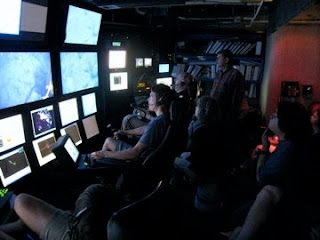 
The ROV control room becomes THE Place to be during these dives and if you had any kind of science being done, it was usually in your best interest to be there for the whole duration. You can see me there on the right with my left hand on my chin.

The control room is a clean dark room with lots of big "super villain base control room" type hi-resolution plasma TV screens showing input from about a dozen different cameras located on the Doc Ricketts IN addition to the control monitors (many with touch-screen controls!), various control panels, joysticks, video monitors, video recording devices, and so forth.

Among the control room amenities: very comfortable First Class airplane type chairs in the back, a comfy rug, lights off during operation, and is LITERALLY the coolest place on the ship (because the AC needs to be on) when everything is go.


So, what do you see? A lot of stuff like this: 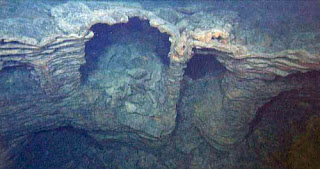 And one amazing sponge after another! 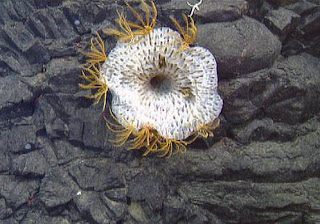 (crinoids on a "goiter" sponge from the MBARI expedition log)

Shown here: When I was around..we observed and collected deep-sea starfish, such as this very large and gelatinous Hymenaster (which I will talk more about later this week-but if you are impatient-you can see the write up I wrote on the MBARI expedition log) 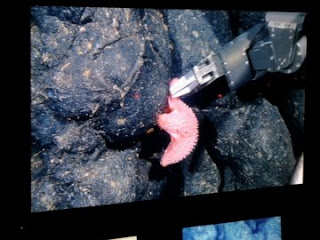 Some of my colleagues had the dazzling sense to actually take pictures of the video screen shots as they were happening!

The ROV pilots used one of about 3 different devices-two mechanical arms, and a suction sampler to collect stuff onto the submersible. 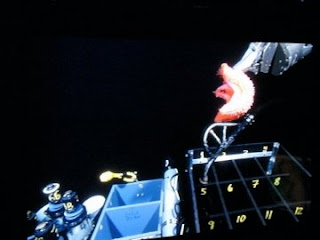 I'll tell ya' the truth though. NO one can sit in a completely dark room full of TVs for 10 hours straight. Especially when you've got a lot of days that look like this outside: 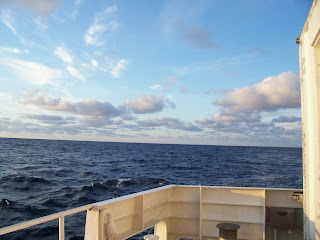 ...and on some days, you actually have some company.. You can barely see it, but that was the Woods Hole Research vessel R/V Atlantis hanging off our port side aft. and also, you occasionally see dolphins, whales, mola molas, etc. 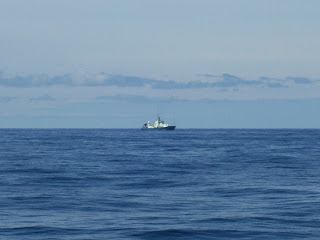 But ultimately, you don't NEED to be in the ROV control room all day.
Sometimes they do "geology" when you do "biology" or othertimes, they just have other stuff going on..But you're out in the middle of the North Pacific with nary a shopping mall in sight!

So what other stuff do you do?

1. Relax. There's always just crashing in your bunk in your very cozy stateroom. This was especially popular the first few days when motion sickness was still pretty common. 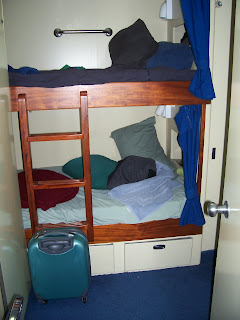 2. The laundry. The Western Flyer had state of the art laundering technology available! I used them a bunch of times! 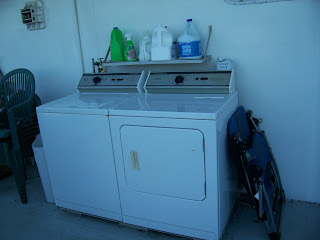 3. EAT! One of the most important personnel on the ship was Patrick, the steward (who is also trained as a fully trained Marine Geologist). One of the smarter personnel who found a creative way to get out to sea to observe cool rocks! Patrick kept breakfast, lunch and dinner ready on time every day. I've yet to be on a research vessel that didn't have above average day to day meals and MBARI did NOT disappoint... 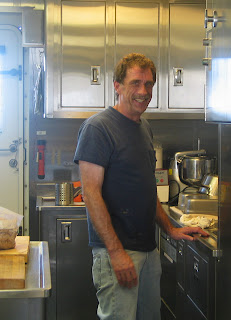 4. WORK!
You could still get internet uploaded twice a day, image files to organize, and all sorts of other work that needed to be done. There's a designated workspace for everyone to be busy... 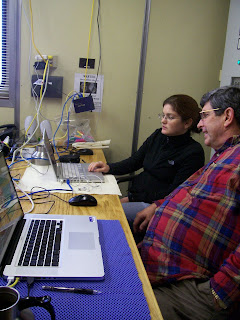 Above we see Dr. Dave Clague, chief scientist conferring with Gillian-one of the biology team specialists! 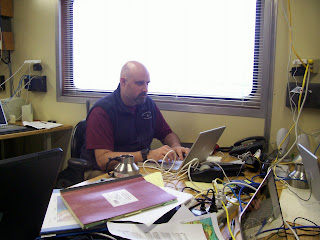 and here is Dr. Craig McLain, writer of Deep-Sea news, here working on stuff!! blogging? writing mission reports? Power Point presentation? Craig worked so hard on this cruise I got tired of watching him after the first day!

...and then the ROV Comes back!! After letting the submersible pilots strap down and secure the ROV, the science teams head over to the storage compartments to inventory and take care of the rock and animal specimens collected on the trip. 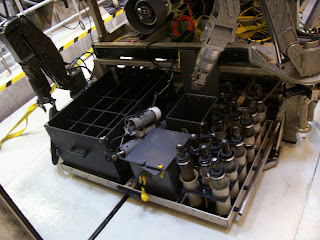 The big box on the left is largely used for rock storage. The two boxes in the middle-for storing animals...and the cylinders on the right are push-cores which were used for taking sediment samples and anything that happened to be sitting on them... There's also further storage that are out of view that will swing around on command and large bottles that are connected to the suction sampler. Suffice it to say...if you're down at 3000 meters for 10 hours you collect a LOT of stuff.. Here we see Chief Scientist Dave Clague recovering rock samples from the rock storage box.... 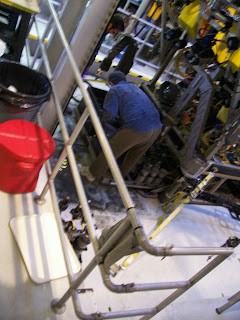 By the time the ROV has returned, everyone knows it-and the science teams for both Biology and Geology are convened in the lab in order to prepare for processing... 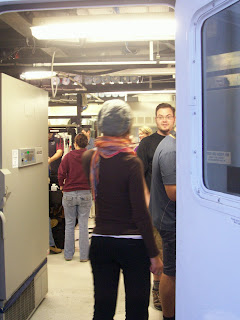 This includes biological samples-animal specimens. Shown being handled by MBARI technician Linda Kuhnz, a woman whom I have come to respect as having seen MORE Rathbunaster californicus (a deep-sea starfish from Monterey Bay) video then probably ANY single living person (myself included). 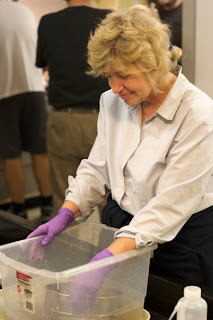 
...and a stalked crinoid sample being processed by Dr. Julio Harvey and the aforementioned Gillian 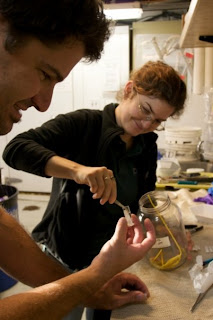 
and of course photos of me and Dr. Harvey discussing sciencey stuff while I look over some starfish at the dissecting scope... 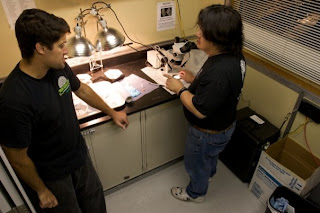 (Photo courtesy of the very talented Bernard Roth)
Meanwhile, the Geology team breaks down the sediment cores recovered on the cruise... 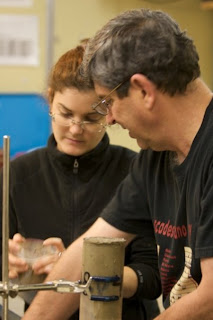 
and looks at rock samples recovered from the volcanic rock formations observed on the cruise! Many of which had critters living on them! 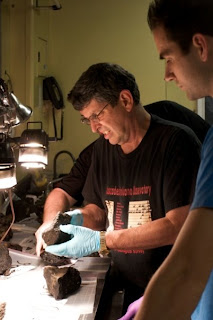 
Processing is always a pretty intense process, often taking several hours to get everything completely done, even with everyone involved.
....Later this week: We wrap up with more rocks and some STARFISH!!
Posted by ChrisM at 9:35 PM

That yellow CRINOID was amazing! I know this had to be an incredible experience! Thanks for sharing!