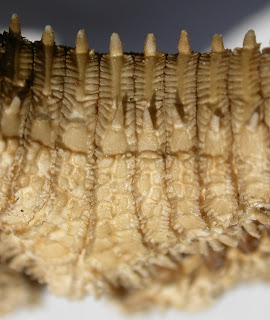 So, everyone knows that various animals (and other living things) have adaptations to where they live. And certainly, many if not ALL of the various things I describe on the Echinoblog are an ongoing story of how these unique animals have evolved to deal with the environments they live in.

What's always curious is that echinoderms evolve in strange ways, which is what makes them so cool! Sometimes, there are such clear cases of HOW critters have such specific adaptations to living in certain habitats that its pretty amazing.

One case in point? The "Mud Star" Ctenodiscus crispatus ! (along with sister species C. australis and C. procurator) 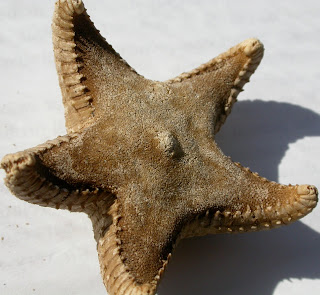 Ctenodiscus lives primarily in MUD , mostly on continental shelves around the world. It is WIDELY distributed in the Arctic and subArctic as well as the subAntarctic and cold-water regions adjacent to these areas.

As you can see, where they occur, they are present in huge abundance. Single collections have resulted in hundreds of individuals! 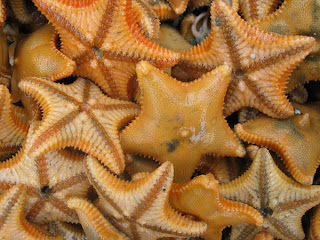 That means that it lives in cold water regions almost ALL over the world. If that's not an evolutionary sucess story, then I don't know what is.

So, let's break it down...
Two of the important things that starfish need: They need FOOD. And they need to BREATHE.The material for this blog is taken from work by Malcolm Shick here and here.


1. Ctenodiscus is an non-selective deposit feeder. 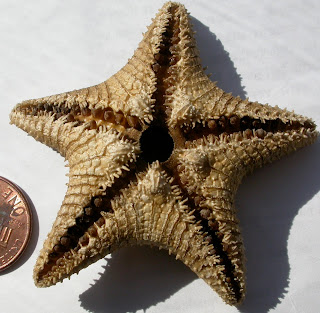 Simply put, they open their mouth and put ALL the mud in it. They get all sorts of sediment with good organic goo out of it, as its slowly digested and processed. 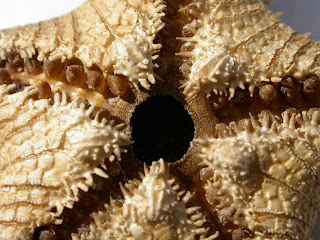 The animal is often found GORGED with mud filling the entire disk. 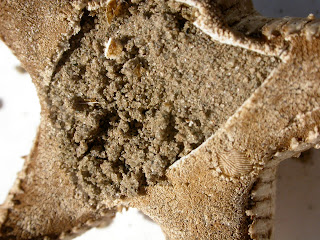 2. The Real Story: HOW Ctenodiscus BREATHES.
So, here's where the COOL stuff starts. HOW does a starfish BURIED in mud get WATER so that it can exchange gases over the body surface and BREATHE?? 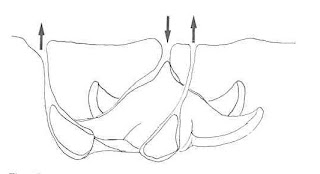 How does the water current flow???

The body surface of starfish (and other echinoderms) are COVERED by a very thin ciliated skin. Cilia are tiny, microscopic, hair-like structures that cover the surface and when they beat, they can create a current flow over the body.

So, that is what happens normally in ALL echinoderms. How does THIS species, which lives buried in mud, create such a STRONG current that it actually can circulate water over its body surface??
It has TURBINES!!! 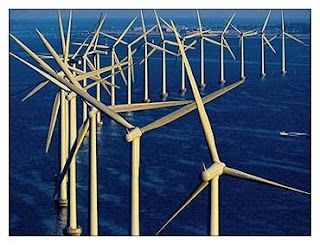 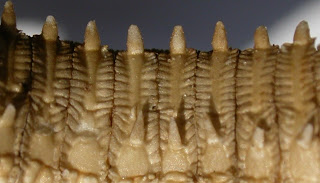 See these horizontal and lateral channels between the spines? Those are special structures known as CRIBIFORM ORGANS. These channels lead into deeper channels that are further divided into pockets-ALL covered internally with cilia. 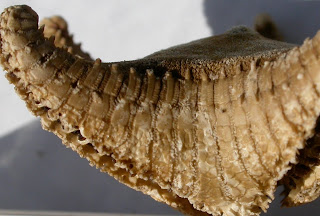 These cilia beat, creating a current that flows through these channels around the animal and over the papulae (i.e., the gills) so that Ctenodiscus is properly aerated. 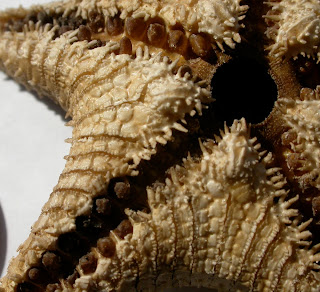 BREATHING in MUD? But what happens when there's NO OXYGEN??
Where you've got mud, you sometimes get a condition called hypoxia. That's when the oxygen just doesn't reach a certain level of the sediment and you see a build up of a toxic chemical called hydrogen sulfide. That' that level of mud that turns black. 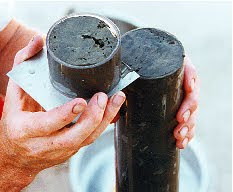 Ctenodiscus has a high tolerance to hypoxia, possibly one of the best known for any echinoderm (but there isn't much known about other taxa). 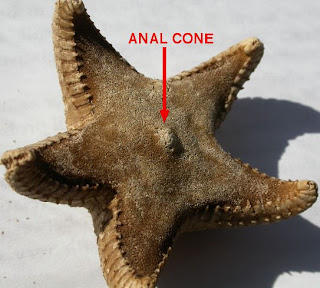 The cone is basically an outpocket of the body. Its extended UPWARDS through the sediment. 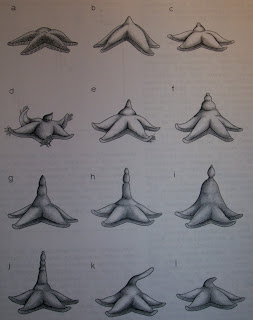 (Fig. 2 from Shick 1976)
Observations of Ctenodiscus under hypoxic conditions led to the illustration above. Basically, its thought that the cone gets more enlarged as hypoxia and hydrogen sulfide increases.

The extension of the cone extends through the surface, with the tip at the surface. For your typical 6.0 cm diameter animal, these animals can have a cone that can attain 3 to 4 cm and extend 2 to 3 cm above the mud. It can leave this extended for over an hour. As the picture suggests, it can move around and push through sediment as the mud shifts, and etc. So, it can move around.

This also serves to make the top surface of the animal thinner, allowing easier gas exchange and opening up a channel to the surface water above the sediment surface!!

MYSTERIES of the mud stars revealed!! Success comes in many forms!
Posted by ChrisM at 2:53 PM

I find it quite curious that, despite highly similar morphology and niche, Ctenodiscus and Porcellanasterids aren't grouped into one family. Is this still the norm, or has it changed?

(Personally, I think it will be nice to discuss why some species of genus Styracaster have such thin, long arms with prominent carinal spines)

Yes. They are still separated. This is from an old tradition of distinctions based on differences rather then shared characters.

Changes to the classification are coming-but many of these groupings have been stable for a LONG while and are likely to remain so given the historical inertia that sits behind some of them..

A really fascinating species, thanks for compiling all this information!

This information answered the questions my grandson had about mud stars,
Thanks,
Jo