Cloning As Sand Dollar DEFENSE! Why run & hide when you can divide? 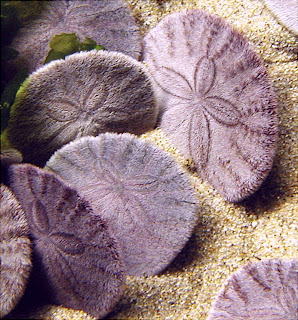 Today, a little somethin' somethin' about a familiar animal..but not quite the way, you're used to thinking about it.. Today's post is based on a new, interesting paper by Dawn Vaughn who is one of the many smart people at Friday Harbor Laboratories! This paper was in issue 157 of Marine Biology of this year (click here!).

Our subject is the familiar sea urchin-the Pacific Sand Dollar, Dendraster excentricus! Here is a good intro page. You can see pictures of the animal alive above..but here is how most people are accustomed to discovering it.. 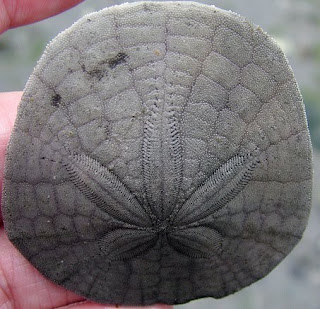 Dendraster is a sea urchin-admittedly a very WEIRD sea urchin. and like all sea urchins (and indeed all echinoderms), the adult forms grow from a small larval stage that is so tiny, this asterisk * is probably slightly larger.

A sea urchin larvae is called a pluteus (plural-plutei)..specifically an echinopluteus (for sea urchins). 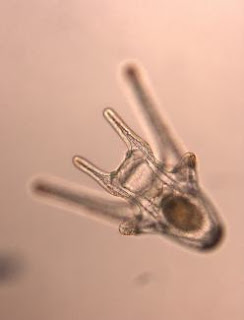 (Image borrowed from the Cephalopodiatrist!)

This larval stage floats in the sea before settling down and makes up part of the plankton. So, it was discovered some years ago, that these larvae can be in the water column for quite a LONG time. Months, possibly years. This can be important in the development of the adult..as we'll see..
These can often be food for other creatures that live in the ecosystem at about the same time.. Often, the larvae that float become FOOD for other organisms, such as crustaceans and fish.

Recently though, larval life has been thought of as kind of an added "secret" life and are capable of doing much more then simply floating around, waiting to be eaten or becoming adults.
It turns out that SOME echinoderm larvae, sea stars and sea urchins (probably others) can actually CLONE themselves. That is to say, they can "reproduce" asexually when they are larvae. (Adult sand dollars cannot divide in half and clone themselves in the same way..)

But WHAT would the evolutionary significance of this action/behavior be??? How does it help the animal survive?

In some studies, echinoderm larvae clone themselves when times are good. Food is prime and temperature is ideal.

But what happens we investigate cloning in the context of hostile or high-risk environments???

There are obvious advantages to being able to clone oneself in the face of danger from predators, such as safety in numbers and so on.

To investigate these questions Vaughn set up an interesting experiment.

They cultured the plutei from Dendraster excentricus and cleverly created an experiment that simulated the presence of different, local fish species in the environment!

How did they do that? They isolated and concentrated the fish MUCUS from 2 different species-the stickleback (above) and Dover sole (Microstomus pacificus).

One of the groups was a "control" group-i.e., fish were not encouraged to attack, whereas the other group had mucus introduced as the "hostile" environmental factor. 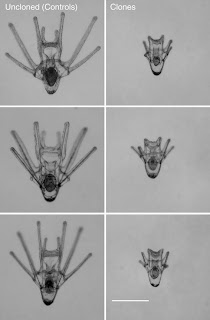 Vaughn found that all of the larvae left in the control (without fish mucus to "threaten" them) were much fewer and much LARGER. Mucus-treated larvae INCREASED in numbers and DECREASED in SIZE over the duration of the experiment.

Figure 2 above shows a nice scale comparison of plutei from the Uncloned versus Cloned subjects.

Vaughn also performed trials where they looked at direct effect that fish attacks would have on the larvae.

So, the rather strongly suggests that being able to clone oneself (thus creating MORE and SMALLER) individuals is an adaptive defense. (I suppose that's kind of a bummer if you're one of those larger larvae that get eaten though!)

Bear in mind the time scales here also... The asexual cloning doesn't work on an individual-individual instant scale..i.e., fish approaches and larvae splits. But when the fish leaves a mucous presence in the area..it presumably sets all of the larvae on alert to begin cloning themselves.

This can have a potentially important evolutionary and ecological effect. The presence of more larvae suggests that more fish could be present. Is escalation present? What is the effect of having these cloned larvae on the variation and evolution of the adults? 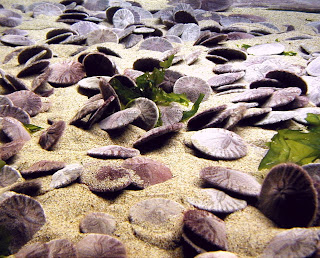 Wow! Cloning sand dollars! I feel so much smarter now. Thanks for making the data easy for us lay-persons to understand.

Wow I never knew that sea urchins begin in a larval stage. Great pictures too!

Thank you for the great article! I had recently heard about them cloning, and wanted to know more. I was thrilled to be able to see all the photographs

I liked the article but if you can, can you get a picture of a sand dollar cloning?