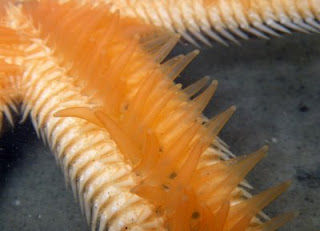 (from the Team Seagrass Site!)

Today: something a bit different. I thought that I would share a little bit about the details of a classic scientific debate among starfish scientists! What do we discuss? What sorts of topics are important?

Probably one of the most long-standing debates among scientists who study sea stars has been to understand the evolutionary relationships between those species living today and those which preceded them. 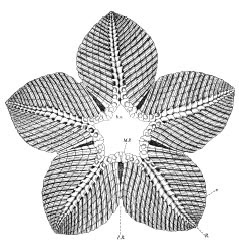 (Villebrunaster from the TOL site)
So, in the early 20th Century-many thoughts about starfish classification were also about evolution.

Which starfish would go at the "bottom" of the classification? (i.e., the oldest at bottom vs. youngest at top) What were the ancestors to those species living in the recent?

In the 1920s, opinions and DEBATE flared up as a heated exchange in the pages of the journal Nature between several of the most prominent workers of the day.

The participants in this discussion? Primarily it was between Professor E.W. MacBride (not shown) from the Royal College of Science in London and Dr. Theodore Mortensen at the Zoological Museum in Copenhagen (below)... 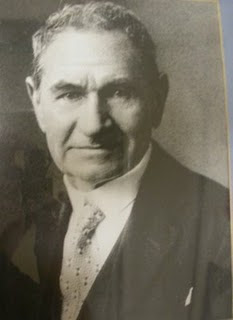 Originally, the discussion focused on the family Astropectinidae, which includes sea stars, such as this Astropecten, that burrow into sand, mud and other unconsolidated sediment like this..

But the discussion was later extended to other related members of the Paxillosida. An example is this related Mud Star (Ctenodiscus) here...

What are they fightin' about?
Astropectinids and their relatives in the larger order Paxillosida have a number of unqiue characteristics that suggested different evolutionary hypotheses to each of the two scientists. Simply put- Basal? or Ancestral? (i.e., "primtive" even though this term is not really accurate))

The Paxillosida is so-called because of the presence of structures called paxillae. 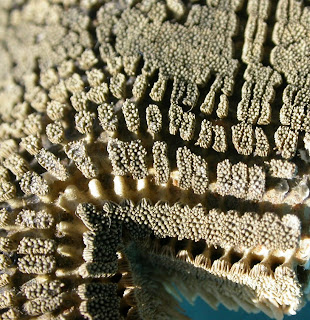 Paxillae provide a kind of surface protection above the papulae (i.e., the gills) which are present on the surface of the animal.

Mud and sand can cover over the paxillae but they don't clog up the papulae so that the animal can breathe... 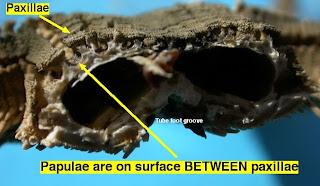 Living in and around sediment-and SWALLOWING mud is often part of these' animals' repetoire! 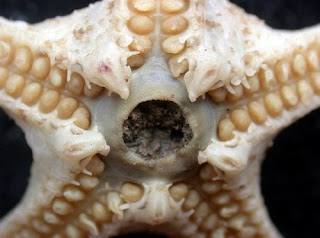 Many Paxillosidans are voracious predators. You can see some of their eating habits documented here.

Mortensen (and indeed many of the other scientists of his day) interpreted many of the characters in this group as evidence that the group was more "primitive" (i.e., closer to a fossil ancestor). 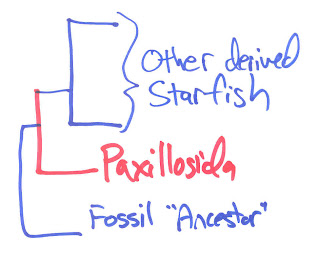 (thanks to Echinoblog Art Dept. !)

This was opposite of MacBride who interpreted those characters as more "advanced' (i.e., specialized adaptations to the particular setting or lifestyle of the animals). 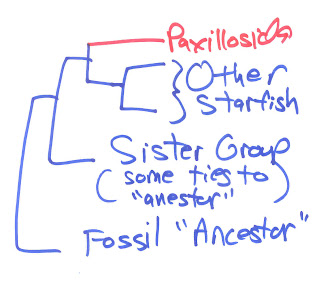 Let's see some of these characteristics-and see what the fuss was about!!

1. Absence of a brachiolaria larvae. It is common for many astropectinids (and presumably other paxillosidans-although data for all taxa isn't completely known) to LACK this one larval stage. 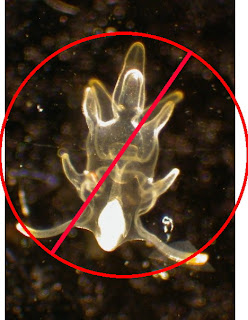 Mortensen and those who interpret this as a "primitve" or ancestral character would argue that the absence of this larval stage indicates that it is acquired later on by the OTHER starfish taxa.
And that this larvae was presumably NOT present in the ancestor of modern sea stars.

MacBride on the other hand argued that this was more evolved-i.e., a "lost" character as a result of specific modification. Presumably, an adaptation to the muddy/sandy/ sedimenty places that these starfish like to live.

2. Pointed Tube feet (or absence of suckers). Understanding of tube feet in starfish is actually a big deal with many isues pertaing to adhesion and so forth.. This interest continues to be a fairly active area of study.

Mortensen (and the belief of many) was that it was "primitive" to NOT have suckers on your tube feet in contrast to the -the way that most other starfish have. i.e., having suckers made you the more evolutionary sophisticated versus those without suckers. 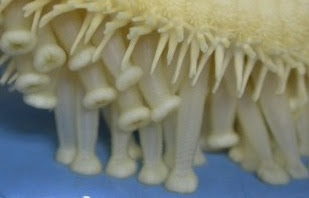 A point in MacBride's side has been that It turns out that SEM and subsequent work of tube feet shows that in the paxillosidans-these tube feet are actually pointed and not simply "suckerless".

It also turns out that in some Astropecten, there is a suckered tube foot present but only in juveniles.. So it does seem that the "pointed" tube feet develop and then give way to a the pointed tube feet in adults.

3. And finally... in the astropectinids surveyed-the ANUS was absent! And so the argument came down to the same back and forth: Was it missing because it was never there in the first place? (to be acquired by other sea stars later on?)

Or because it was "lost" over time as an adaptation to the environment?

And so it goes...
The discussion/debates over the Paxillosida began in the 1920s and have been an ongoing part of the study of starfish evolution ever since..

The positions of MacBride and Mortensen have found new advocates and the discussion has itself evolved through the many different generations of biological thought-fossils had always been important-but have become a critical part of the discussion in the 1960s and 70s.

The 1980s and 90s saw the phylogenetic revolution and the application of cladistics to the issue. And the discussion continued.

Many of these are interesting stories in their own right..but for now-I am glossing over them and maybe someday I will be able to detail some of those accounts..

At this point, I had found that many of the cladistic and phylogenetic discussions advocating the Paxillosida as derived or "advanced" rather than primtive to be the one best supported by the evidence.

Enter DNA...
What do I bring to this discussion? A few years ago, myself and my colleague Dr. David Foltz at Louisiana State University at Baton Rouge began to work on this question-collecting from the huge diversity of starfish, extracting DNA from them and producing a "family" or phylogenetic tree of modern sea stars.

Part of this tree was recently published by the Zoological Journal of the Linnean Society.. and our tree shows some interesting results...

Now, keep in mind that for various reasons, we did not actually arrive at a solid answer of "what is the ancestral starfish".

Often times, these trees are heavily influenced by many parameters-how many different kinds of starfish are included, the kinds of genetic data used and how much genetic data were included.

That said-this is also one of the most comprehensive DNA trees for starfish that are currently available..

And what you see is that the basal taxa are in yell0w-the Forcipulatacea and the Velatida whereas lodged up in the higher branches (see red box at bottom) : The Paxillosida!

Also interesting-is that nearly all of the taxa that showed adaptations for burrowing were supported among the Paxillosida... 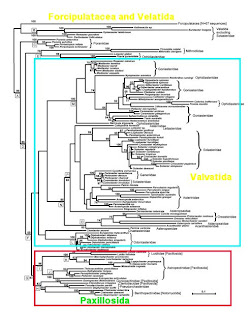 The tree above has also changed a lot of the underlying assumptions about many of the relationships among sea stars. The Velatida had not previously been thought of as being near the base of the tree. So many new angles have been brought into the discussion!

Now, I know for a fact that a new (non-DNA) paper that challenges this is in the pipe! How will this new data conflict or agree with the tree indicated above?

Would you consider Somasteroidea as being more related to Paxillosids than any other sea stars? If possible, what's the evidence to support that hypothesis? I think this is a very interesting discussion since there's not a single true somasteroid surviving into today's oceans.