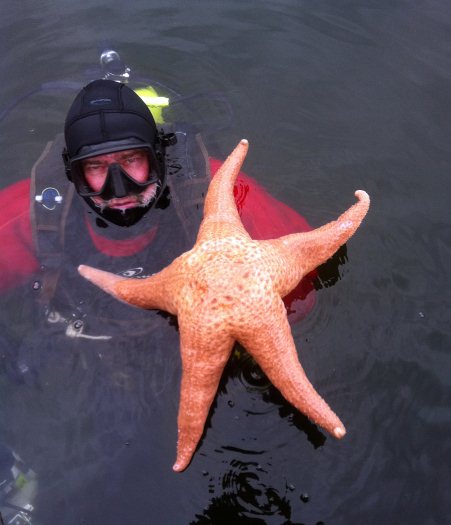 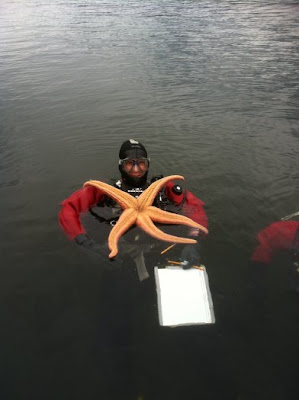 (From April 2011)
About a week ago Mr. Jim V. of Elma, Washington sent me this pic of a MASSIVE specimen of Pisaster brevispinus-the Giant Pink Sea Star which he collected in a crab net with his sons Josiah and Dylan. (dated April 11, 2011) 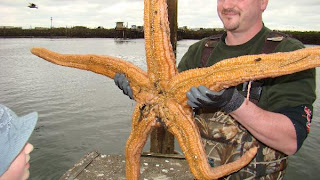 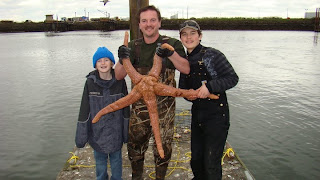 (images courtesy of Mr. Volz and from King5.com)

So definitely sizeable but until we get exact measurements-its not clear to me if this was larger than the one from BC below, still pretty cool. Based on its feeding biology, it must have some VERY crazy long tube feet!!

The animal was donated to the Westport Aquarium. Here's the account from the local Washington news.

The unusual feeding biology of Pisaster brevispinus can be found here. 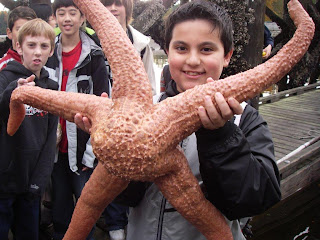 (photo by Ruth Foster, Pacific Wild Life Foundation-click and go find out what they're about!)

From Neil McDaniel! This gigantic specimen of Pisaster brevispinus measured a freakkin 3.2 feet across in diameter!! (99 cm) From Inner Vancouver Harbor in British Columbia.

It is conceivably one of the largest individuals of this species recorded. Do you have a bigger specimen?? Take a pic and I'll feature it on the Echinoblog!! (but please don't harm the animal!)

The beast was returned to the wild after being photographed...

The unusual feeding biology of Pisaster brevispinus can be found here.

It will be a busy week. LOTS to blog about! More soon!
Posted by ChrisM at 4:36 PM