Sizes and Species in the Strangest of the Strange! Deep-Sea Pourtalesiid Urchins!

Let's get into some WEIRD today, shall we?

Now, all echinoderms have some kind of unsuual stuff going on-but honestly, how many of them can you look at the shape and ask "Whoa. HOW is THAT thing even ALIVE???" 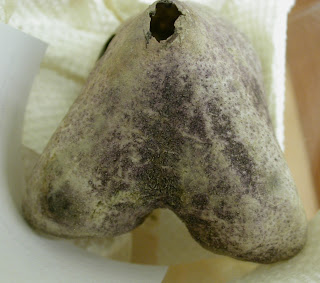 (get your mind out of the gutter-this doesn't look like that AT ALL!)

This and all of the urchins in this post are sea urchins in the family Pourtalesiidae. These odd sea urchins are found all over the world but only in the deepest of the abyssal seas, usually over 1000 meters (although some occur in less than a 1000 m depth) but several, such as the above Echinocrepis, can occur between 3000 to 5000 m!

There are a number of rather dramatic changes in the body of these urchins-almost seemingly unrecognizable when compared to their more commonly encountered shallow-water cousins...

In your typical urchin-you have the anus on top, mouth on bottom. Most of these have big spines and feed on algae and etc. in relatively shallow water. 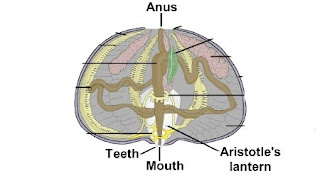 But then WHAMMO!! You get a weirdo like Echinosigra here... 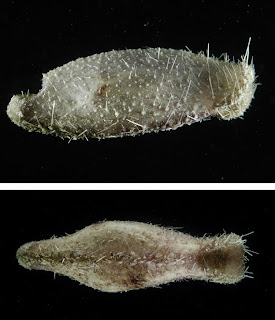 And you get some changes from the typical round urchins-and you start asking questions like what end is the front?
a. Its smaller and has MANY strange shapes (see below).
b. The physical thickness of the test has become SO thin and SO delicate that in the air its
actually FRAGILE and can crumble easily to the touch! 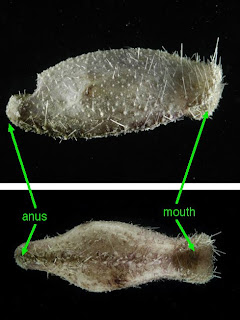 Here's a nice spread of the genera (courtesy of the British Museum's Echinoid Database).. As you can see...some of them look like bottles or swollen pieces of fruit.

They almost seem to be living, round shapes rather than animals... 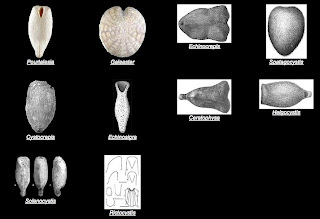 Almost all of these live by plowing through loosely consolidated deep-sea mud. Only recently have these animals been observed alive with submersibles..One example is that of Cystocrepis in Peru by David et al, 2001 who observed that them plowing through mud AND playing host to a bunch of other commensal invertebrates hanging-on!

But really, there's not a lot known about these urchins...

Its right around here though, that what we know about pourtalesiids starts to get more complicated..

So, uh, Isn't it *difficult* to work on Pourtalesiid Urchins?

You have animals that easily live in THOUSANDS of meters depth on the abyssal plain...
....are seldom encountered

The bodies of these animals are incredibly thin and fragile! Almost as if it were made of crispy paper!

For example, here is what your typical pourtalesiid urchin looks like when you pull it up in a net... 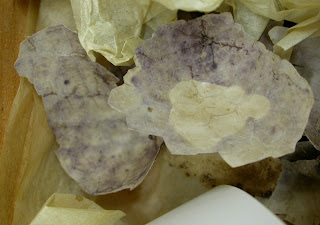 you almost have to be some kind of expert with puzzles!! 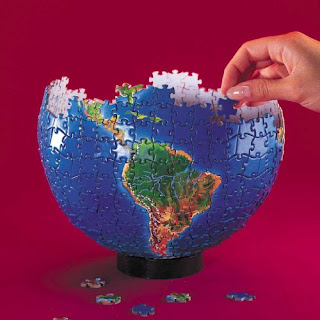 I've heard stories of many a sea urchin expert who has spent a lot of painstaking effort gluing some of these back together!

Animal Size Complicates! So you've got a weird-strangely adapted animal..but guess what makes working and recognizing them more of a challenge??

So-a baby looks different from a 15 year old versus a 50 year old vs. someone who is 90. You can see some fairly dramatic changes over this broad age range.

Now, what if you apply that amount of disparity to an animal that looks like a living coke bottle?

A study by deep-sea biologist John Gage examined a full range of sizes in the pourtalesiid Echinosigra from the Rockall Trough (1984-J. of the Marine Biol. Ass. of the UK. vol. 64: 167)

Can you believe that this thing? (identified as the species- Echinosigra paradoxa)

(photo by Bruno David-image from the BM Echinoid Database)

is actually the ADULT of this thing? (a species previously identified as E. phiale)

(from Mortensen, 1907, via the BM Echinoid Database)

Amazingly, they are the SAME SPECIES.

On the surface-they look nothing alike-but then you see the FULL transformation-size sequence from Figure 2 of Gage's paper.. 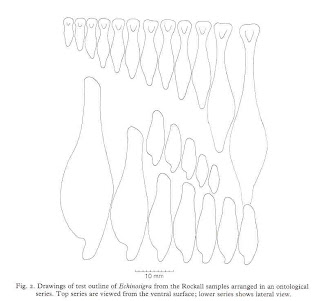 And you start to see the complete picture-and how much of it you are missing if you've only got a few specimens..

Or we can do it this way......
A different approach to the equally odd-looking pourtalesiid urchin Echinocrepis was taken in a recent paper by Michael Vardaro from the Monterey Bay Aquarium Research Institute from a new paper in Invertebrate Biology 129: 368-375

His study observed 3 different "morphotypes" that is body/color types...from left to right, showing purple (a), tan (b) and white (c) of the pourtalesiid Echinocrepis rostrata.

Here's one close up to give you a better idea of what they look like..

This is pretty much what these look like when alive (although not with the hole in the top!) and again... VERY fragile.. 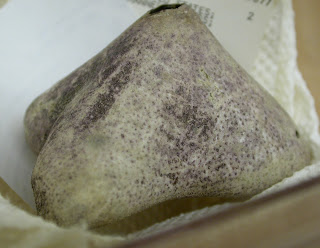 Vardaro extracted and amplified DNA from the 3 morphotypes, compared them, and found that they were all likely representatives of the same species... 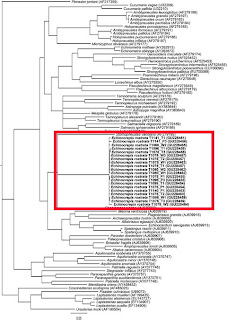 The white morphotype was consistently smaller than the others, which suggested that it was a likely juvenile..but it was not clear what was responsible for the color difference between the purple and tan variants.

These are the sorts of puzzles and mysteries that deep-sea animals make scientists a little crazy. There is a little bit of this that is like working on extraterrestrial life..

I've been reading your blog for quite a while now, and everytime you amaze me with something great! But this time it's really very, very good. I loved the read, and although I already knew a bit on Pourtalesiidae, I've learned a lot from this post. Please keep it up!

thanks! I keep on trying!

You know, seeing things like this is a bit like reading little surprises from recent taxonomic developments, such as the fact that Acanthocephalans are actually highly modified rotifers. I bet that some biologists couldn't even believe the fact that they are sea urchins.