SEXY! A large new species of Stalked Crinoid from an Antarctic Seamount! 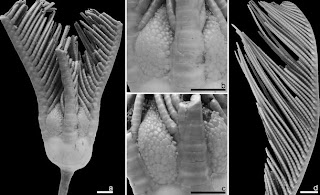 So, a little while back, I blogged about this Antarctic seamount as "The Lost World" and described an ecosystem of suspension feeders, including brittle stars, crinoids and other echinoderms.

One of the great things about surveying a new ecosystem is the discovery of novel new species!

And this ain't no tiny little critter-its a good-sized animal... just short of 2 feet in length!

A new paper by my French and New Zealand colleagues Marc Eleaume, Lenaig Hemery, Dave Bowden and Michel Roux (you can learn more most of these people here) describes a new species of stalked crinoid from Antarctic seamounts in the new issue of Polar Biology! (click here for the citation)

Marc is pictured here holding the calyx of a specimen... 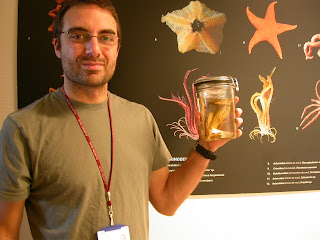 The Where
The specimens were collected from the Admiralty and Scott seamounts north of the Ross Sea, which is on the Australia/New Zealand "side" of Antarctica.

Stalked crinoids are usually pretty deep-and these are no exception. Specimens were collected from 450 to 1680 meters.

Note that this species has a stalk that cements itself to the bottom. So, they ain't goin' nowhere.... 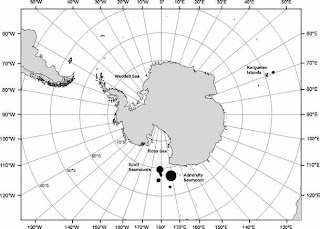 The Species Name (i.e., the Who!)
This handsome animal was named Ptilocrinus amezianeae for Dr. Nadia Ameziane, the Senior Curator of Echinoderms at the Museum national d'Histoire naturelle in Paris. 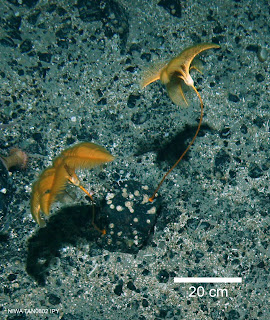 Nadia is a VERY busy person. So much so, that even my attempt to photograph her was only partially able to capture her as a high-speed blur! 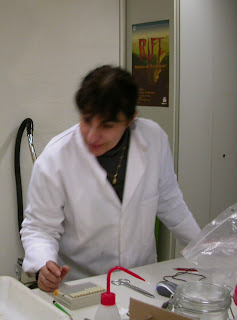 So, as I've mentioned before, new species are described by a special kind of scientist known as a taxonomist.

These are people who have become extremely well-versed in the scientific "legalese" used to describe a specific species using the very unique language that encapsulates all of the characteristics which make that organism distinct.

I'm not going to try and introduce you-my patient audience! to the finer points of crinoid taxonomy.. but I can say a little bit about the features used.. 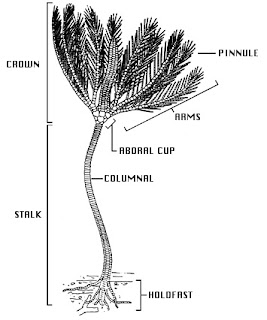 In addition to some of the general features listed above there are a host of more complicated structures used to tell different species apart.

Crinoid taxonomy is based largely on the combinations and fusions of different kinds of plates as they are arranged on the animal. Like all echinoderms-working on crinoids is like working on a complex 3 dimensional puzzle...

For example, the stalk is made up of individual round life-saver like bits... These are present on living animals but are also on Paleozoic fossils and are used to identify fragmentary remains on animals millions of years old.. 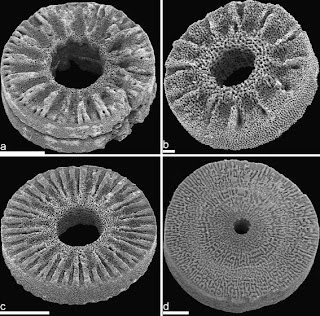 The How Long! (Ecology & Population comments) So, as mentioned in my earlier blog, the time these crinoids have on Earth may be numbered....

First -because of predation- They were observed being fed upon by several other echinoderms...

That includes the relatively common Antarctic species, Porania antarctica, a species that seems to be eating the feeding tentacles and the cup (where the soft guts and so forth are found).. 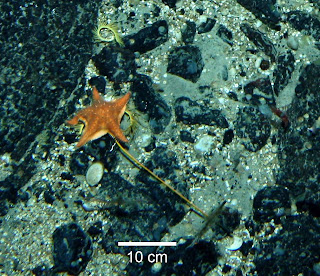 Another predator is the sea urchin Sterechinus antarcticus 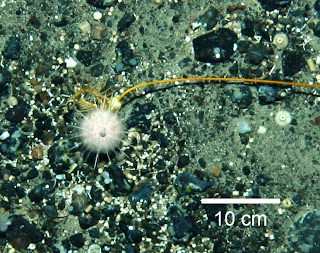 ...and are probably fed upon by fish as well...

Second-This species was unusual in that they were able to make specimen AND video observations.

They found that a lot of the observed individuals were all similar-sized adults with few small sized individuals which suggests that there isn't a lot of recruitment (i.e., juveniles replacing adults).

Plus-a survey of organisms living on the stalks (i.e., commensal epibionts), suggests that these animals are pretty old. 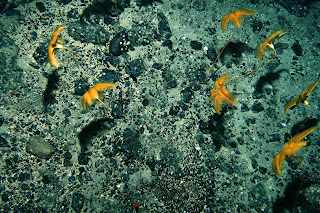 Genetics of the sampled individuals in addition to observation of the many broken bases left on the rocks (below) suggests that there were many more that are now gone... 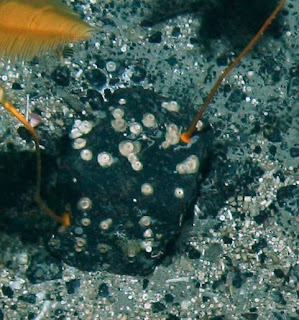 These are all indications that populations of this species are in decline....