Three Things You might not have known about the Blue Linckia! aka Linckia laevigata 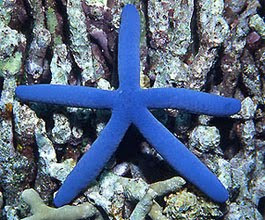 This week-thanks to questions from some of YOU-the Echinoblog pubic! I dug up some information on Linckia laevigata-aka the Blue Linckia.

For such a well-known species, I was surprised at how little was known about it..

And so here is the Echinoblog's "Three things you might not have known about Linckia laevigata!"

1. Linckia laevigata's reproductive strategy is NOT well- suited to a heavy fishery.
Linckia laevigata aka the Blue Linckia aka "finger starfish" occurs widely throughout the tropical Pacific and Indian Oceans in shallow-water reef type settings. 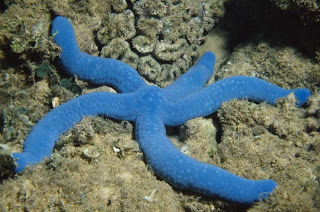 (this image from the FMNH Biodiversity of Guam page)

Sadly, most people have likely become familiar with this species because its collected and dried in the thousands and made into garishly-colored ornaments, such as the ones below... 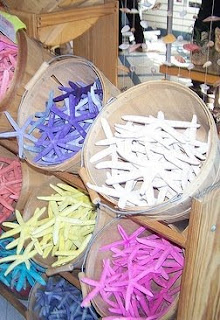 Linckia laevigata is heavily trafficked in the aquarium trade and can be seen in many tropical fish tank videos...

Based on data from a paper by Micael, Alves, Costa and Jones from 2009, it turns out that Linckia laevigata is THE most commonly collected seastar in the aquarium trade.

Their survey indicates that Linckia laevigata accounts for 3% of the TOTAL global trade in marine invertebrates!!

Most specimens are taken from the wild throughout its Indo-Pacific range. It can be commonly encountered and easy to collect. Few if any are the result of captive breeding programs.

So, even though this species is not eaten-it is harvested and given the sheer numbers of individuals that are taken (even for a common species)-ya' gotta ask the question- "How Long Can that last???"

A paper by Masashi Yamaguchi (1977) who studied population and reproductive biology of Linckia laevigata had an answer that was not encouraging.

Yamaguchi both surveyed individuals in the field and also grew out juveniles and inferred growth rates based on the overall changes in size of those lab-grown specimens.

So, it turns out that from the time that a larvae is spawned the average juvenile (larvae) may take up to TWO YEARS for it to actually settle out and transform into an (small) adult! 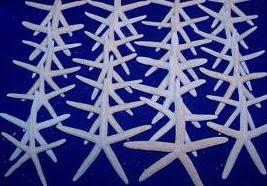 Plus-smaller individuals were often absent from population surveys-suggesting that the number that reach breeding age (i.e., are "adults") is relatively low.

A large sized animal (and these approach about 1.5 feet in diameter) could easily be several years old...

So-bottom line is that these guys grow slowly and have a low turnover rate with few juveniles ascending into "adulthood" at a given time..

It seems likely that the reason for the abundance of these animals is largely due to long-term accumulation of those adults over time. And when those guys are wiped out-they're gone.


Yamaguchi noted that days after releasing marked individuals for his study-several of the tagged animals had vanished-likely taken by "reef-gleaners"....

2. Feeding & Ecology.
Probably one of the most widespread and incorrect assumptions (like this one) about tropical sea stars, such as Linckia laevigata is that it eats clams and meat in a manner similar to cold-water starfish species such as Asterias forbesi or Pisaster ochraceus. I have complained about this misunderstanding in other blogs.. 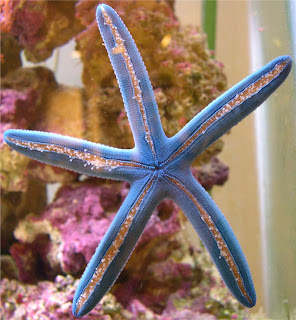 (from this Coral Reefkeeping site)

So, here's the thing-L. laevigata feeds on bacterial biofilm, algae and/or whatever nutritious goo it can get its stomach on. They are considered herbivorous.

This is an intrinsic part of their biology. Some papers such as this one by Laxton (1974-I told you information was few and far between!) determined that L. laevigata's ecological significance may lie in its relationship to become more widespread following algal growth on coral following a big predatory binge by the coral eating Crown-of-Thorns Starfish (Acanthaster planci).

Yes, some of the more experienced aquarists are probably saying "But I have seen and fed this species clam meat (or fish or whatever) before..." And yes-that may be true-but honestly, how long do those animals live after that???

My guess is that feeding L. laevigata clams without any of their primary food-would be like feeding any human pork rinds for a whole year. It might be "food" but it would be a slow death...

3. Linckia laevigata plays host to a multitude of other animals (both parasitic & commensal)

There are actually quite a few OTHER invertebrates that live either as commensals or as outright parasites on L. laevigata.

I've reactions by people that this is some kind of bad thing. Truth is, these critters would only be found on a healthy animal. Discovering one of these is basically like an extra bonus-so, best to leave em' be...

Probably one of the most noticeable is Thyca crystallina-a parastic snail that lives attached to the (usuallly oral) surface of an individual starfish. Data on this relationship can be found here in a paper by Hugh Elder (1979). The snails are attached to the coelom via a proboscis.

Most of these attached shells are apparently female and the degree of infection of Thyca tends to be correlated with the degree of water movement with more active water associated with fewer Thyca per individual Linckia..

Here is a closeup... 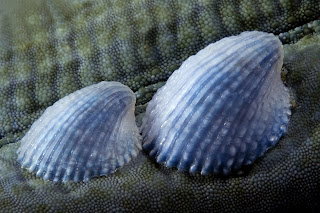 (this image from the awesome folks at Parasite of the Day)

and a more complete picture of where they live.. 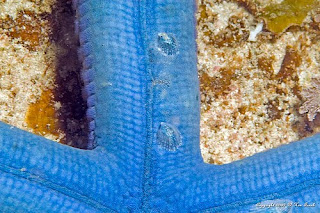 Another associated invertebrate? Is the commensal shrimp, Periclimenes soror 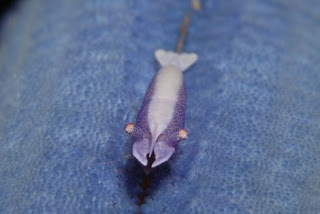 Surprisingly-there was more known about some of the parasites than about Linckia itself!

What other roles do the parasites/commensals play? How else is Linckia important ecologically?
Posted by ChrisM at 6:35 PM

Yup. It actually belongs to a family of snails that are parasites on echinoderms..

How well would it survive in a tank

They tend not to do well in aquaria based on what I've experienced.

I have a blue star-fish in my fish tank and it has been doing great for a year, now in the last 2 weeks it has dropped 2 limbs, what is going on, can anyone explain? I don't want to loose him he is awesome. Thanks in advance.

Its unfortunately not likely to do well after this point. There are multiple reasons for why this cold be happening ranging from environmental stress to starvation and they are all quite difficult to ascertain. Sorry.. but its most likely you will lose your starfish.

What is the life span of a blue linckia?

Chris, Thanks for the information because you're right: there really isn't a lot of good information out there. And unfortunately aquarists are still attracted to the Linckia's beautiful blue color . But I am still curious, if you have any tips for feeding blue Linckias in captivity? You mention that Yamaguchi grew out juvenile sea stars which leads me to believe he was also feeding them. Any tips on providing a diet in captivity?

I don't have access to the paper at the moment, but L. laevigata was described as a microalgal feeder, which suggests similar in post-settlement individuals. Unfortunately,it is difficult to pin down exactly which species, nutritional value, etc. So for example, I don't know if the algae growing in an aquarium would be sufficient. It seems doubtful that it would be. Many of these die a slow death because they are fed clam meat and etc. when they probably require a microalgal biofilm or something similar from the wild.