How to tell apart the "knobby stars" Protoreaster from Pentaceraster 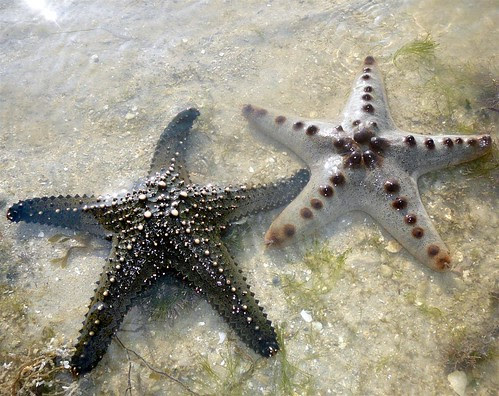 Greetings! Happy 2012 and Gung Hay Fat Choy! A prosperous Year of the Dragon to all of you!

To kick off this new year: an experiment. I get a lot of requests from my international colleagues to assist them in identification of the many kinds of starfish they observe in and around their study areas.

A lot of my colleagues (and my readers) are spread out across the Indo-Pacific, so not only the tropical Pacific-Australia, Singapore, Indonesia, Philippines, Japan, etc. but also in the Indian Ocean! including the coasts of India, Africa and so on.

One of the most frequently encountered sea stars in shallow water areas are members of the Oreasteridae. You've seen them on this blog in various places. This includes the big cushion sea star Culctia which occurs across the Indo-Pacific.

But two of the most commonly encountered genera of oreasterids are called Protoreaster and Pentaceraster!

What's so important about these species that we need to tell them apart? I have blogged about how various oreasterid species (here is the post), including Protoreaster nodosus is often heavily fished (this is the other).

Other genera of oreasterids often look similar and are fished just as heavily, typically because they co-occur. Telling them apart is, I think the first step. Which species are people seeing? Which ones are being fished?

How do I tell oreasterid starfish apart? Well, probably one of the most useful monographs on this group was written the famous German taxonomist Ludwig Doderlein when he described them as part of the famous Siboga Expedition.

And you know what's FRAKKING amazing? You can get this formerly rare monograph ONLINE thanks to the Biodiversity Heritage Library! Go here and see! (oreasterids begin just before pg. 296 with "text")

Some of the easier ones to distinguish include

Poraster superbus-which occurs across the Indo-Pacific. This species is identified by the long arms and the prominent rows of large, round knobs that occur down the radius of each arm. Poraster superbus is seen in and around tropical Asia (China and Japan), but are known primarily from the Indian Ocean. 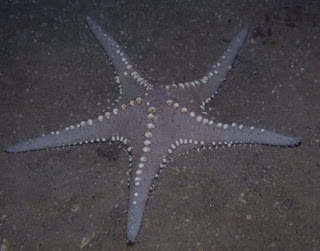 Pentaster obtusatus-another widespread species that occurs mainly in the Philippines and central Pacific area. This species lacks spines or any prominent tubercles on the surface. It has kind of a speckled appearance with lots of small, low tubercles.. 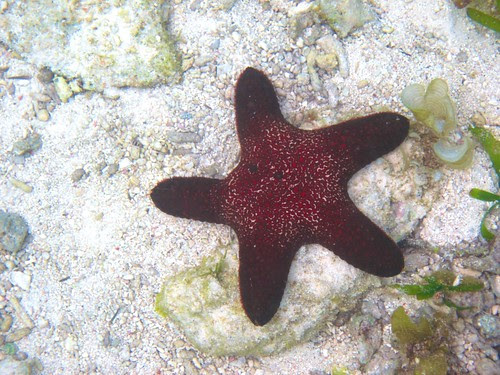 There seem to be two genera of oreasterids that seem to confuse people the most -Protoreaster and Pentaceraster- both described as "knobby stars" and both with very similar appearance.
Unfortunately, between the similarities in appearance, the variation, and a lack of scientific work on these groups, the distinctions of these very abundant and frequently encountered species is pretty poor. Add to that the natural variability of features and size differences? Well..understanding which species of Pentaceraster is which, can be complicated..

So, that's what i'll be trying to show the difference between below..

Protoreaster! Let's start with the easier one! (it has fewer species)

Protoreaster is pretty common and as I've indicated, one species- P. nodosus is getting attention because of how heavily fished it is for tourist baubles and the like..

Generally speaking, one identifies Protoreaster based on the lack of spines on the marginal plates present between the arms (i.e., interradially). Marginal plates are the two paired rows of plates that form the perimeter around the edge of the body. 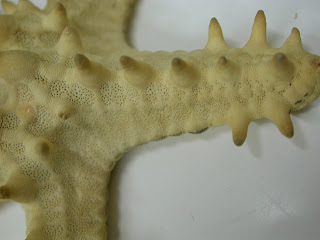 Speaking as a generality, there is a LACK of spination on the edge of species in Protoreaster.. 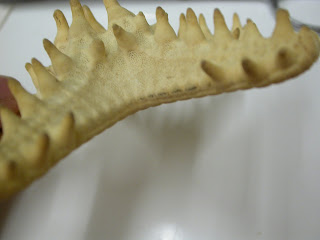 In some species, spines are absent from the marginal plate series on the arm altogether! (this species is Protoreaster nodosus) 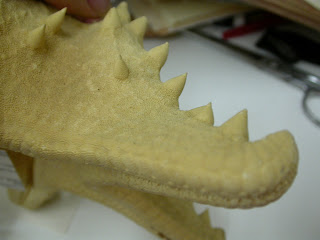 Protoreaster lincki is primarily an Indian Ocean species and it is often seen on the coasts of India and Africa... Most of the ones I've seen are this striking red and white color... 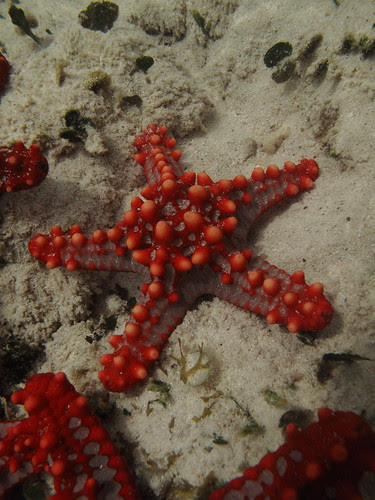 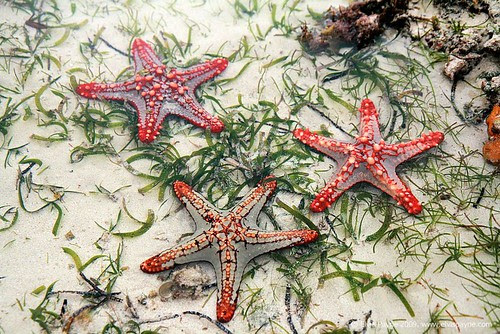 But sadly, it seems to be as heavily fished as its sister species P. nodosus.. 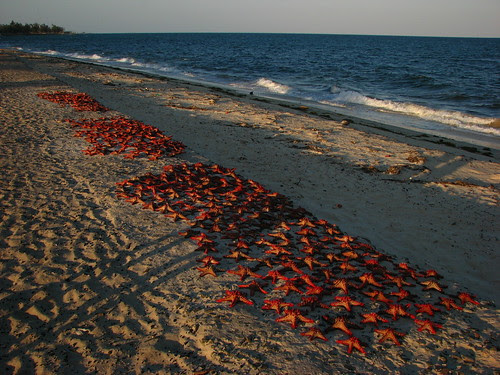 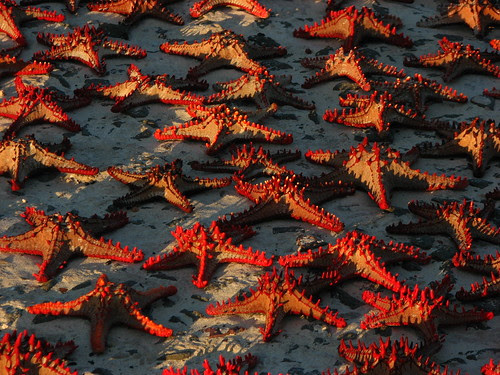 
Perhaps the best known species of Protoreaster is Protoreaster nodosus which, in some regions is so well-studied that there was actually a blog entirely devoted to it! Click here to see! Sadly, it has not been updated in many years.

P. nodosus occurs primarily in the tropical Pacific but apparently there are also records from the Indian Ocean. It is very abundant in places but there are of course concerns about how long that will last..

Diversity and variation of P. nodosus is bewildering... 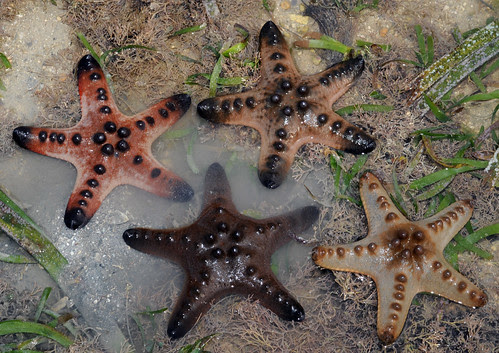 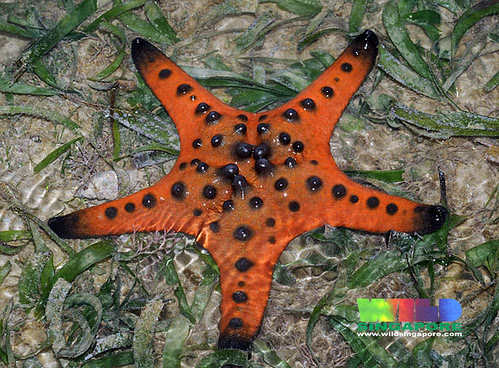 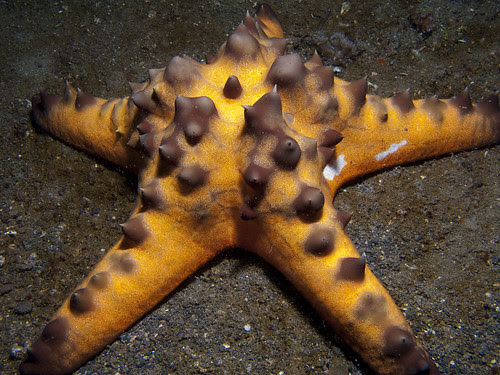 
Want to see more? Go to Flickr and just type "Protoreaster nodosus" and see HOW many you get!

I should note that there is a THIRD species of Protoreaster-Protoreaster nodulosus, but it is limited to a relatively isolated area in western Australia.

Basically, it looks like this... but given its really limited range, most folks outside of Australia won't be to worried about running into it..


Pentaceraster! Okay, so THAT was the easy part! Pentaceraster is more complicated and I won't really be able to get into as comprehensive an account.

Okay-so remember how I said earlier that spines were absent from the marginal plates between the arms?

Spines are OFTEN present on ALL if not MOST of the marginal plates in Pentaceraster. Unfortunatley-not ALL of them show this consistently..but most do.

Again...this is a group that doesn't show a lot of good solid scientific definition. 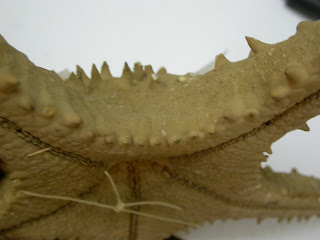 Sometimes, they aren't big spines..but more like short stubby knobs or cones such as in Pentaceraster mammilatus 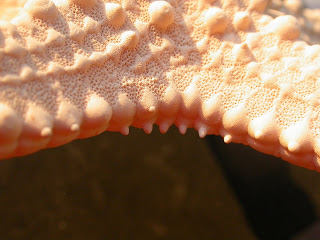 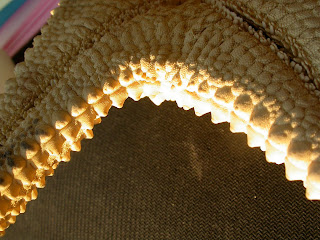 One of the other features you often see in Pentaceraster? There are often really prominent, tubercles or large features present on the disk. Its not a great character for diagnosing species-but there it is.

Pics are from Pentaceraster horridus 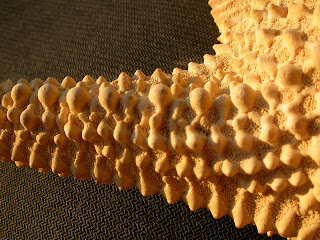 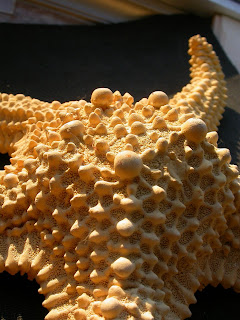 Many species of Pentaceraster are present in the Indian Ocean but many occur in the central/South Pacific.

Pentaceraster cumingi from Hawaii and the East Pacific.. In Hawaii, these can be quite big, but also occur in deeper water. Shallower water populations are found closer to places like Baja California and Panama.. 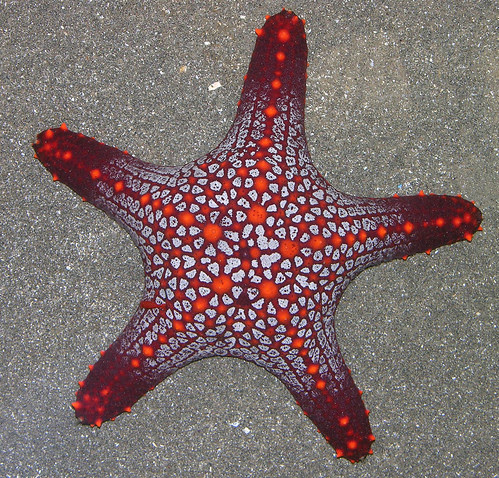 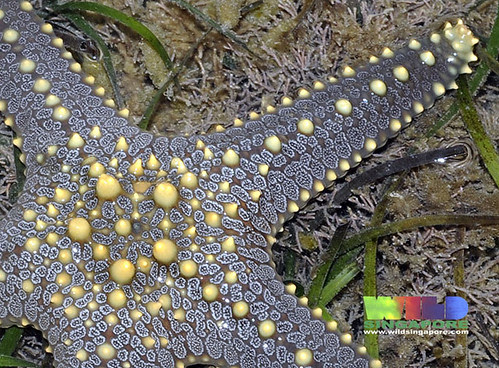 with some brilliant variation in color-even among those only from a single region (these images hail from Singapore..) 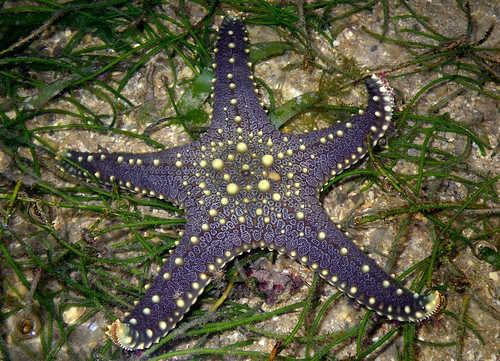 ..ahere are some less certain identifications... This one looks to me like Pentaceraster sibogae (and not P. alveolatus as indicated in the description). A species with a large number of short spines covering the surface.. from North Sulawasi! 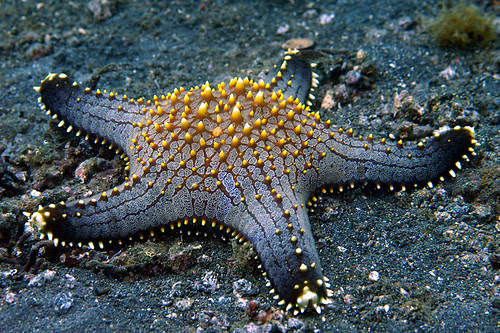 This looks close to Pentaceraster alveolatus (from Cebu in the Philippines) 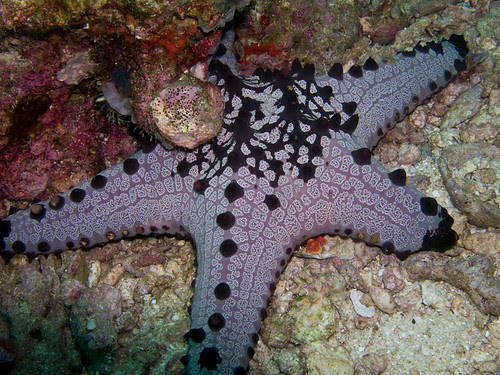 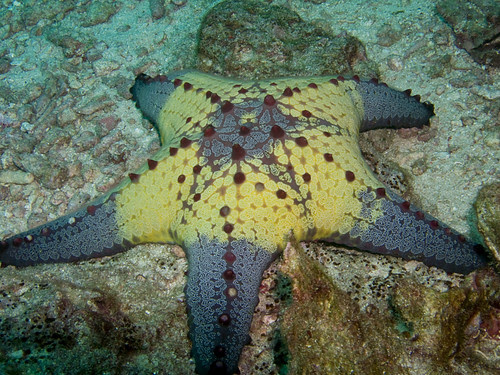 Here's some that just leave me scratching my head...All are Pentaceraster but which species? Or are they possibly new?

This one looks close to P. horridus. 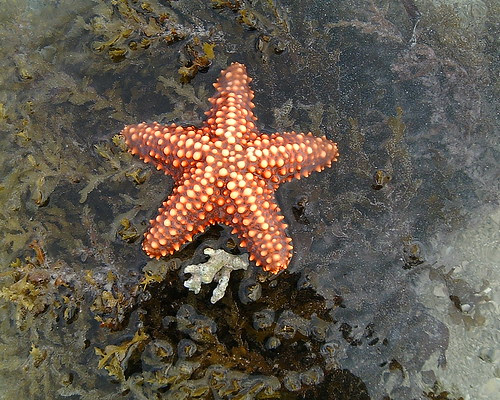 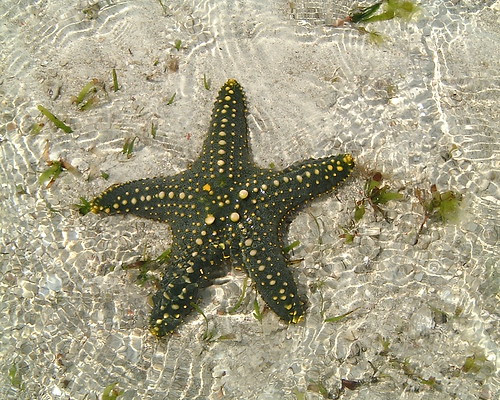 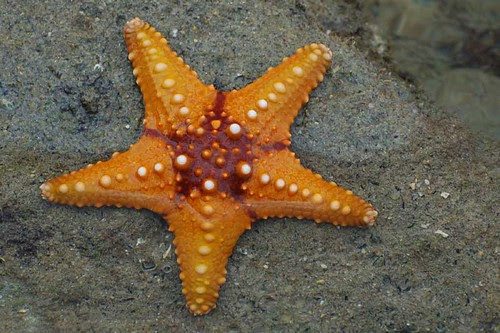 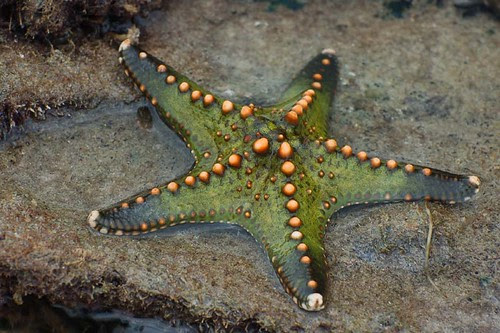 hmm...So...maybe that wasn't all that much help afterall? But it does outline how complicated understanding a "species complex" can be even if they are BIG and OBVIOUS. A lot of them are similar to one another and distinctions can be very complex.

But who knows? Maybe this blog will inspire some intrepid new student to pursue the study of oreasterids!!

If ya' think about it, you gotta go diving and snorkeling in some pretty exotic places to get some DNA for these guys...
Posted by ChrisM at 5:48 PM

Hi
We were fishing in Zamboanga and a fair sized star got hooked.Not sure on the species as its not the regular knobbly ones we see on sale i the tourist shops.Can I post a photo?