Bacteria in the Belly of the Beast! Prokaryote Diversity in Abyssal Sea Cucumbers! 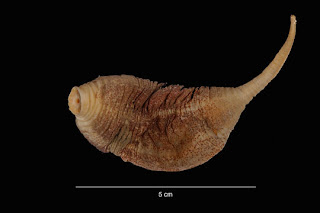 (photo from the USNM Invertebrate Zoology Collection)
This week a follow up to an earlier blog I wrote in October last year about microbes in the guts of deep-sea holothurians!

This new paper is by Teresa Amaro, University of Aveiro in Portugal and her colleagues and has been recently published in Deep-Sea Research I vol. 63: 82-90. (she also wrote the earlier paper that I wrote about above)

(photo from the USNM Invertebrate Zoology Collection)
Molpadia are infaunal deposit feeders-that is they live buried in the mud, head down with mouth directed into the soft, muddy goo... (the mouth is shown below-this is the part that faces into the mud! Lovely, yah? 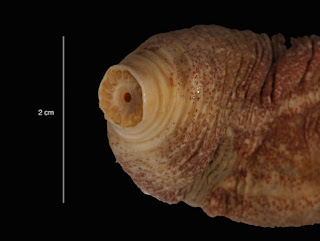 (photo from the USNM Invertebrate Zoology Collection)
Their "tails" presumably face upward to permit the feces to vent out on the surface, following ingestion of the mud/sediment... (photo from the USNM Invertebrate Zoology Collection)
Molpadia can occur in very high biomass and in great abundance on the deep-sea floor with some 220 individuals per square meter!!

Bacteria and Archaea on the Deep Benthic Floor!
So, you've got a big, living dirt-eating vacuum cleaner buried in the mud of the deep-sea floor. What are they doing down there?? What are they interacting with? Are they Eating?

(photo from the USNM Invertebrate Zoology Collection)
For years, it had been noticed that there is actually quite a lot of microbial life present in the oceans. Scientists have been using methods known as DNA fingerprinting to recognize the amount of life that is present on deep-sea bottoms.

The diversity we focus on here, emphasizes two of the major Kingdoms in the overall Tree of Life-The Archaea and the "Bacteria" or the Prokaryotes-those with less developed cells relative to the eurkaryotes. Note in the diagram below.. "Eurkaryota" refers to organisms with full and complete cells, such as algae, protists and all the animals. 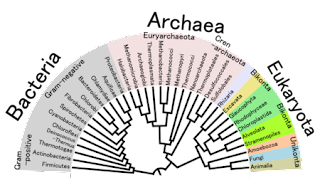 (Image from Wikipedia)
The prior blog that I wrote about this showed that there different "kinds" of microbial life present not only on the sea bottom but actually IN the guts of these deep-sea sea cucumbers.

Amaro's newer paper now shows that there is an astonishing diversity of microbes associated with the gut contents in Molpadia musculus! And details the distribution and diversity of the kinds of microbes present.

Amaro and her colleagues surveyed the abundance of different prokaryotes both in the sediment (measured from sediment cores) and at different points along the gut of Molpadia and found this.... 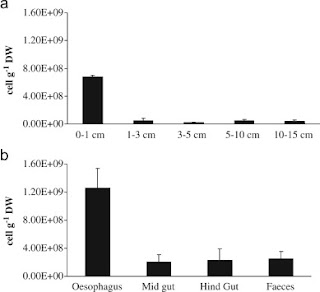 (Fig. 2 from Amaro et al., 2012)
First (top-Fig. 2a) , that the actual amount of prokaryotes (this includes both bacteria and archaea) was highest in the top 1 cm of sediment.

Second (bottom-2b) That after survey the abundance along the animal from the gut to the end, the greatest amount of prokaryotes was actually found in the oesophagus (i.e., the front end of the intestine) of the animal.

The latter result likely shows the result of digestion with most of the food (i.e. bacteria) being digested as it proceeds to the midgut and so on...

Both of these results make sense. Prokaryotes are settled out on the surface and the oesophagus (the front end of the intestine) is where all of that enters into digestion.

What kinds of bacterial diversity did they find?
The authors counted the diversity of bacteria in terms of Operational Taxonomic Units (OTU)s-that is a general term that refers to the different types of organisms or species present.

They found 28 to 71 OTUs in the surrounding sediments but about 33 to 105 in the sea cucumber itself! 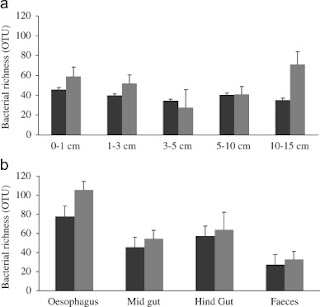 (Fig. 4 from Amaro et al, 2012)
The authors further compared the abundance and composition of the bacterial OTUs (i.e., the diversity) between the sea cucumber and the surrounding sediment.

Now, if the surrounding bacterial were food-one would expect the same diversity in the sea cucumber as in the nearby sediment.

BUT, as it turns out, about 40% of the bacterial OTUs were uniquely associated with the gut contents and were ABSENT from the surrounding sediments!

Some Further Dynamics from the paper...

This suggests that GREATER than 80% of the total were digested by the animals.

2. Archaea vs. Bacteria in the Hindgut. They also found that among the prokaryotes-bacteria accounted for only about 55% of the total number found in the oesophagus but only 35% in the hindgut, BUT archaeans actually increased in the hindgut! Why? The authors suggest that the different kinds of prokaryotes are used differently across the intestine..

3. But do the prokaryotes keep Molpadia fed? Well, in a word: No.

It turns out that these bugs only contribute about 0.5% of the total organic carbon used by individuals in the study. The authors conclude that Molpadia, at least, does not rely in any significant way, on prokaryotes for their food requirements.

4. So, if not food-then what are they for?? As indicated above- the DNA fingerprinting identified the fact that the "bugs" in the surrounding sediment were significantly different from those in the sea cucumber itself.

And so there we have it. Some deep-sea sea cucumbers are just big bags filled with prokaryotes that feed on mud and ooze!
Posted by ChrisM at 7:44 PM