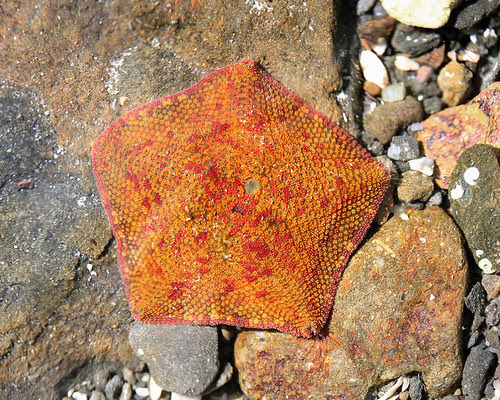 Scientists LOVE a good mystery. And biology is full of them. But some are not obvious and are found among the tiniest of creatures.... 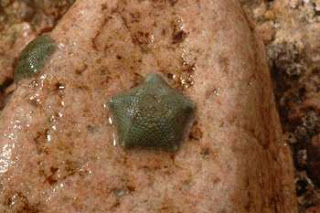 This tiny species (often about the diameter of a dime or small coin, 1-2 cm across) is present widely across the Indian and Pacific oceans as you can see in the dark brownish pink colored areas on the map below... Primarily in Australia and on the east coast of Africa (Indian Ocean) 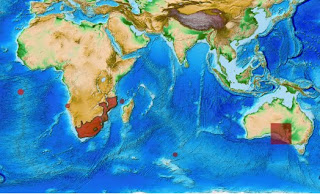 (from the World Asteroidea Database listing for P. exigua!)


That little starfish occurs over a HUGE AREA.

When we see invertebrates occurring over an unusually large region we typically assume that its ocean borne larvae are dispersed via ocean currents, carrying the "babies" of this species over a huge area.

Larvae transported in this way are referred to as planktonic that, is they swim and are dispersed via ocean currents. Think of it as similar to the way pollen is blown through the air and carried to far away lands..

But as it turns out, Parvulastra exigua doesn't have planktonic larvae!!

Note the red box below.. There's the animal plus its corresponding bottom-living (non-planktonic) larvae. 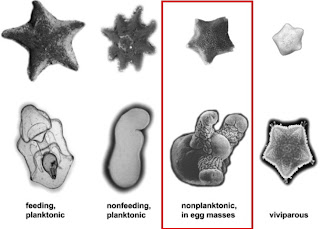 A mysterious paradox then enters the scene!

How did such a widely distributed species get around if the larvae DON'T GET carried around on ocean currents??

A recent paper from Maria Byrne's lab at the University of Sydney by Sergio Barbosa and his colleagues in the new issue of Marine Biology adds some new insight into this big question.

For example, the eggs of P. exigua can be fertilized by the direct release of sperm onto the egg masses!

Now, this may not sound remarkable, but remember that nearly all starfish reproduce by directing their eggs and sperm into the water!

So, this kind of reproduction is ACTUALLY a kind of PSEUDOCOPULATION. Hmmm...where have we seen that before? Go here and see some of my earlier posts on this weird pseudo-sex behavior.

BUT As Dan Savage often says "But wait! That's not all, there's MORE..."

Could this have some bearing on the paradoxical distribution mystery?

Could having the powers of outcrossing AND self-fertilzation explain how this tiny starfish gets so far around the ocean??

Barbosa and his colleagues sampled egg masses with evidence of self-fertilization from 5 populations across Australia and here is what they found!!

So, a significant number of the population can self-fertilize! Some populations do so more than others!

Some Reproductive Dynamics!
In biology, we often look to "outcross" or to spread our genetic material across other individuals in a population in order to "reshuffle" or diversify the individuals in the gene pool, thus providing more material for selection.

BUT we have exceptions! Sometimes, "selfing" (i.e reproducing with oneself as a simultaneous hermaphrodite!) and yes, I've always wanted to write that sentence Can give a reproductive advantage. How?

Suppose you are the ONLY member of yourself in some remote location? Creating further progeny from yourself is one way to start a population!

This species, for example, is called Parvulastra vivipara-another hermaphrodite. This species actually BROODS its young (i.e., it has little baby starfish that live on the adult!). P. vivipara produces young but often in isolation for YEARS... 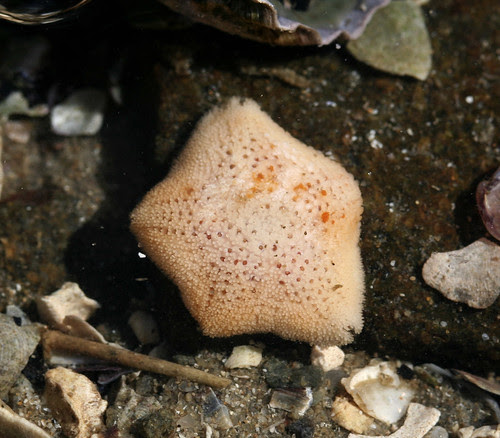 (Photo by Nuytsia@Tas)
There are challenges here. Is there enough diversity between your eggs and sperm? How many fertilized eggs mature to the juvenile stage relative to "out-crossed" individuals?

The important point here is that this mixture of reproductive modes..the pseudocopulation, the outcrossing, the "selfing" and so on are all important if not critical to understanding the widespread distribution/ success of this species as it becomes distributed across the oceans!
Posted by ChrisM at 5:50 AM

Funny isn't it, that this species is reproductively prodigious, while showy tropical sea stars such as Protoreaster and Linckia have difficulties in juvenile recruitment.

By the way, have you seen a Japanese origami site that makes origami echinoderms?