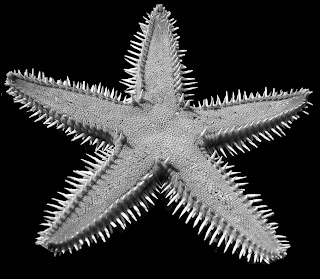 My newest paper-a big 22 page monster- that reviews the biodiversity and phylogeny of the Asteroidea (i.e., how many and the evolutionary history of starfish) was released today! Go click and see it! You know you want to!   This was co-written with my colleague Dan Blake, Professor Emeritus at the University of Illinois at Champaign-Urbana.

The paper is Open Access! which means that anyone should be able to go in and check it out for free!

By coincidence I was looking at a TV show dvd set which of course, nowadays come with extras-commentary and so forth..

It then occurred to me-why couldn't I do the SAME thing with my paper??  I'll explain some ins-and-outs of the scientific paper as well as some insight into writing...

What kind of paper is this? A Review Paper!

Most scientific papers folks are accustomed to come in a fairly stereotyped style that gets broken down like so:
BUT every once in awhile, a scientist is asked to write what's known as a review paper.

Basically-this is where you take EVERYTHING about a particular topic and summarize ALL OF IT up to that point. Its different from a traditional paper and there's some ups and downs...

So what did I learn about starfish from a "broad view"??

Colleague Jarrett Byrnes who writes "I'm a chordata! Urochordata" asked me in Tweet this morning what surprised me the most in this paper?

So, let me summarize some neat factoids!

There are some 1,890 species of starfishes. This is perhaps only exceeded among living echinoderms by the brittle stars for which there are over 2000 species (2,064)!

What I thought was most interesting though, was that the great majority of those species, about 68% of them (1291/1890) actually live in cold-water settings such as the deep-sea, Antarctica, etc.  with only a minority (about 11%) that live exclusively in tropical shallow-water regions, such as reefs and so on... with the remainder living in temperate water habitats.

Other stuff:
The most taxa overall?:  Goniasteridae with  256 species in 65 genera. 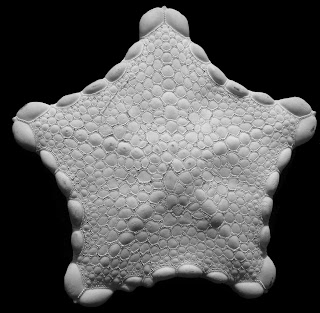 with 2nd place going to the Astropectinidae with 243 species in 26 genera.

The ever-familiar Asteriidae, which includes familiar species such as Pisaster ochraceus and Pycnopodia helianthoides the sunflower star comes in 3rd with 178 species in 35 genera. 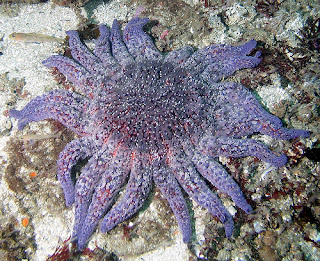 
The paper was part of a series intended to, in part, advertise the World Asteroidea Database and all of the other marine invertebrate species treated by the World Register of Marine Species (WoRMS for short).

A couple of charts that are on the "Stats" part of the WAD show some interesting trends but I didn't get them into the paper...


First-the number of species described vs. Year (since 1758-establishment of the Linnean Code)

Basically, the database can track the year of description of each species which is then plotted over time.


Growth seems to be gradually continuing although not perhaps as steeply as others...

A second interesting graph plots the number of species described by various authors over the last 10 years or so..


Of the names on that list McKnight and Rowe are largely retired (and the papers counted below are for older names predating 2000). I get the impression that "Clark" is an amalgam of several different authors named Clark (for some reason echinoderm biology has a LOT of people named Clark)-so I will have to check-but it is probably artificially high, "O'Loughlin" works primarily on sea cucumbers these days.


So, really, I'm one of the only active people that has been "upping" this number lately.....