I've always been a big fan of how the vast body of available images and crowd-sourced information can be beneficial to scientists but also interesting and engaging to the citizen scientist!  From tracking down videos and images of rarely seen benthic ctenophores (here) to helping to locate invasive brittle stars! (here)

As I've said in the past-images and videos collected by everyone..from amateur divers on Flickr to pics aggregated on websites such as the Encyclopedia of Life contain MASSIVE amounts of potential observations (and thus data)!!

But of course, the images have to be recognized first.  How often do discoveries like this happen?  Sometimes new species are found on Flickr (such as this new lacewing species).

I've blogged about how crowd sourcing and citizen science has discovered new and unpublished (or at least very poorly known) commensal behavior in sea stars, fishes and their commensals (here!) and today another discovery!

But not in the exotic Indo-Pacific but in the cold to temperate water familiar North Atlantic!!

Our subject is a starfish called Porania pulvillus (aka the "red cushion star"-one of many), one of many summary accounts of this species can be found here.  It is an uncommon but recognized species in the North Atlantic from both the North American and European sides...  Porania is a member of the Poraniidae which is an unusual group occuring mostly in deep-sea and cold-water habitats, occurring from roughly 10 to 300 (often deeper in some places) meter depths . Surprisingly little is known about them...

The story starts with a picture...
Yesterday, I received an inquiry from my colleague at EOL- Dr. Jen Hammock who forwarded me a link to the picture below from the SERPENT Media Archive!  SERPENT is a coalition of industry and academic organizations that work to share images of the deep-sea with the public..(here) to see more.

She asked me "What's going on here?" "Is this feeding on sea pens a thing?"
Indeed it was a "thing!"

But let's take a quick step back and get started with all the players!

What we know...
First: the species..... Porania pulvillus! A nicer pic is here: 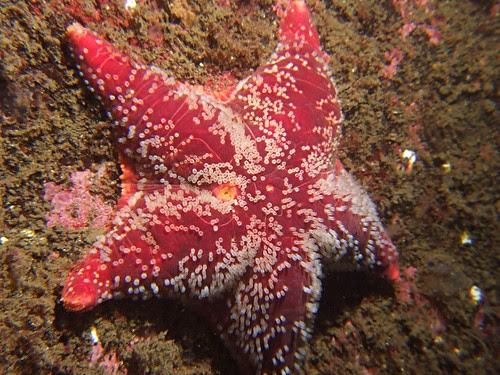 Note that the white "dots" above and the finger-like yellow bits below are the papulae- aka the gills! This is how the animal "breathes".. Image by Mark Craig 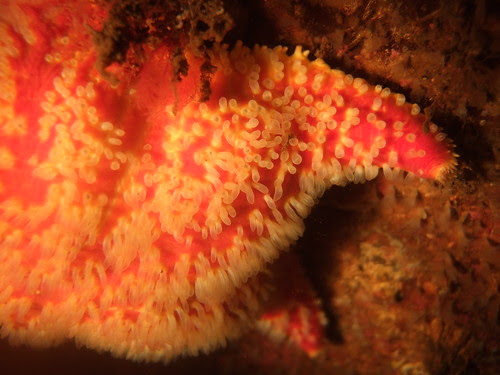 In 1915, zoologist James F. Gemmill described what he observed to be filter feeding using the numerous tiny cillia covering the body of this species.

Dr. Gemmill was quite an authority..being an  M.A., M.D. D.Sc, F. Z.S."!!! And is pretty well known historically for a number of significant contributions.  He dropped little red carmine particles (basically a  red dye made up of a fine powder) on P. pulvillus and watched them move over the surface..

A quick reminder about basic biology of this (and all starfish). The epidermis COVERS the body! The epidermis is in turn covered by tiny hair-like structures called cilia, which are usually in constant motion.

These little particles were moved over the body and apparently headed towards the mouth. Here's his diagram showing the little arrows apparently indicating how water was flowing to the mouth.

And this description as a "filter feeder" has stuck. Even a relatively recent paper (here) from 2005 describes them as "suspension feeders." But are they truly???  Is that all there is to the story?  Could they be predators? Opportunists?

A paper in 1973 (here), one of the first SCUBA accounts documented that they fed on "soft corals" such as this Alcyonium digitatum-the so-called "Dead Man's Fingers"
The paper reports that this species feeds on brachiopods and even tunicates!  Here's a nice one showing feeding on tunicates...

Perhaps P. pulvillus is sort of an opportunistic predator in addition to the "suspension feeding" with mucous threads?

Is this Porania pulvillus getting ready for a big banquet? Or is this the echinoderm version of those "1 dog, 1 pig, and a cat" pet adventure stories?
But getting back to the picture...
It turns out that what we are seeing here is probably something unreported! NEW!!  A previously undocumented feeding interaction!!
So, that Porania pulvillus was FEEDING (that's what it appears to be doing) on this sea pen (called Pennatula phosphorea). Image was from 124 meter depth in the North Sea, west of Shetland.

Again-this was a NEW discovery! What does it mean for this animal's ecology? Does it mainly feed on yummy cnidarians?  Is the species more opportunistic than thought?  More predatory than previously thought??

And of course.. there's the impact on the bottom fauna.... I've written about goniasterids that feed on deep-sea coral (here) and here's a video about them from MBARI a few years back...

These types of interactions are important owing to our interest in deep-sea corals and their role in biodiversity and conservation of deep-sea ecosystems..

But after looking at the pic above from the SERPENT pool on EOL, I discovered several more...

Some further interesting feeding observations of Porania pulvillus, such as this one of it hunched over this rock and possibly feeding on the polychaete worm Pomatocerus sp. (which makes up the tubes). And of course, there could be hydroids or other encrusting goodies on there as well...
Here were a couple that showed P. pulvillus CLEARLY hunched on and probably feeding on something-but it was unclear exactly what it was.  Dead sea pen maybe??
And here we have P. pulvillus feeding on another mysterious gooey blob...

The one below was labelled as "Porania pulvillus" but at least most of these look like the goniasterid Ceramaster granularis, another species with a large disk and triangular arms...These look like they're hunched over the sponges.  Looks very much like feeding...

But either way with whichever species, here's ANOTHER great example of a behavior that hasn't been published on as yet..

Bear in mind-if these things had been thought of as primarily suspension feeders for years and years-and it turns out they're big time predators???  That would represent a big shift in understanding the ecosystem/food web in this area. Sometimes it can all be in the details..

So.. really ALL kinds of neat legitimately important observations from this pretty vast pool of data fr. SERPENT/EOL!

With my appetite teased I spread out a little more and went looking on Flickr!

Feeding on some green stuff! Algae? Hydroids? Image by Gordon.Milligan 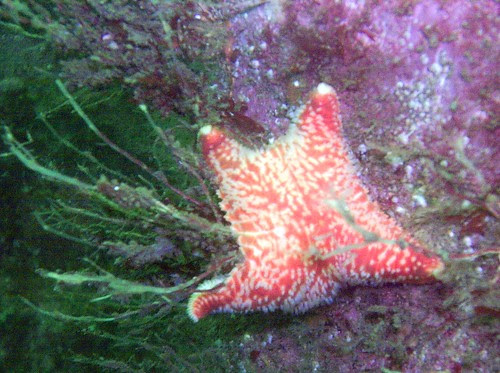 Or maybe gettin' ready to go after those tunicates in the upper right hand corner? 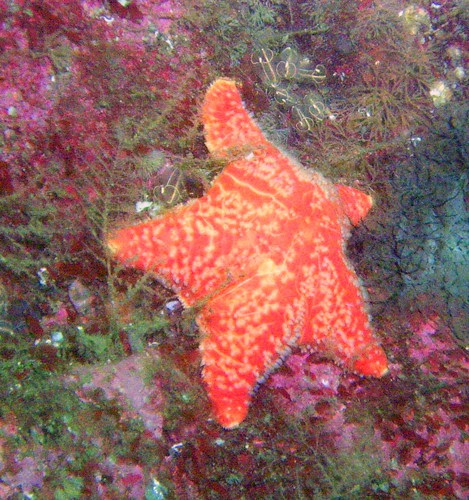 Feeding?  Or getting ready to spawn?
So, I've spoken about how poorly known the "spawning on tippy toes" posture is... Here was the link to that post

What does this say?
What I see when I look at these pictures is inspiration.  ANY of these observations- the feeding or the spawning posture might be the beginning of someone's research project...or be relevant to one.

It seems strange to think -but this blog has more on the "natural history" of this species than has been published since that last account in 1973!  Many of these pictures have been floating around the internet for YEARS. Funny to think of "natural history" and "data mining" as terms that go together here, but here they are indeed a strange marriage....

Thanks to Jen Hammock, EOL, the SERPENT Media Project and all the photographers cited!
Posted by ChrisM at 11:42 PM