P is for Parasitic Snail! Enter: The Eulimidae!

Last week, we saw some pics of big predatory snails feeding on starfish!  This week, we turn our attention to smaller snails with a more insidious means of feasting on their hapless echino-prey!

Behold the Eulimidae! A family of snails, whose primary means of nutrition is feeding on echinoderms...specifically as PARASITES! They pretty much attach themselves to every class within the living Echinodermata: urchins, crinoids, brittle stars, sea cucumbers (remember the sea pigs?) and today's subject... starfish!!

Eulimids are insanely diverse. There's over 85 genera and easily hundreds of species. With likely more being discovered as they are found on their hosts..

If you guys ever need a one-stop shop paper on the Eulimidae, you are in luck! This paper (behind a paywall) includes a summary of biology as well as an overview to all the genera.   The acknowledged world expert on these is Anders Waren,  a scientist at the Swedish Natural History Museum

Basically, eulimid snails feed by sticking their proboscis into their host and sucking the tasty, delicious juices out of them. This in itself is kind of interesting because most echinoderms use a kind of specially treated seawater (filled with body cells called coelomocytes) as a bodily fluid.

Apparently, its these cells-the coelomocytes upon which the snails feed... Note below, the extended probsocis...

This snail was described as Melanella with what appears to be its proboscis extended and gives you a general idea of how these snails operate...
Here is a snail in the genus Parvioris with its proboscis extended and the animal hard at work..
From what I've been able to determine, certain snails DO tend to occur on certain hosts, but the pattern doesn't always seem to be consistent. Some specific species of snails apparently occur on different starfish hosts but some are specific to types of hosts, e.g. sea urchins or sea cucumbers.. Many of these are undersampled, and so it still remains to be seen how much host variation is observed..


1. Ectoparasites. Some eulimids are ectoparasites, that is they are attached, but only on the exterior.. Here's one hunkered down on the disk of the very gorgeous goniasterid Iconaster longimanus.

Here's another one attached to the sand star Archaster from Singapore, but several species of starfish are often hosts. Here's a short write up on their page about them..

These are famously parasites on the blue starfish Linckia laevigata where they are often found on the oral surface around the tube foot grooves..

We often see these snails well-camoflaged as the same distinctive color which identifies their host...

Some are not so well-hidden.. (and yes, sometimes Linckia laevigata is orange!)


2. Endoparasites!  On the OTHER hand..some eulimid snails, get pretty "dug in" and have literally buried themselves in their work!

They basically embed themselves in the host, attach their proboscis directly to the internal arm canals and just suck on em' all day....  This one, Parvioris fulvescens looks like its embedded itself in what looks like Ophidiaster (?)

Here..we have some which have embedded themselves in Neoferdina, a goniasterid... Note how they've pretty much buried themselves INTO the skeleton of the animal. The starfish are strongly calcified.. and since there's no clear damage, I wonder if  these get in as juveniles...


3. Parasites of the Deep!
and lest, you think that eulimids only parasitize shallow water reef species, let it be known that many deep-sea starfish are also parasitized by snails! Here is Asterophila japonicus as reported by Sasaki et al. in: Sasaki, T., Muro, K. & Komatsu, M. 2007. Anatomy and ecology of the shell-less endoparasitic gastropod, Asterophila japonica Randall and Heath, 1912 (Mollusca: Eulimidae).Zoological Science 24(7): 700-713.

This species seems to be a host in the astropectinid sea star Leptychaster,where it has burrowed UNDER the disk and lives right above the stomach! 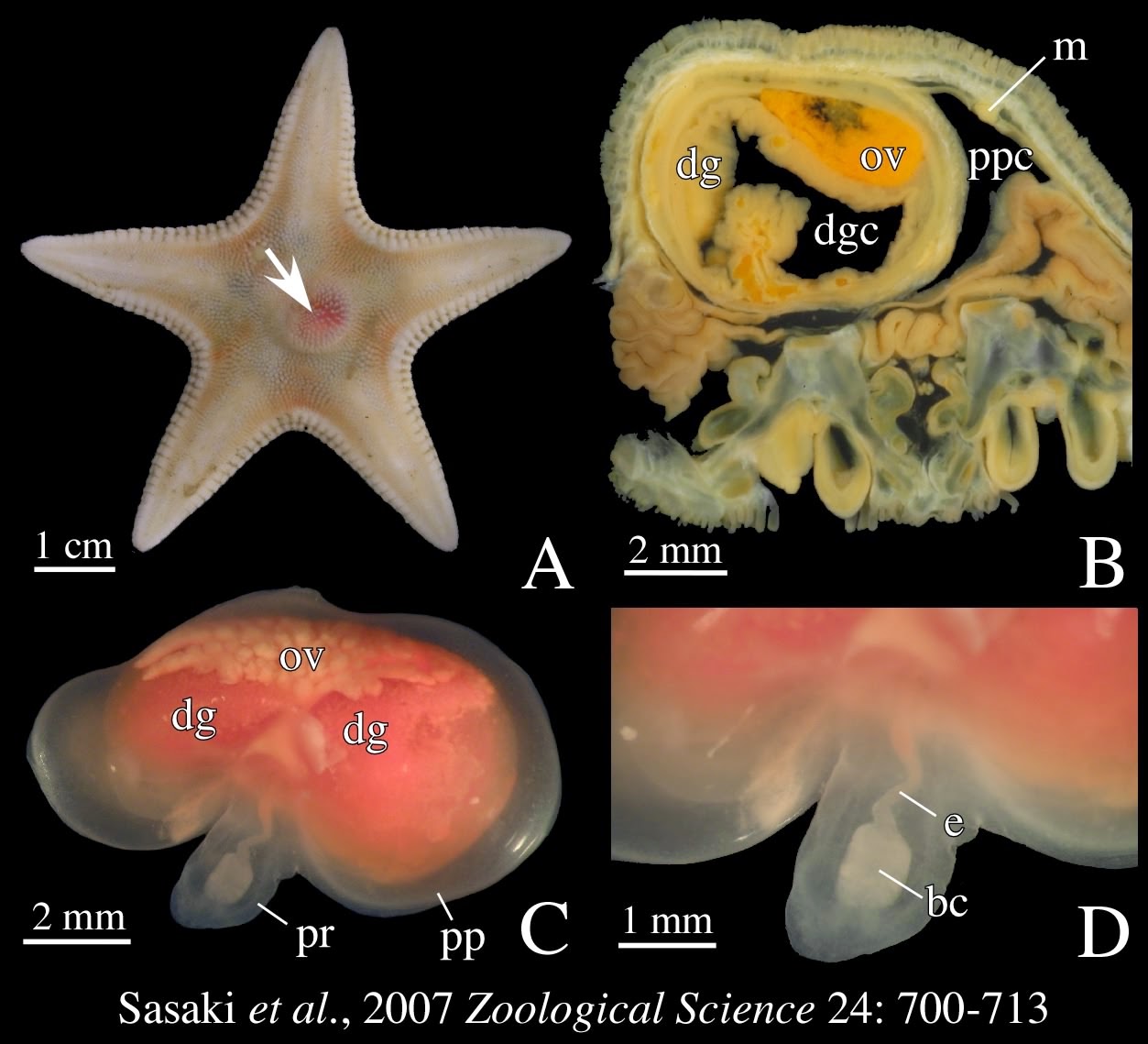 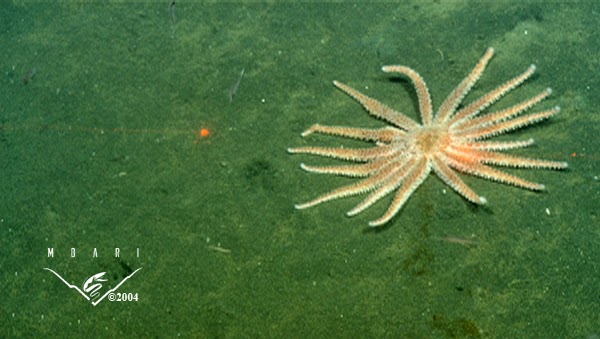 Which they were actually unable to ID to phylum until they realized, when it was spawning, that it was producing veligers (snail juveniles)!!

do you think that these parasites also attach on sea urchins ? I suspect that the Tripneustes gratilla populations here in the Philippines are also infested by gastropod parasites

Yes. as I wrote above. they parasitize all the living echinoderms.

Thank you Dr. Mah, i kind of missed that!

Great to see that these little snails (Thyca crystallina on Linckia laevigata)also has been seen on other colored Linckia. Till now I have only seen them on the blue one. Thanks for the pictures!

Hi,
I have seen on your blog parasites of Echinoderma,(Eulimidae) is it possible for you to collect spécimens for me ? I work at the MNHN And I need fresh spécimens for my publication.
Please contact me at :
al.leopold@laposte.net
Regards

There are many specimens of eulimids in the MNHN collections. Good luck!

I hope you can help me with an ID for this pretty little eulimid that was posted to my facebook group. I have exhausted my resources and would very much like to know.

I have found the tiniest of parasitic snails on my tile star fish which eventually died from all of the snails sucking the life out of it. They are white and about the size of a small bead. I have pics.

I'm not sure how to send pics but they're sharp and pointy at one end very small, hard and white as I said.

thanks. no worries about pictures. If they resemble the eulimids in this post, that's what you've likely got!