The Rotulidae: Strangest of the Sand Dollars 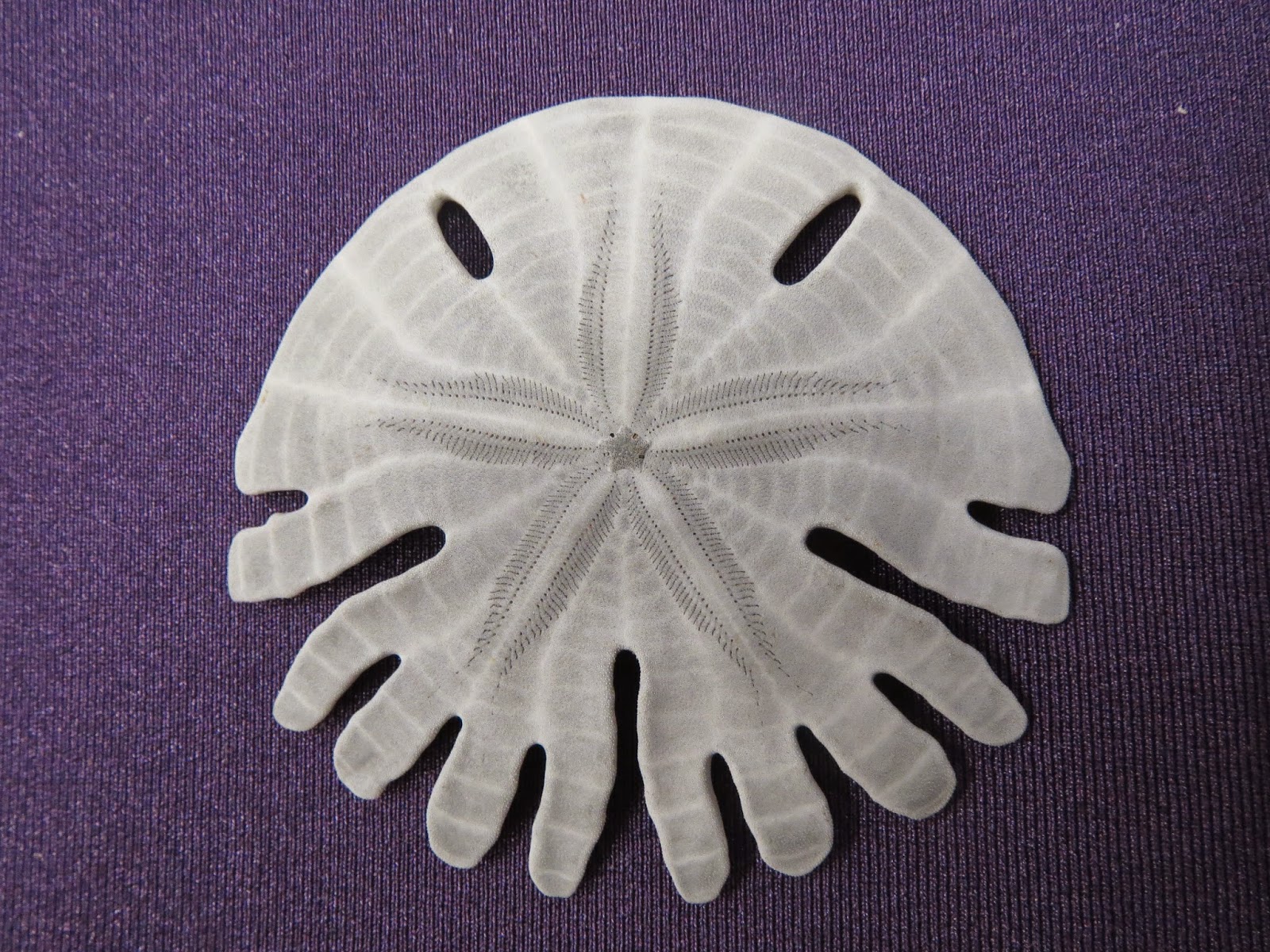 Leave it to echinoderms to take even the best known of animals, like a sand dollar, and make it even STRANGER than you could have thought!! 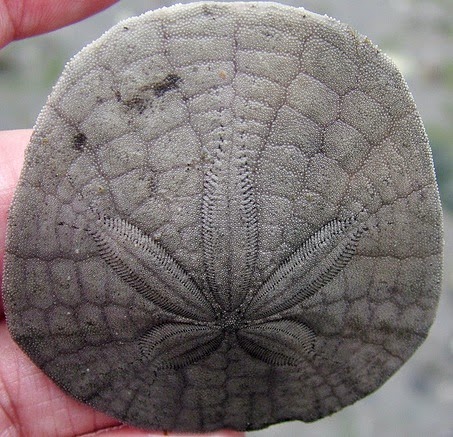 But first things first. Sand dollars are highly modified SEA URCHINS that live on sandy bottoms, mostly in shallow tropical to temperate water places. Please make a note of it. (or go read this post here!)

Most sand dollars are either kind of disc-shaped such as this Pacific Dendraster excentricus.

But then you get THESE weirdos!

See all of those flanges or finger-like projections coming off the edges?? Those are NORMAL for these sand dollars!  Let me introduce you to the sand dollars of the family Rotulidae! 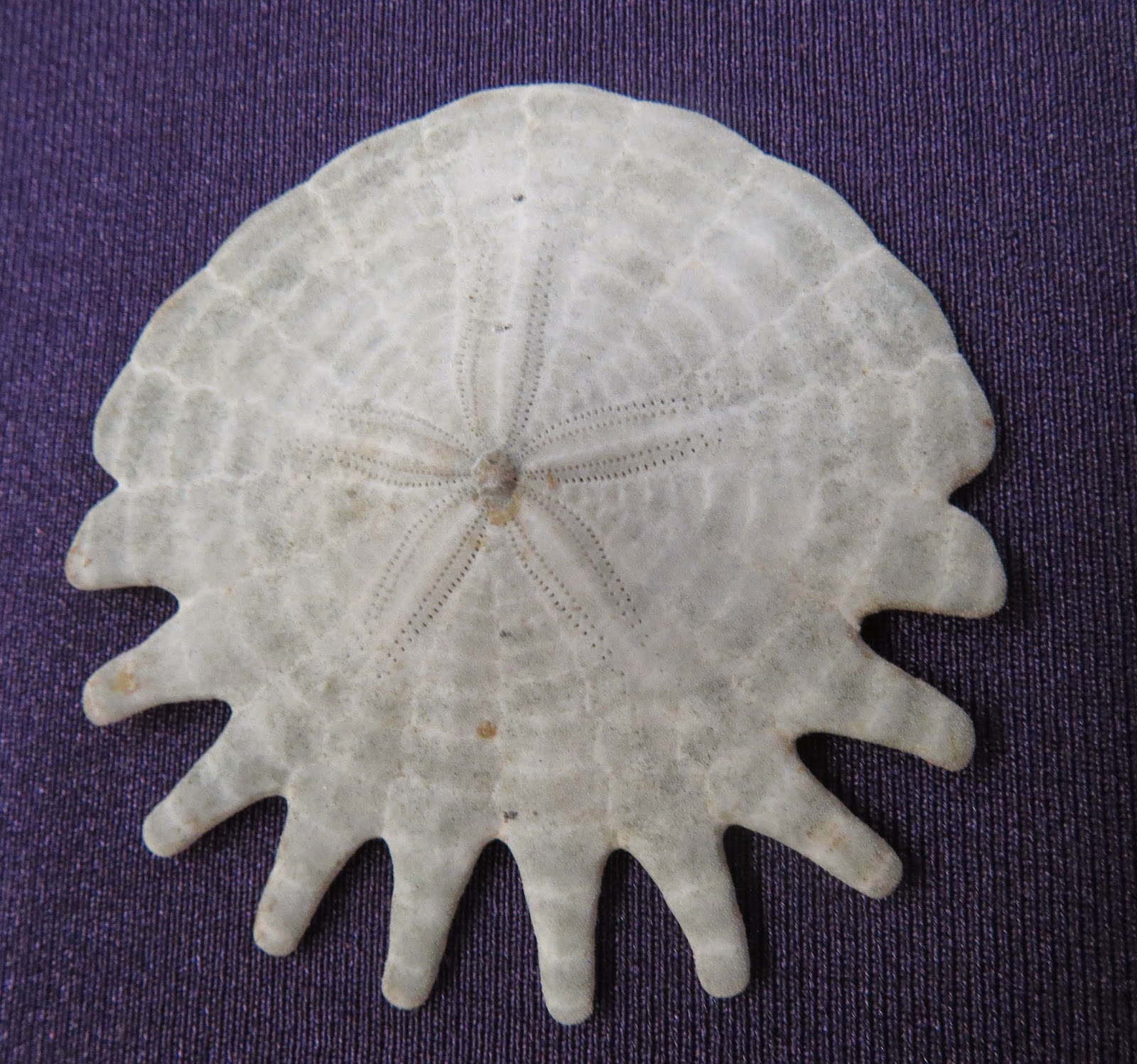 There are actually THREE genera of rotulid sand dollars, Rotuloidea (the oval one), Rotula (the one with holes) and Heliophora (the one without holes). And all of them seem to have some degree of these weird finger-like projections. Living rotulids seem to occur almost exclusively in the West Africa region (and some are fossils-see below).

Let's go through and meet these three kinds of rotulid sand dollars!! By the way, if you want a scientific guide to ALL THE SAND DOLLARS including the rotulids, it is available as an OPEN ACCESS file here. A fine piece of work by California Academy of Sciences Curator and sea urchin/echinoderm expert Rich Mooi.

I should note that all members of the Rotulidae are also found as fossils... 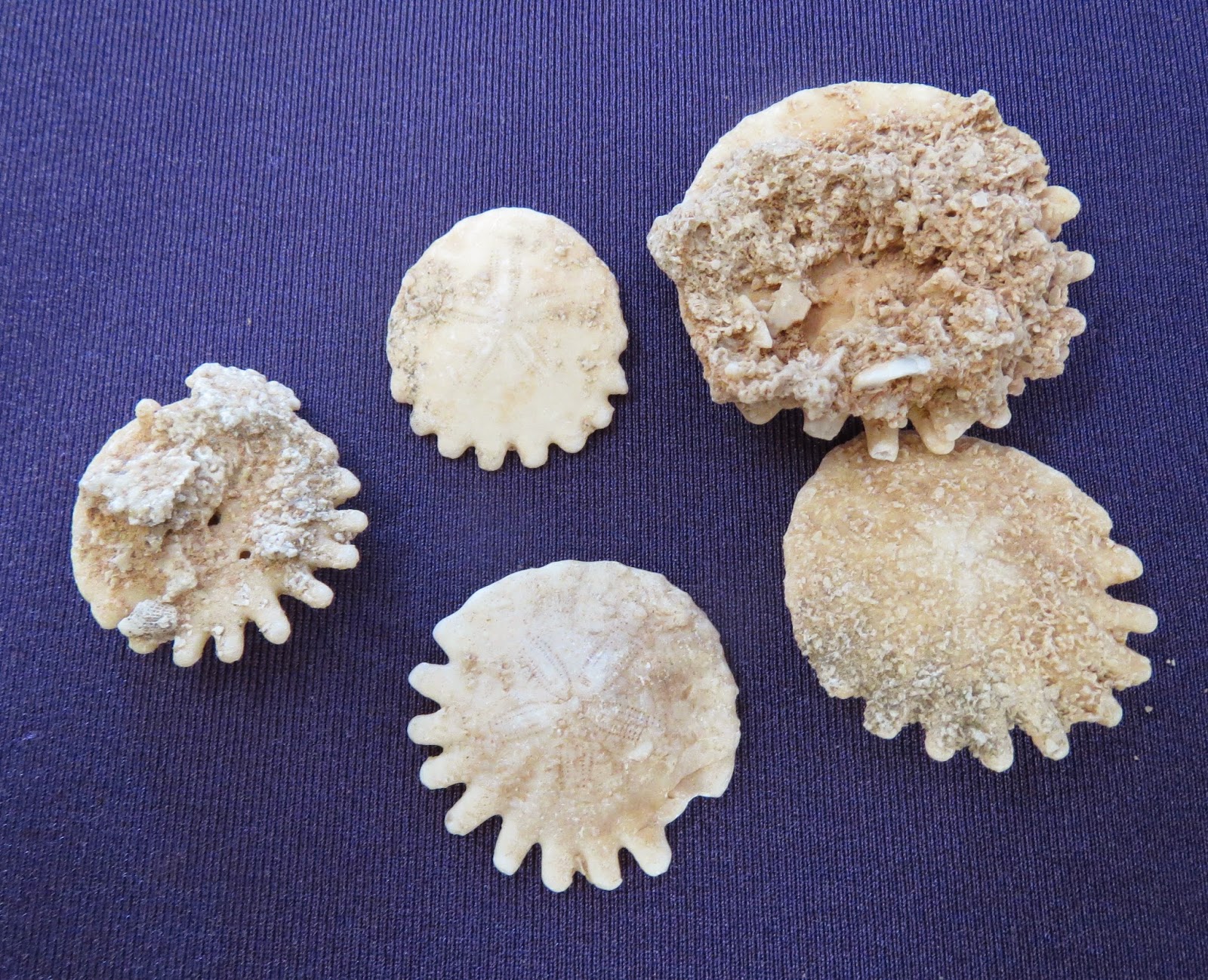 1. The genus Rotuloidea. The first is this relatively simple looking guy.. Rotuloidea fimbriata. This species is only found as a fossil, occurring from the Miocene to the Pliocene (that's between 3-23 million years ago).  Found in Morocco.

2. The second member of this fantastic sea urchin trio is the genus Heliophora!
That is ONE FANCY ass name! The genus is actually Latin for "Bearer of the sun" and you can sort of see why if you see one positioned as such (upside down). This genus includes two species.. Heliophora orbiculus and Heliophora orbicularis. 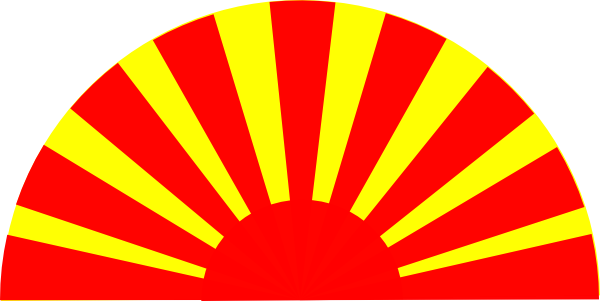 This website recites a legend that Heliophora are actually coins left by mermaids! I wasn't able to verify it, but it does sound reasonable (as a legend of course. Mermaids aren't real.. :-) )

What is going on with all of these crazy flanges??? Its not really been shown exactly what they do. Studies suggest that they might be related to feeding or play a role in keeping the animal from being swept away. (more on that below)..

This species has actually been studied in the field by Joe Ghiold in a paper published in 1985 (note that it is Heliophora, not Rotula as indicated)

His work seems to suggest that these feed like other sand dollars, i.e. in the sand on the bottom. Ghiold suggests that the spines may further function to facilitate feeding.

Also of interest is that the plates which form the perimeter of these animals seems to grow a LOT faster than the more proximal areas. 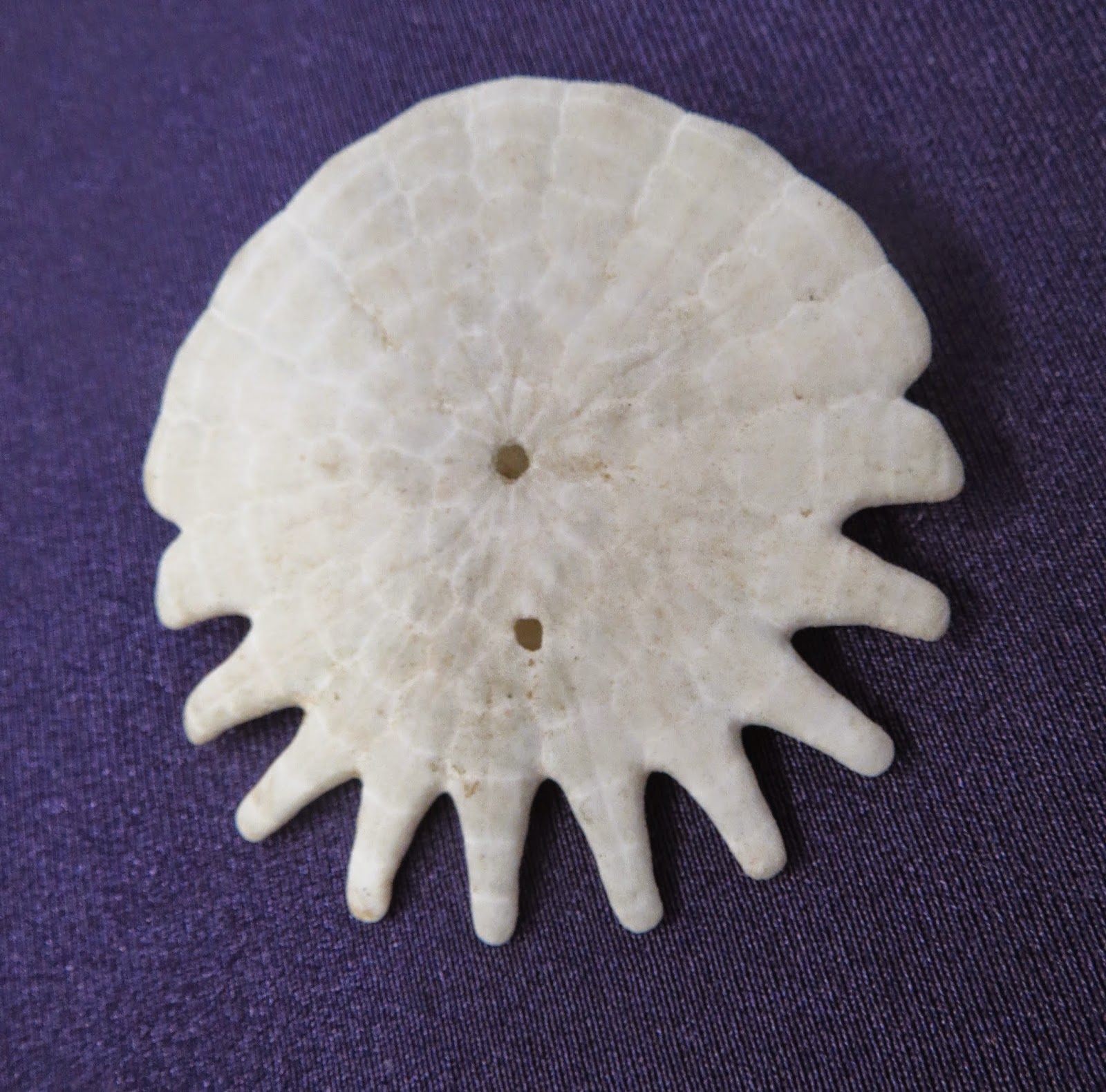 Some members of the genus Heliophora get kinda CRAZY...
3. The genus Rotula. Last but not Least! The scientific name "Rotula"is Latin for "Little Wheel" There is one spectacular species here: Rotula deciesdigitatus. I believe the species name refers to "deci" or 10 in conjunction with "digitatus" or digit referring to the number of flanges or projections.

So the name literally means "Little Wheel with 10 digits"

Note that in this species there are TWO BIG holes!! These are what's called LUNULES. While these have not been specifically tested, an earlier post I wrote summarized how these holes (the lunules) were thought to prevent sand dollars from being gaining "lift" and being "blown" away by water current!!

And that still does not explain the MANY weird "fingers" along the edge! and on only one side! 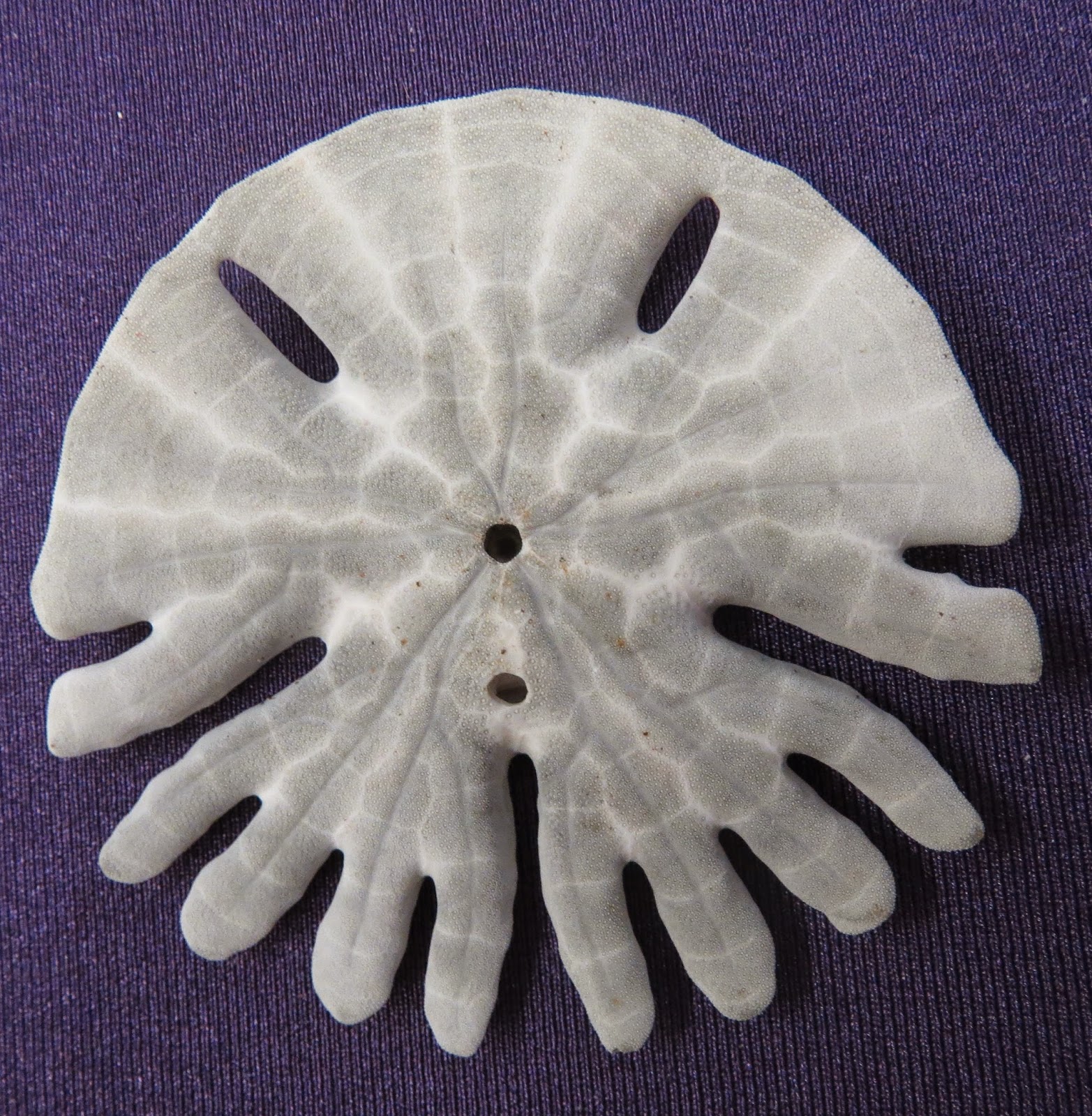 I managed to snap a cool shot of a specimen in Paris awhile back showing the oral side of one of these with ALL the spines or "hair" present...

Living sand dollars are covered by "hair" which are in fact tiny spines that move food to the mouth. 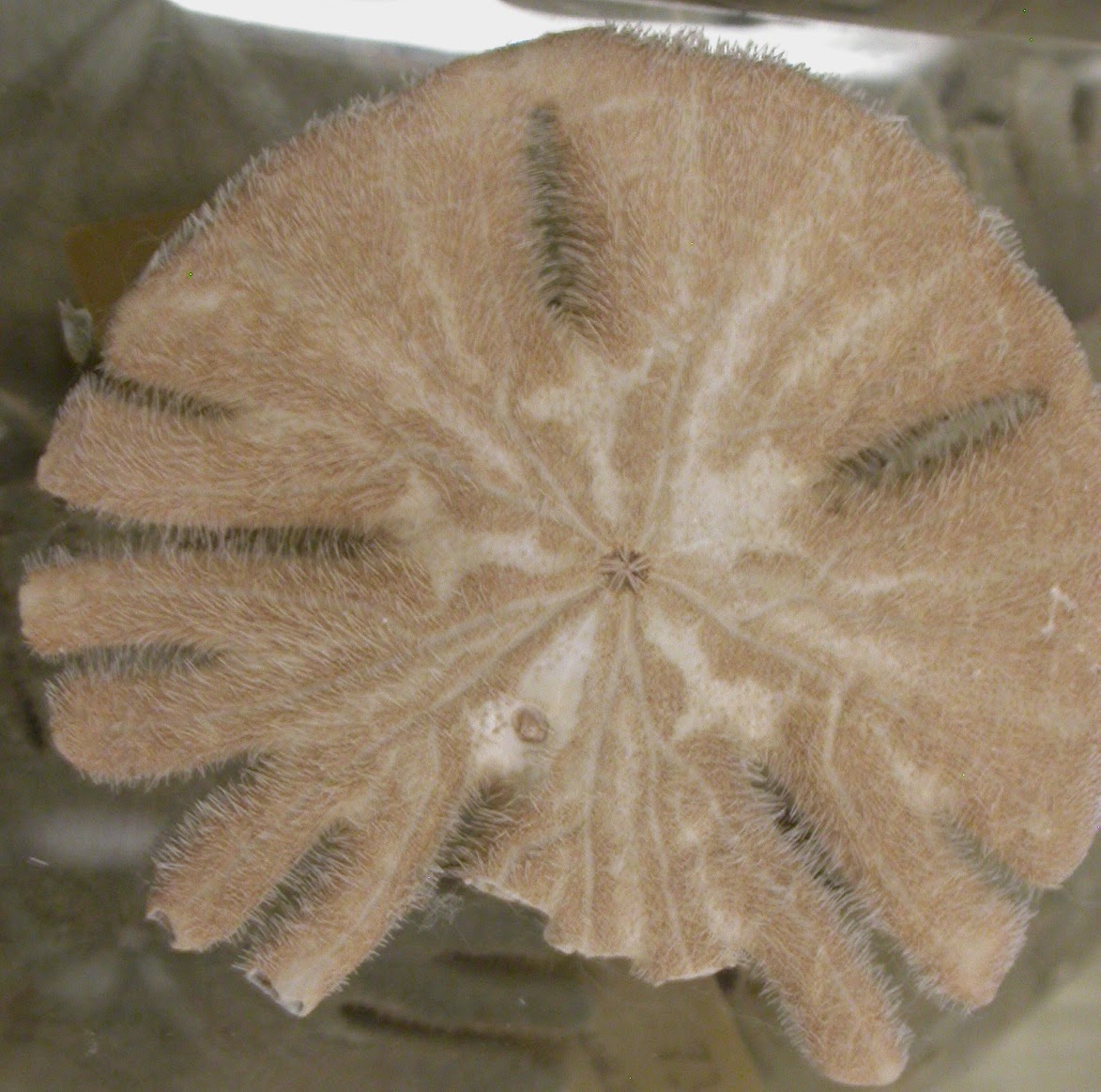 Here's a video of a sand dollar (but not Rotula) with said spines in full motion!  This is the oral side where the mouth is located.


Even for sand dollars, these critters are very odd! Many evolutionary and functional biology questions! What are the flanges for? How do they develop? Why ONLY in this group???  Is there something unusual about the environment that is associated with these flanges and shapes???

They present many tantalizing and interesting questions to the future marine and evolutionary biologists!
Posted by ChrisM at 4:23 AM

Hi Chris, those are weird-ass flanges but the question of why only on one side doesn't seem so weird. If I understood your previous post, these guys have already BECOME bilaterally symmetrical compared to other urchins. Those flanges look to me like they are nicely following the bilateral line.
What seems weirder is that a radially symmetrical guy would ever START going bilateral at all. What do their larvae look like? Do they 'pull back out' bilateral genes from then??
Also... any pics of bunches of them in the wild so we could see if they all point in one direction?
Great post :)

I'm from NC where we have your standard American sand-dollar. :-) Next I came across the Angolan variety - Heliophora. I describe them as rather comet-shaped! And now, I've collected one in Thailand - standard shaped but only two holes. Enjoying the variety in creation!