Since my trip to Japan, I've been watching a LOT more social media from Japan. Their culture, for many reasons, has a deep appreciation of ocean life, especially of invertebrates. The weirder and the more unusual, the better.

Japan is an ocean-nation and as such, via fishing, swimming, and etc. their country encounters one of the richest faunas of invertebrates anywhere in the world.  Japanese pop culture has recently seen a HUGE uptick focusing on interest in deep-sea animals, especially ones like the Giant Isopod: Bathynomus!

This is in part, due to the various aquariums which have had this species on display, including the Toba Aquarium and the Numazu DeepSea Aquarium.

My thanks to Dr. Davin Setiamarga, University of Tokyo for his help with the Japanese!  below...

Defining my Terms. What Species of Bathynomus?
In the big world of the Internet, its easy to start dropping names. Not many taxonomists, and too little information. So, let me take a moment to talk about diversity in "giant isopods" aka Bathynomus.

Bathynomus is a genus of deep-sea isopod which occurs throughout the Atlantic, Indian and Pacific oceans, roughly between 200 to 2140 meter depths. Isopods are of course, crustaceans. You may be more familiar with their terrestrial counterparts which go by many common names: "potato bugs", "rollie pollies" or "wood louse". But they're all members of the same group of crustaceans, the Isopoda.

Its easy to get caught up with the excitement associated with the most famous of all the Bathynomus species, Bathynomus giganteus. It is among one of the largest of marine animals and has an easy name to remember. Its species name literally means "Gigantic" Bathynomus. 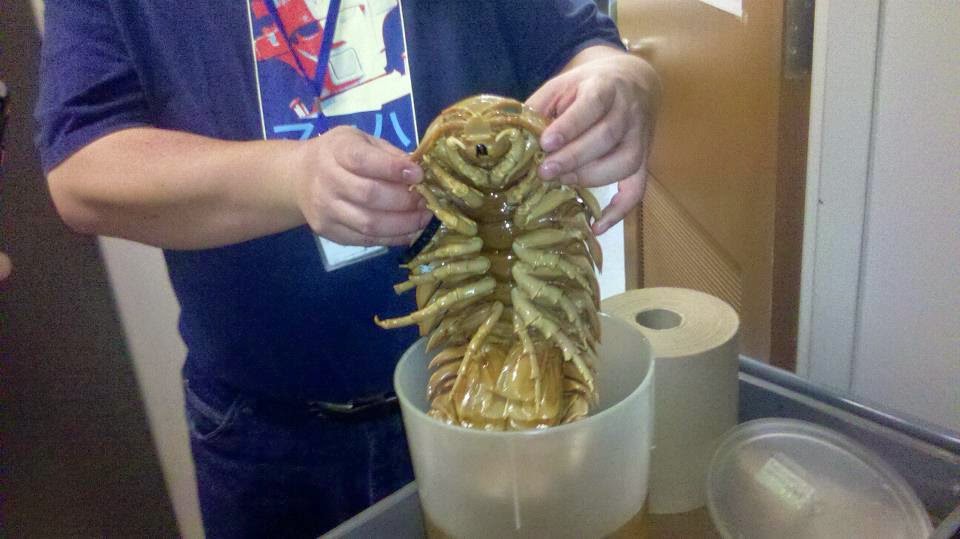 There are about 18 species of Bathynomus occurring all around the world. According to an account by Lowry & Dempsey in 2006, Deep Sea Benthos (here)  they divide the various species into "Giants" which only reach 150 mm (about 6 inches) and "Supergiants" which reach up to 500 mm (almost 2 feet long!).

Yes. They can get to be bigger than a CAT.

B. giganteus, which occurs only in the western Atlantic is a "Supergiant". About half of the known species are "supergiants". A great summary to B. giganteus was written by the famous (now retired) Kevin Zelnio here, from many years ago..

The Japanese species, Bathynomus doderleini gets to be a decent size. About the length of a hand or foot. But it is apparently collected with some abundance in Japan and as such, has been put on display in several aquaria, permitting many interesting things to be learned about its biology.

There was one account earlier this year of an individual (apparently B. giganteus brought from the Gulf of Mexico) at Toba Aquarium which famously refused food for FOUR YEARS before it finally died in 2013.
Interesting Names of Giant Isopods in Japan
The Japanese have a surprisingly consistent naming system used in labelling animals. As far as I can tell, this system is used in addition to the standard Latin names used for various significant species around the world. I've discussed some of these for starfish here.

The popular term for Giant Isopod in Japanese is the word for the armor worn by shogun! Gusoku!  You can sort of see the resemblance: the overlapping plates and the helmet, etc.. 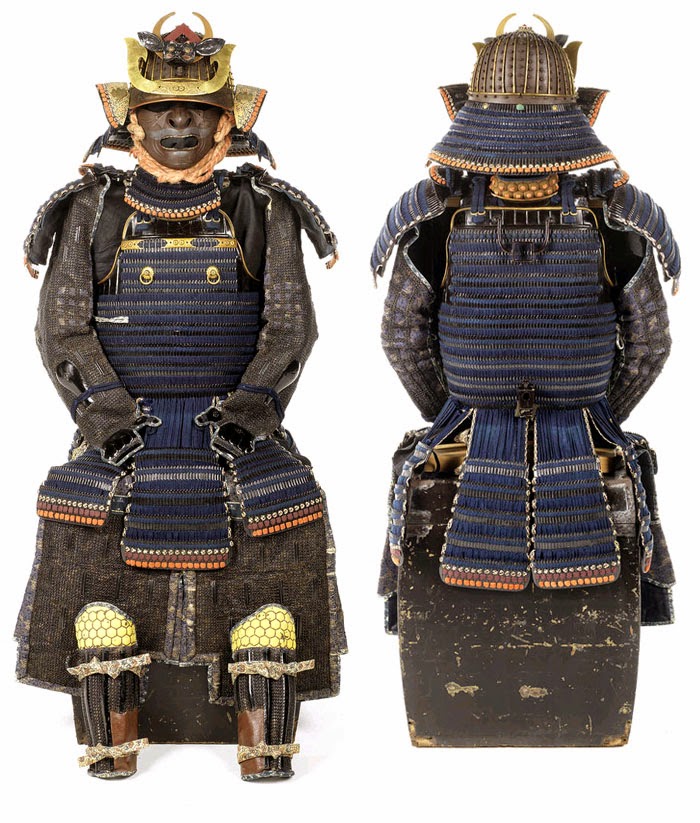 The  name for Bathynomus doederleini, is Oo gusoku mushi
オオグソクムシ(大具足虫)
"oo" basically means "big", "guosku" refers to the armor of the samurai. and "mushi" refers to "many legged insect", "bug", or "critter"
There is actually a separate name for the Atlantic Bathynomus giganteus, Daioh-Gusoku-mushi which roughly translates to "Grand King Armored Critter" ("dai" means grand or BIG).
ダイオウグソクムシ(大王具足虫)


What's that? You want MORE??? here's a bunch of amazing observations, spied via social media and etc. about everyone's favorite deep-sea isopod! Some biological. Some cultural...

5. Bathynomus feeding.
Here is a tank in Japan filled with what is presumably Bathynomus doderleini, Watch the fish put in at 0:15-0:20 then, followed by FEEDING FRENZY and subsequent flesh-free fish skeleton!! Forget piranha.. throw James Bond into a pool full of these sometime!


4. There is a surprising abundance of Japanese Bathynomus products
I gotta say. They KNOW a good thing when they got it!!  I'm an echinoderm fan, but I respect a culture that loves deep-sea crustaceans!

Oh man. I don't even know where to start. 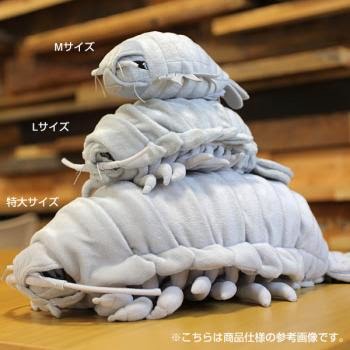 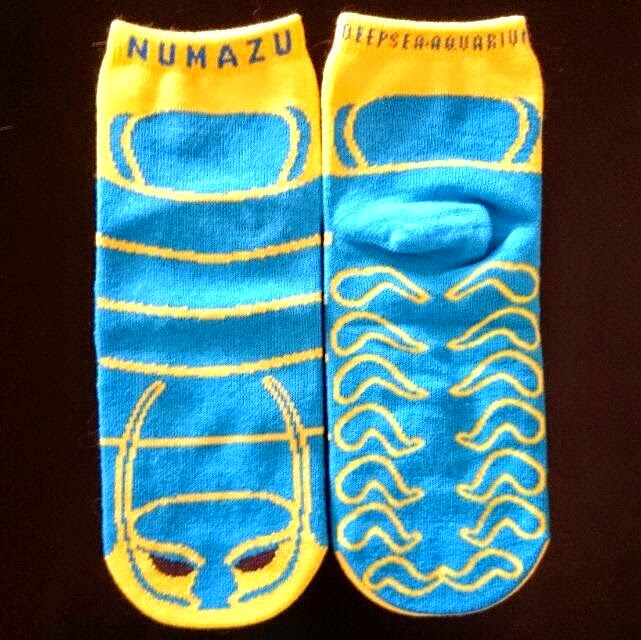 Here was one special item displayed by the Toba Aquarium, a glassworks Bathynomus model!! Wow! 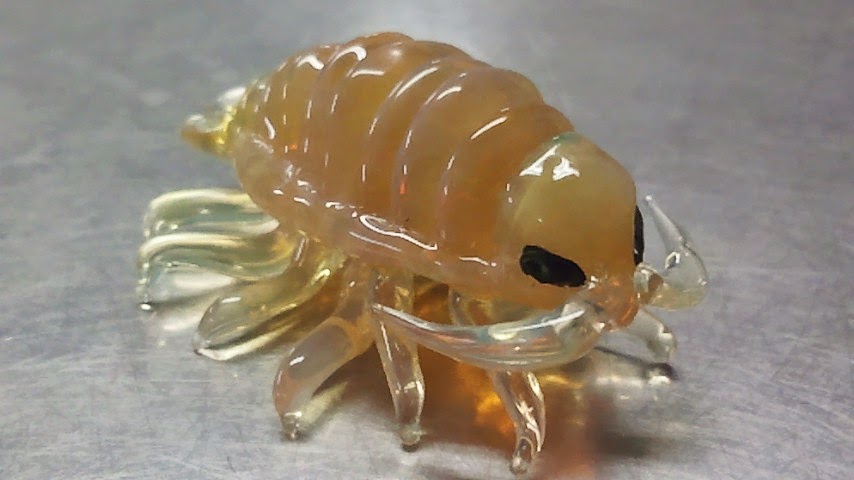 3. People EAT Bathynomus??
Yes. The full story is over here at Rocket News 24.  From what I've seen, this tends to be only B. doederleini, and not the Atlantic B. giganteus.

I only add that Bathynomus is probably NOT a good animal to depend on as a sustainable food source. But according to my colleagues, yes they are edible and not surprisingly, they taste like crab. and are pretty crunchy. Mostly they seem to be deep-fried. But I've heard they also eat them as sushi.

Video report in Japanese is here. But you'll get the idea.

2. Bathynomus Molting
Its not a secret that crustaceans molt. Crabs, lobsters, shrimps. All of them shed their exoskeleton as the body grows. And yes.. isopods also molt. Its been observed in more conventional species.. But has it ever been observed in Bathynomus?? (I couldn't locate an account but maybe it is out there?)

But here is something from the Toba Aquarium's Twipple Account (Twipple is a photohost service).  An AWESOME sequence of a deep-sea Giant Isopod undergoing a MOLT!

How many times do you get to see THAT??

First photo was recorded at 9:21 AM (Japan Standard Time),
This took place at about 10:00 AM. You can see more of the latter part of the exoskeleton beginning to come off..
Based on other pics in the sequence, it got that older bit off around 2pm (JST). This is the fully removed latter half (new skeleton is brown) by about 5pm.
1. Bathynomus Brooding Juveniles! I thought this was amazing. So, I am not a crustacean biologist, nor am I one who knows everything there is to know about deep-sea isopods, but I did a non-trivial search in the literature for an account of Bathynomus bearing live young and I couldn't locate anything.

The Atlantic species. B. giganteus broods eggs, and some terrestrial isopods brood, so brooding juveniles in this species is not a big surprise. Its not clear to me if the Atlantic "gigantic" species does this.

But, clearly, this Japanese species does this. Priceless and awesome.
There is VIDEO OF THIS!!!!


Here's one of those baby isopods... Not sure of the exact size..but looks to be about 1.0 cm long based on some of the other pics.. Awww...,

and finally, BONUS!  a common question I always get, can Bathynomus roll up into a ball like their smaller, terrestrial cousins?
yes.

(with the disclaimer that these are species kept in aquaria, which may provoke unusual behavior not typically seen in wild populations)

Whew! How can Japan LOVE a crustacean so much???

i've always wanted to know: are there eusocial marine isopods?

I know there are eusocial shrimps (synalpheids I think) but I don't know of any cases of isopods which display clearly eusocial behavior.. (but I study starfish...)

Te information is fabulous. I saw it on Twitter as it was forwarded by #expeditionlog

Hello,
Please, what is the exact etymology of the word Bathynomus ?
The greek Bathos means depth but nomus ?
Thanks.
APS

that is a great question! So far, I have asked two carcinologists but neither have known! I will find someone who is better acquainted with Latin etymology and return with the answer shortly!

Mary Wicksten at Texas A&M university tells me that it likely means "Deep Wanderer" or "deep nomad" as derived from the root of "Nomad".. but unfortunately the original etymology of the name was not clearly outlined in the original description and so, the author's original intentions are unclear.

thank you for the question! Very interesting!

And the answer is beautiful even if hypothetical.
Thank you very much for researching and reporting, Christopher.
Alain-Pierre
DORIS.ffessm.fr

I saw a video a year or so ago of a Japanese scientist releasing a shark from a cage on the bottom. It appeared it was attacked by one of these. It seemed to clamp down on the sharks head. Water got to mucked up to see what happened after. Quite impressive! Look it up on YouTube, probably under released shark attacked.