Pyritized Fossils! All that Glitters is not gold...sometimes it's MORE!

This week, I crack open my geology files and tell you a little about an interesting preservational process known as pyritization!

This is actually a special type of preservation called permineralization, where an inorganic mineral "replaces" or forms a cast of a particular structure. Mostly hard parts, but soft parts are also replaced, as we'll see.

This mode of preservation actually involves biology!! Bacteria, which are present during the decay of the original organism will produce sulfide. If you've ever seen something dead and buried, that rotten egg smell that accompanies the blackened tissue is the sulfide.

The bacteria in combination with minerals in the sediment/soil can lead to unusual conditions leading to the formation of pyrite which eventually becomes infused with the fossil, sometimes replacing the hard parts and sometimes even the soft parts..

Here are some neat examples...

Some show exceptionally fine details!  Here are sutures on the shell..


And pyritized detail inside the shell

Endoskeletons and soft parts can also be pyritized, resulting in exceptionally preserved specimens!

Here is the Devonian Furcaster paleozoicus..a Paleozoic brittle star from the famous Hunsruck slate in Germany

A nice write up of this area, and the exceptional preservation seen there can be found on this website.                    .
A Pyritizied Devonian crinoid Arthroacantha 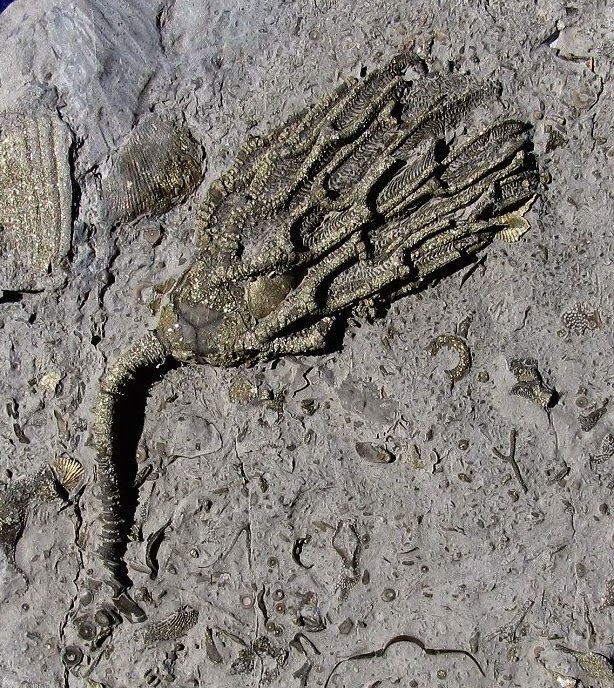 But probably one of the most exceptional examples of pyritization is when it captures soft tissues, such as on the trilobite, Triarthus


There were actually soft parts preserved on these trilobites, allowing for some fairly accurate reconstructions of the morphology...


Here's some with a size reference... the soft tissue preservation is remarkable...


and even trace fossils! Here's a worm tube with crystalline pyrite!
Posted by ChrisM at 6:14 AM