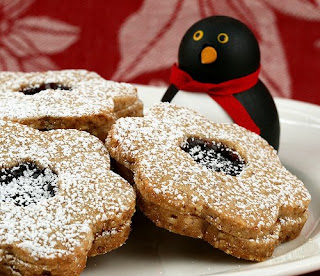 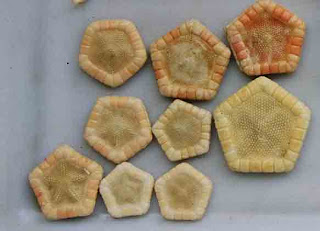 Earlier this week, we saw starfish such as these neato-pentagonal...nearly discoid starfish in the family Goniasteridae in the genus Sphaeriodiscus doing a really good impression of Linzer holiday cookies.... (mmmm..) 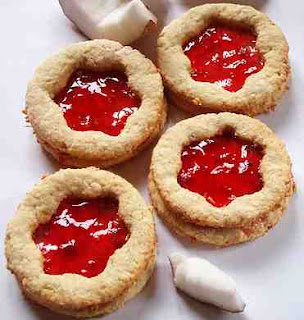 Before I get into things too deeply, I wanted to credit this AWESOME site, Discovering Cretaceous Echinoderms. Click here to see all of what's below and more!

It turns out that goniasterids with this pentagonal body form have been around for quite a long time. 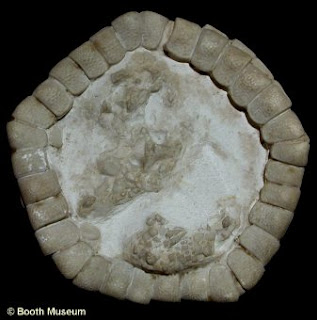 Most starfish have a really poor fossil record, mostly because the little tiny bits that make up their bodies fall apart not long after the tissue that holds them together rots and gets washed away.

BUT, goniasterid starfish (and other similar taxa) have pretty heavy body skeletons and so, the chances of such a body being preserved increases, especially when there are good environmental opportunities for the animal to be buried quickly...such as in marine environments on a sedimentary bottom.

In the Cretaceous (about 65-145 million years ago), the world is a familiar but different place. 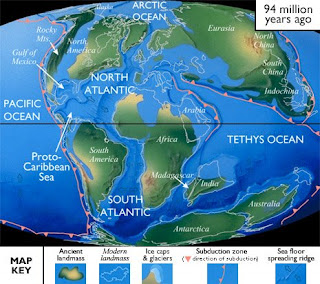 (this map is from UCMP Paleontology Portal)
Many of the landmasses are there..but the oceans extend much farther beyond what we know today. There is a massive inland shallow water (i.e., epeiric) sea cutting through Texas and most of western North America. Effectively leaving what we know of the west coast today as an island.

Note that most of northwestern Europe is underwater. This is partly what makes for an unusually well preserved starfish fauna in this part of the world!

The Cretaceous of Europe..especially as studied by English, French, and German paleontologists has documented a huge diversity of fossil starfishes.

This region is famous for its chalky marine deposits...and it is here that we find some of the most abundant spectacular fossil starfish in the world. 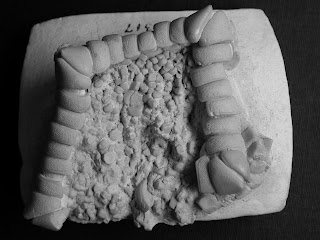 Perhaps one of the best known of these Cretaceous starfishes are those species in the genus Metopaster, whose name alludes to architectural structures known as metopes which are "rectangular architectural elements between two triglyphs..".

These were often ornamented or had elaborate sculptures. 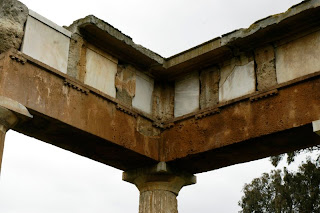 (Metopes are the white blocks between the brown) 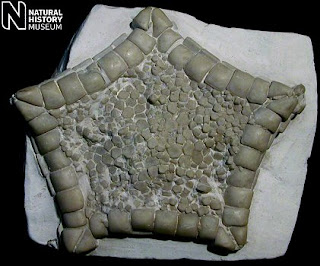 Don't be fooled by these amazing specimens though! I'd say 98% of the total number of Cretaceous starfish fossil are actually recovered as little pieces called ossicles. 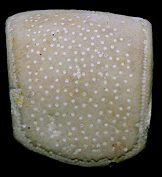 and can often be found in the hundreds of THOUSANDS.

Much of the European foundation for Cretaceous asteroid systematics is based on the abundance, description and interpretation of these ossicles.

Genera and species have been named solely on the ossicle bits alone.

A lot of it is very tricky..and often involves reconstructing the ossicles, once you've got an idea of what the original body looks like. 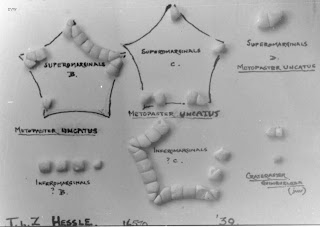 (This chart was borrowed from this excellent account of asteroid paleontology in Europe by E.V. and C. W. Wright)


And are often compared with living examples...such as this beastie... 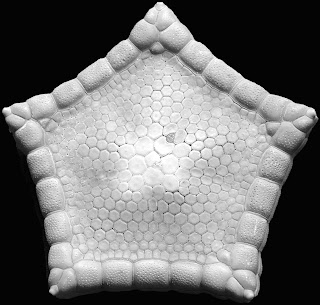 (Eknomiaster beccae)
And often, they will just plain luck out like this specimen and find an actual preserved skeleton! This, is essentially like getting a key to a very hard exam! But it does give you some idea where all the parts go!

That being said, sometimes you get a compromise and you often only get ONE side... 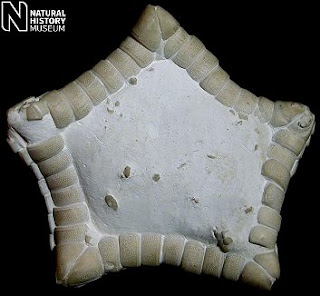 Interestingly, a LOT has been done with starfish "ossicle systematics". My colleague Loic Villier & his associates for example, have been finding a lot of evidence for predation from these fossil bits.

Christian Neumann has found evidence for shark/fish predation on ossicles.

Other ossicle studies have provided insight into the evolution and macroevolution of Mesozoic goniasterids through time!

Ironically, we may actually know MORE about the ecology and biology of Cretaceous goniasterids then that of the living ones!!