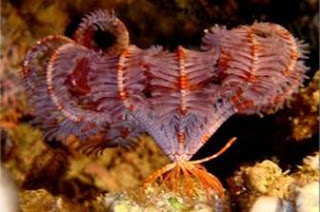 Today..the SECRET LIVES of FEATHER STARS! (HINT: wait for the twist at the end!)

In many ways, feather stars (aka crinoids-owing to their membership in the Class Crinoidea) are among the most mysterious of echinoderms. We know them as fairly stationary flower-like animals that feed passively as water currents flow by them... 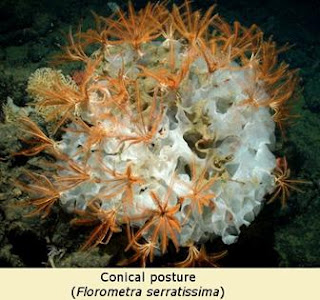 They don't really pursue prey and they seem pretty quiet and keep to themselves, even for echinoderms.

Are they even animals? Even starfish and sea urchins kind of move around and do stuff. What sort of stuff do crinoids do??
Some can maybe capture bigger prey...

and some stalked crinoids are in a game of cat and mouse with predatory sea urchins! (usually as the mouse!)

A recent conference and exchange with researcher Greg Rouse at Scripps Institute of Oceanography reminded me of the SECRET, SECRET lives of feather stars (=unstalked crinoids or just "crinoids" from here on in...) [note-SECRET details herein are from Haig & Rouse 2008)

First, some basics. You got your adults and they produce your eggs and sperm. You get your gametes together and pow! You got them together to form a doliolaria larvae!! 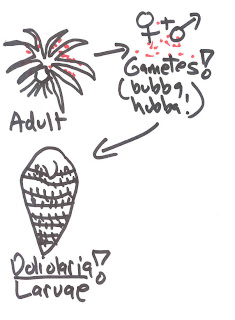 (this image from this helpful site)


So what happens after that?? Pictured here is a series of what happens!!! The doliolaria settles and begins to TRANSFORM!!! Into this sort of weird transition before it becomes a weird protolarvae called a cystidean larvae!! 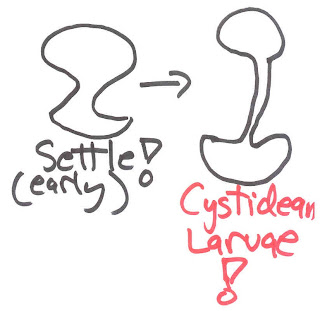 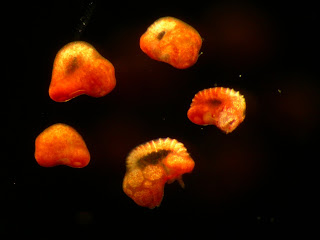 The three pea-shaped thingies in the top upper left-hand side are doliolaria as the larvae slowly changes into a cystidean larvae. (Development is clockwise youngest to oldest from left to right) 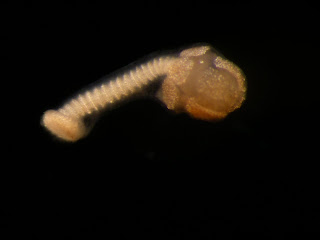 But WAIT!! The cystidean larvae doesn't look at all like the weird feathery thing we started with....

To recap: TWO KINDS of crinoids are alive today.

"Unstalked" crinoids are those which are basically a skeletal cup with a bunch of arms, sometimes with little "legs" called cirri. The great majority of crinoids alive today...especially in tropical shallow-water or in many cold-water settings are unstalked or "comatulid" crinoids.


There exists a much older crinoid body form known as the STALKED crinoids which are seen primarily in the Paleozoic fossil record and today live in the minority in largely deep-sea environments.

Keep that in mind...and let's get back to the story...


As the cystidean larvae gets larger it actually starts to develop a base, a stalk and a feeding cup...

But THEN, the as the larvae grows, the TOP cup part??? It starts to form little cirri/legs and as it gets bigger and bigger...the cystidean starts to look more like a little tiny stalked crinoid.

Once the feeding arms and etc. have become fully formed..it reaches what's called the pentacrinoid stage. 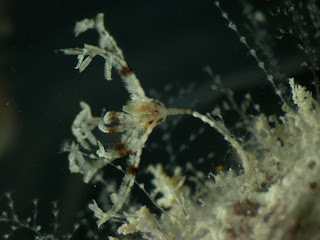 The top, cup segment of the pentacrinoid stage develops until this happens: 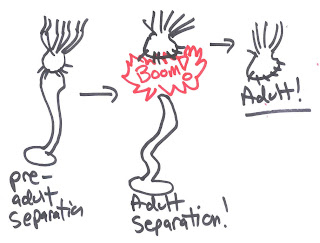 (note that in the real world the crinoid pentacrinoid stage does not go "BOOM!")

The little cup matures and BOOM!! It separates from the stalk!! and the "cup" is what we see as the adult stage of the "unstalked" crinoids!!


And on top of that is an important evolutionary lesson. "Unstalked" crinoids are DESCENDED from Stalked crinoids!!

We see the ancestry of these animals in their life cycle!!The thing with crinoids? the lessons are subtle but VERY rewarding!
(special thanks to Jodie Haig & Greg Rouse for the images!)

what happens to the stalk after the separation? does it produce more adult forms, or does it die?

ha! that is a good point! I assume the stalk is just discarded after the animal separates.