...from Hawaii: Something you don't see every day Coscinasterias acutispina! 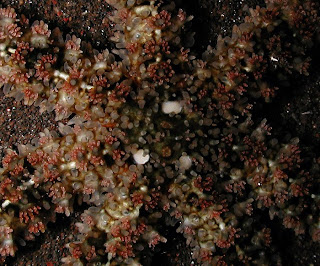 Today a cool pic of an uncommonly seen starfish from Hawaii! Coscinasterias acutispina!

The animal was found by Pauline Fiene and was photographed by nature photographer Cory Pittman (and should be copyright by him). Both Pauline and Cory oversee the cool Sea Slugs of Hawaii site. 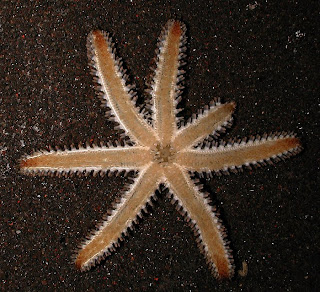 Coscinasterias acutispina is an asteriid-that is, its related to those common intertidal starfish, such as Asterias or Pisaster that feed on mussels and clams on the east and west coasts of North America. 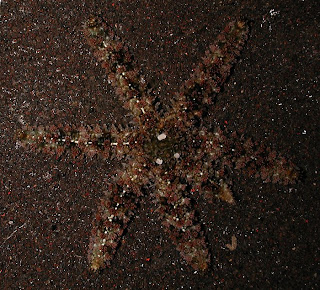 The beast above was observed in Kahului Harbor in Maui. It's about 30 mm in diameter and was found at less than 3 m depth, under rubble. These have been reported from Hawaii in the past, but have been so infrequently encountered that they are actually absent from the excellent Hawaiian Sea Creatures book by John Hoover.

Generally, starfishes in the family Asteriidae occur in cold-water regions like Antarctica or Alaska, but every so often-you get a couple that pop up in temperate to tropical shallow waters. For various reasons, asteriids and other forcipulatacean starfish don't generally live in tropical shallow-waters. So, seeing one outside of temperate water is unusual.

Coscinasterias occurs rather widely though, and you can find other species from New Zealand to the tropical Atlantic...Here's some basic taxonomic info..

This species also occurs in Japan, China, Australia, and other regions throughout the Indo-Pacific. Here is a pic of this species from Japan.... 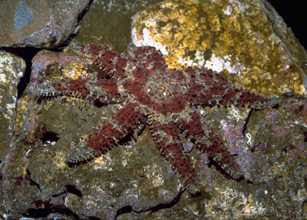 (pic taken from Chiba Museum site)
where it is known by the name yatude hitode, which I believe means "evergreen-palm leaf starfish" (Thanks to Yoicihi K. for the heads up!)

Coscinasterias acutispina is unusual in that it is fissiparous (i.e., it can reproduce asexually-by pulling itself apart), has between 7 to 12 arms and feeds on limpets and other small mollusks.

And thanks to the wonder of Teh Internets! Here is a Youtube Video of this species (but from Japan..I think??) !!

EDIT-Note that there are tiny, little snails on the underside that might be parasitizing the starfish (I don't think they are being fed upon). Thanks to Mudskipper for the call!

Were those parasitic snails on the bottom of Coscinasterias in the video?

hmmm..you may be right! I'll make a note of it!

Echinoderms Rock! The more I learn, the more impressed I am. http://planetearth.nerc.ac.uk/features/story.aspx?id=581

What a great discovery! This sea star is common in Japanese waters; Yatude means a palm-like leaf of the evergreen, Fatsia japonica in Japanese.